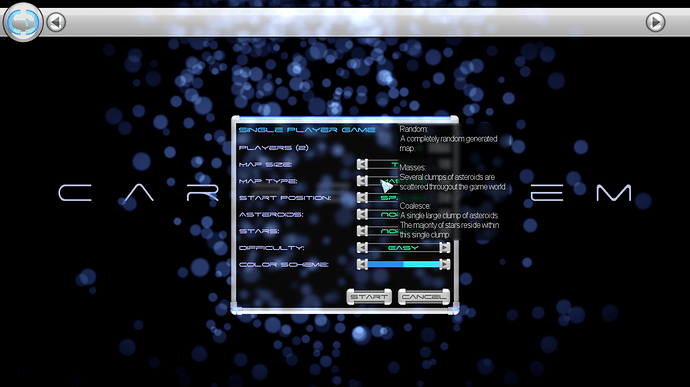 I’ve modified the jME3-core, jME3-niftygui and nifty libraries used by jMonkeyEngine3.0 to allow for the use of custom materials on any NiftyGUI element. You can download these new libraries along with documentation and source code here: jME3_CustomNiftyMaterials.zip - Google Drive

Basic usage is also quite simple, once you’ve loaded your NiftyGUI Element, be it a panel, button or any other Nifty Element, just obtain a reference to the Element, such as with Element.findElementByName(“MyElement”) and call Element.setImageMaterial(Material) or Element.setPlainMaterial(Material).

What did you have to modify in jme3-core? That seems wrong.

I didn’t really have to put it in the core package, but I did just to keep things organized properly. I modified the way nifty nine-part images were drawn.

In the original release nine-part images were drawn nine times using a single quad for each part. I added a sixteen vertex mesh used to draw those images just once and placed that mesh in the com.jme3.scene.shape package. It’s the NinePartQuad

So the only addition to the core package is the NinePartQuad.

So the only addition to the core package is the NinePartQuad.

That makes it harder for anyone using your code since now they won’t be able to upgrade regular JME which changes way more frequently than Nifty. Just saying.

Well I didn’t know that, but I have to say as long as I’ve been using jME3.0 none of the libraries have ever been updated.

Besides I made this for my own personal use and only posted it because someone asked for it.

Well I didn’t know that, but I have to say as long as I’ve been using jME3.0 none of the libraries have ever been updated.

Besides I made this for my own personal use and only posted it because someone asked for it.

Fair enough. It’s up to you if you want to make it more usable or not but it’s entirely your prerogative, of course.

I haven’t looked at the 1.4 source, but I imagine if one were to want this functionality in jME 3.1 it’d need to be rewritten for Nifty 1.4 anyway.

I was kinda hoping jME 3.1 might support Nifty 2.0, but it looks like Nifty 2.0 development is moving along at a slower pace and wouldn’t be production ready by the time jME 3.1 is.

Going forward, JME will be publishing maven-style artifacts to jcenter soon. At that point, it’s possible that nifty could evolve at a different pace.

I understand why you did things the way you did but still, if you hadn’t required the jme3-core change it’s possible that your stuff would work fine with 3.1 and the even the older nifty. Not sure.

Nifty 1.3 might work with jME 3.1, haven’t looked at the 3.1 sources, but even still I don’t think anyone would want to downgrade to Nifty 1.3 just for this.

I’ll download the Nifty 1.4 source and jME 3.1 source tonight or tomorrow and see about making a download available for 3.1 users. I’ll be sure to stick the NinePartQuad in the jME-niftygui package

Okay I updated the original post with a link to the jME 3.1 Alpha 1 version and I did move the NinePartQuad to the jME3.1-niftygui package

I have NOT tested this as I do not have jME 3.1 Alpha 1 installed. Moreover I used Eclipse to build the jars rather than Gradle so I’m only pretty sure that I put all the necessary resources in the right places. If anyone wants to test this and let me know if it works…

Was gradlew dist not working for you? Weird to do it the harder way.

Actually it was probably a lot faster. My connection tops out at 75KiB/s, but usually sees about 30-50KiB/s.

According to DNF, Fedora, installing Gradle would be about 108MB, so probably fourty minutes to an hour, plus apparently the dependency libraries are no longer included with the zipped jME source download and are instead downloaded by Gradle while compiling so…

Now my mobile connection is 4g up to 2GB per month, but apparently T-Mobile found a way to throttle it when tethering to a computer because starting earlier this month when doing so my laptop only sees 15KiB/s while downloading the same on my phone sees 1MiB/s.

So I downloaded the Nifty and jME sources on my phone and transferred them, but obviously I could not do that with Gradle through DNF or with the dependency libraries through Gradle.

For any who were using the jME-3.1 package of this I have uploaded a new version at the same link. While the original works when running your game through the SDK, an error prevents your application from compiling when using build or clean and build.

Apparently this is due to a bug in java when compiling a class that contains an enum with certain types of annotations using Eclipse or Intellij. A bad signature is generated and this is the error you’ll get when building with the SDK. 388314 – @javax.annotation.Nonnull triggers bug in javac

I re-compiled nifty1.4.1-CustomMaterials.jar with ANT and I am no longer encountering the error myself.