This project won’t be developed any further

Aim: loading textured scenes from blender to jme3 without having to go through the exporters.

Of course it doesn’t handle (and will never do) the plethora of modifiers one can apply to a blender element (subsurf, mirror… you have to apply everything in blender before to save).

That's a fantastic feature to have, thanks!

Ooohh, this will be so great to have in jMP! Gotta add automatic j3o re-conversion when the original changes soon

The big problem for me isn’t to get the animation data out of the a blender file, it is a very straightforward format. The problem is mapping what i find to JME3.

And animation is the bottom of my knowledge of JME3 (it’s a pretty flat knowledge anyway).

Just to give you an idea, I can’t even get the animation system to move one vertex of one triangle with a skeleton made of one bone, and from scratch, not reading some exotic file format.

So given what i know of jme3 now, to get the animation i have to create a new animation library but forking an api that isn’t even in beta doesn’t look very good.

Anyway, i should first get rid of the cube. Here’s the first uv mapping attempt:

the bad news is that the way i re-index the UV’s is cleary wrong, i have to find why.

The good news is that the material support includes (entirely through Lighting.j3md):

i have not tested it yet because of the UV madness but the system is in place.

Ooook, i have to work on the shininess-roughness factor, testing if there’s something wrong and so on but here’s a blender model taken from: 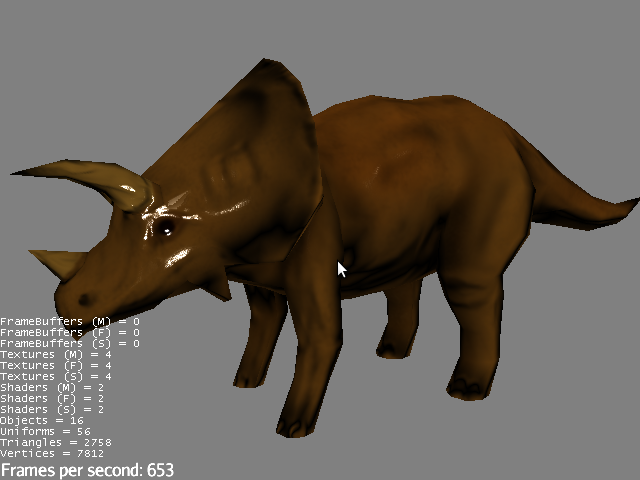 The geometry looks ok, the model is a bit too dark so maybe something is wrong with… well, something. Got to check…

Currently I am improving the file support in jMP so that a model loader plugin can provide all AssetManager configuration etc. itself and then just supply a Spatial to the rest of the system. This way new loader plugins like this can be seamlessly integrated (add to scenecomposer etc.). Atm its only possible to use external importers to convert to j3o format. I think I will add a little info file now that points to the original file and loader so the automatic re-conversion on external changes can be built in.

Remember the "3 times dumb rule" when designing the interface :D.

The 0.0.3 version of the loader will address a "problem" in an arbitrary yet reasonable way.

Problem: a blend file is a workspace, it stores all the construction-lines the user needs to obtain a scene. Among these helper structures there can be meshes. Think of a high polygon count mesh used to create the normal map for a low polygon model. The loader extracts from the blend file just the parts that compose the "visible" scene, the final result (always in therm of meshes and materials).

Arbitrary solution: the loader loads just the objects that are in the first layer of the workspace so that the user has to put all the meshes that are not intended to be part of the final scene in a layer > 1

I chose this solution because in blender you can set more layers to be active at once, so the document can show to the user everything while just what's inside the first layer will be exported.

I think thats a good solution

I added a jMP import plugin based on the jar version to the contribution update center.

out of the box (+ light and rotation)

I desperately tried to understand how I can export a geometrie from Blender for an utilisation in Jme3.

Regarding, what saying in this page, I dont understand how I can load “.blend” files directly throught JMP…

the link below don’t give the code to do like the picture samples presented.

As regards the method which consist to add files of BlenderExport in the blender repertorie, it is impossible to me to found the folder .blenderscripts !!

For informations I have blender 2.57, windows XP and I installed Python 3.2.

Thank you for your responses and your advices .

As indicated in the top post and title, this project is deprecated. There is a new Blender plugin in the works. If you have the latest jMonkeyPlatform installed, you should be able to find it in the plugins tab (though I’m unsure how mature the 2.57 support is).

The alternative would be to export your Blender model to OgreXML and just use that, as jME3 natively supports this format.

I was able to load a fairly simple 2.57 model with the new blender loader.

Its becoming quite stable to be honest

Sounds great! @Kaelthas will have to make an announcement about it then

Closing this thread. Further questions about Kaelthas’ Blender project can be posted in this board (user code and projects).