In the vein of “found play”…

I’ve been goofing around tonight with mineral layers and rock strata tonight trying to get the terrain generation better built out. Since I can have as many light blocks as I want, they make a good way to visualize what will ultimately be the “mineral rich” layer since I can wander around the world at night and see if any of them are naturally exposed (because what fun are mineral deposits if a few don’t show up in cliff faces from time to time).

Anyway, this first screen shot shows coming upon a whole rock face with several areas of deposits and you can also see them deep under the water (another benefit of the lights). I thought it made kind of a cool looking picture even if it’s stuff that will ultimately be reversed for the ‘real game’. 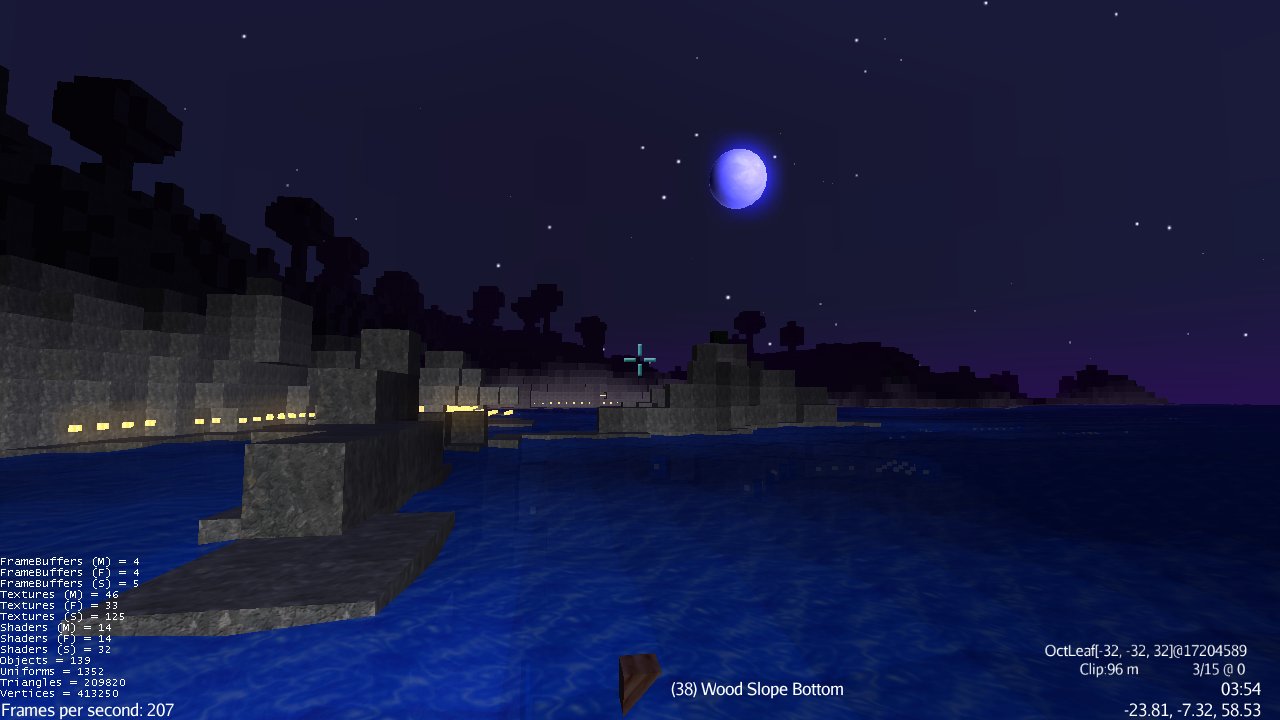 Then wandering around some more, I happened to notice that some of the trees had been turned to stone. My stratification routines ere being a little overzealous… and in this area, it was pretty widespread.

I think it looks kind of cool as something to just happen upon. I’m going to fix the problem that caused it because it’s just too much but I’m going to see if there is a way to bring a ‘petrified forest’ like this more naturally into the generators because it’s different.

this is cool stuff.

so i am assuming a player would mine this ore or mineral?

what are some possibilities of what they could do with it?

At the basic level, similar to other resource collection games where finding iron ore lets you build better tools, you might come across different types of stone to build with (black marble is on my to-do list), etc. and you need coal to fuel your fires and so on. Gold dust and nuggets can be traded for things at stores and/or used on other types of components.

But it will be the gemstones that some players really seek out since those will be useful for constructing magic devices. The idea there (if I can flesh it out enough) is that different gems have different energy focusing properties and when used in concert and the right configuration will manipulate those energies similar to electronics. I’m still designing the “world physics” that allows this to happen in a way that promotes emergent play but the game goal is that any type of magic device you’d see in other games might be constructed by manipulating these elemental energies.

The above tests were showing where minerals are likely to be rich… just because a light appears in the picture above doesn’t mean that it will actually be minerals. Just a way greater chance that mineral veins will appear there. There is a random chance that they appear anywhere. And some thing like astral and spirit crystals will probably only appear randomly as a byproduct of digging sand or something.

…still working it all out and have to get the base engine working and networked first.

So, playing by your “living world” concept, here’s an example scenario I could imagine myself enjoying as a player:

I encounter the petrified forest; bummer, this place used to be rich with life!

→ I wanna fix it (I really like fixing things, especially when it’s got to do with being ‘off balance’)

I think the trees and anything else that’s petrified (animals?) is probably beyond recovery (unless I’ve gained some pretty rare spell/tool/technique – maybe I can bring petrified animals back to life, but not trees), but maybe in their petrified form a different type of material has been created. Therein also lies the dilemma of harvesting the animals for material, or hoping to bring them back to life some time.

What I want to do is see some growth around here. There’s a stream nearby. With some digging I can fork that stream to pass by here. Alongside the stream I’m gonna replenish the ground with fertile soil and I’ll plant trees there (maybe I’d need special ones with pretty aggressive roots so they’re not disrupted by the petrified ground, e.g. baobab trees). At the end of the stream I’m gonna try construct a little oasis of sorts, maybe re-purpose some of the petrified rock to stylize it a little.

Now I just need to figure out a way to get petrified forests back in a way that doesn’t cover two whole continents.

I do really like the idea of having the petrified materials do something special… and that maybe some magic energy of some sort causes the petrification in the first place. Because that leads to a few logical implications: 1) you may still have to find the source of the problem if you want to fix it, 2) you can cause this to happen on purpose if you figure out how to harness that energy, 3) some really cool destructive possibilities for an evil player.

He hey, yep. For example, say ‘the source’ is retrievable. Find it and you can find a new home for it elsewhere. Mwuahahahah!

Exactly. Or figure out how to work it into a component that can be used in a wand or something.

And even still, just grabbing the source, you’d be left with the moral choice of ruining other patches of forest to collect the exotic stone.

And maybe it can’t be destroyed, so you have to put it somewhere