All models are work in progress at the moment.

I want that aesthetic but for smooth driving the ground needs to be smooth, thus higher poly. Although I picked it because it’s easier to make models for.

Was running this game on a laptop hence the bad shadows, I have better settings commented out.

Only open source car sound I could find…

Funny story about the tyre marks, they completely don’t work on my dev computer. So I actually forget what they look like. Source code is somewhere here https://github.com/Murph9/RallyGame/blob/master/src/car/MyWheelNode.java

Thanks for the feedback.

I made the model sheet very modular so it is actually easy to change colors I hope I can make the model textures the same but we will see…
How does this one look? 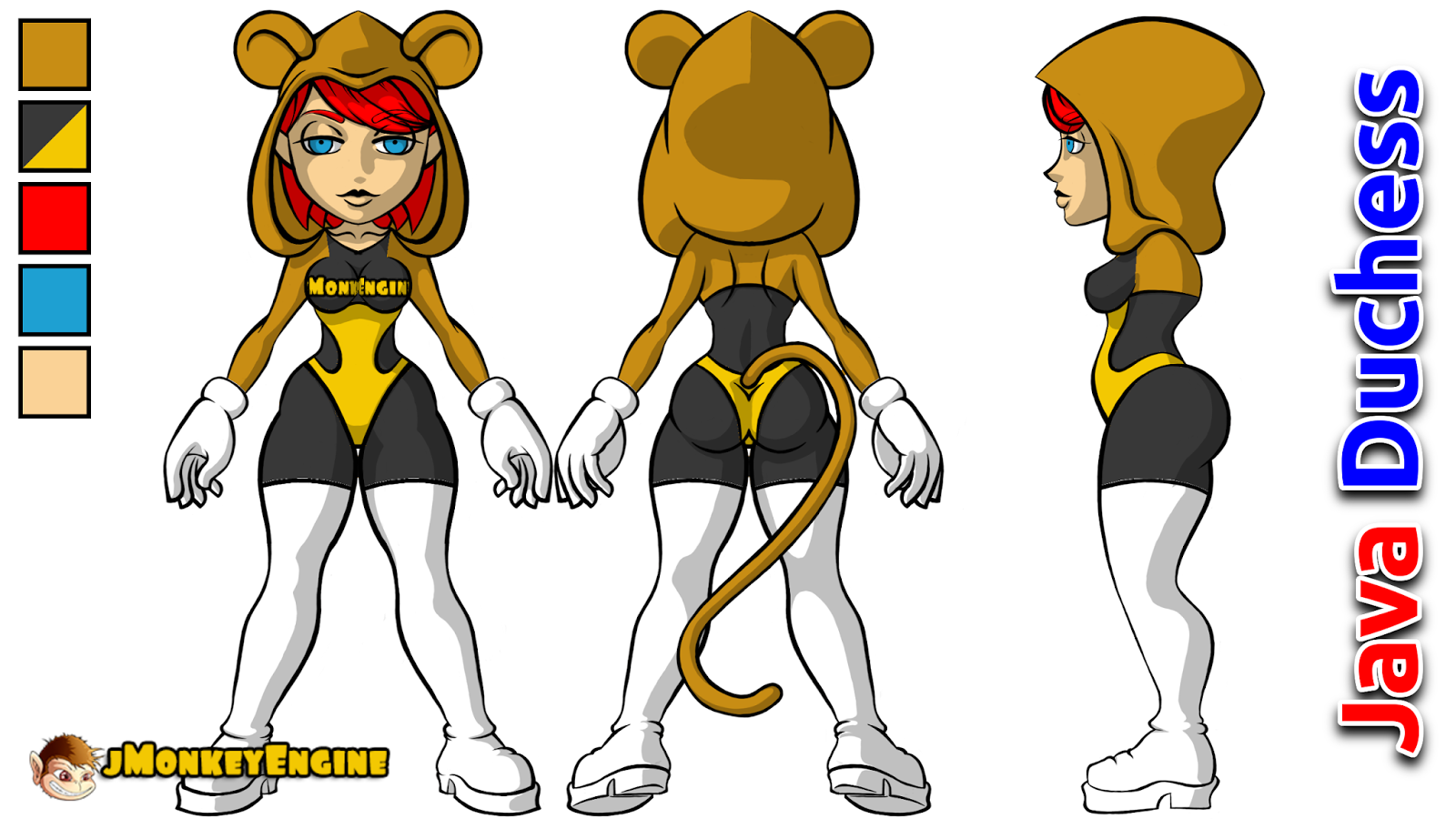 I approve of the logo placement.

Refactor, refactor and refactor. That’s been what we’ve been doing for a while, except when we had a little development break and played games instead to regain some inspiration. Space Engineers, Arma 3, Osiris Dawn, Cities Skylines, Ark: Survival Evolved and Civilization VI has received some attention instead.

We use a more event driven system now for generating the world; generating walls, floors, roofs, etc. Trying to refactor so we use the same type of validation when placing lobby items, outdoor items, escalators, stairs, etc. This means that we need to update all our item definitions, which probably are about 100 items now. Some of the items are not tile adapted, so we will probably remove some of them.

What you see in this image below is when I’m testing validation and valid highlight when placing stairs. The highlight is based on the toon outline filter. 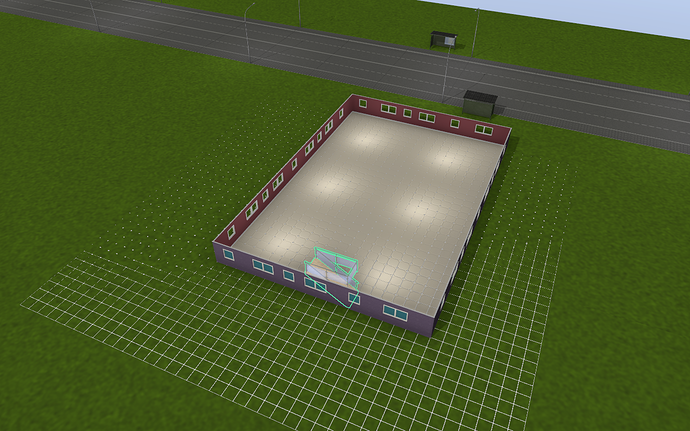 You can also read our devlog that we published last week:
https://hub.kendanware.com/t/skylimit-tycoon-first-step-of-graphics-redesign-complete-more-to-come-12/79/1

Now that I have finally decided to get off my ass and do something, I figured I didn’t like how my DingoEngine worked so i scrapped it and made a NEW ONE!!! So Dingo Engine 2 is coming close to being released, I’m just going to make a demo video showing what it’s capable of. DE1 is still going to be updated for bug fixes, but as far as feature updates go I’m putting them in DE2.

With the redesigned graphics pipeline of DE2, it’ll be easier to finish my Open Source Video Codec I promised who knows how long ago. I have a general idea of how I’m going to implement it, I’m just trying to work out how to integrate sound in the mix. I dug out an old audio compression algorithm I tried to make, I figure i might as well fix that up and use it. But yeah, if I hurry it up and finish the Video Codec, JME will finally have a way of playing videos and I’ll be useful for something other than racking up a huge electrical bill

Ummmm I’m also almost done with a miniature game console, bringing back the gold old days of the gameboy!!!

As far as JME games go, I’m pulling together a small dev team and starting a really big project! It’s a first person shooter called Forever Lasting, and right now I’m actually cleaning up a few things and getting used to my recent upgrade to JME 3.1, so as of now I don’t have any screen shots. But I do have some concept art! 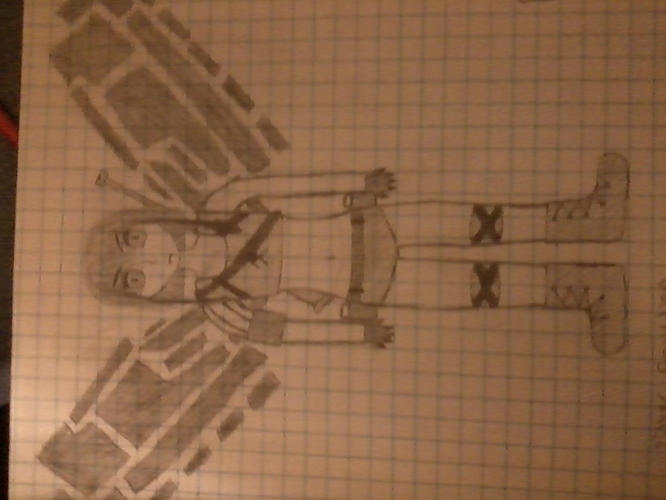 This one I drew myself 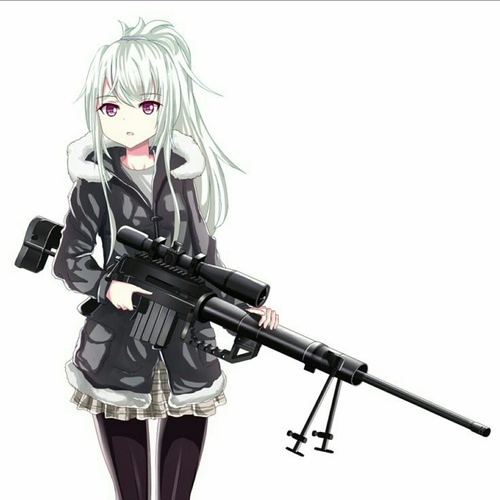 And this one I got from the internet because I was feeling lazy, but one of the main characters will look similar to this.

Anyone who would like to help out, let me know because I WOULD LOVE SOME HELP.

In Spoxel you can craft all sorts of weapons… like using a shark for a sword blade! 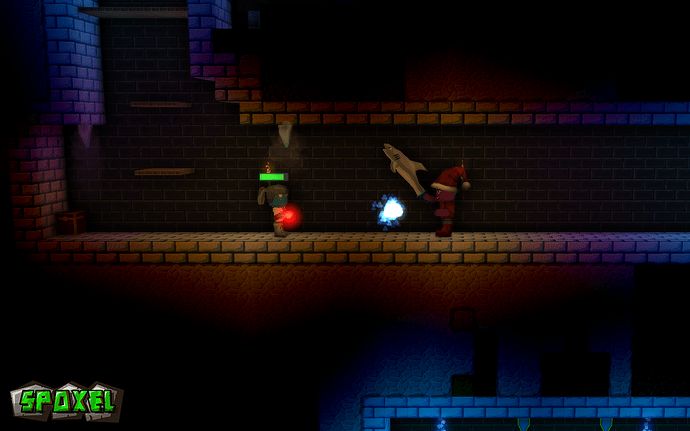 I also added a version for the smaller sword recipe in Spoxel. 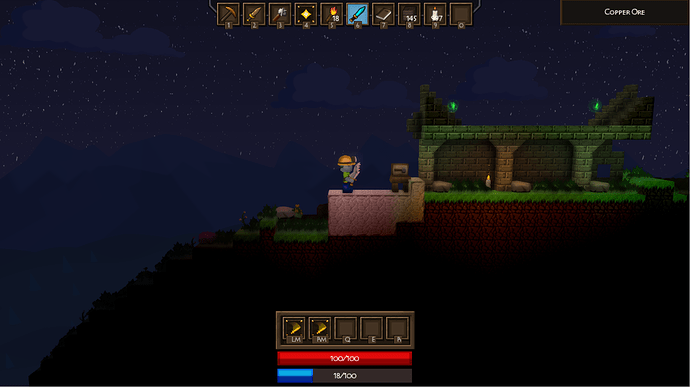 I’m working on a simple add on library that allows for taking pictures of my scenes. Most of my games are Android and I don’t get the opportunity to get good looking pictures of the scenes. So I’m making this to just add to a project and be able to add filters and lighting and adjust them.

This isn’t a scene editor. Just a small photography tool. 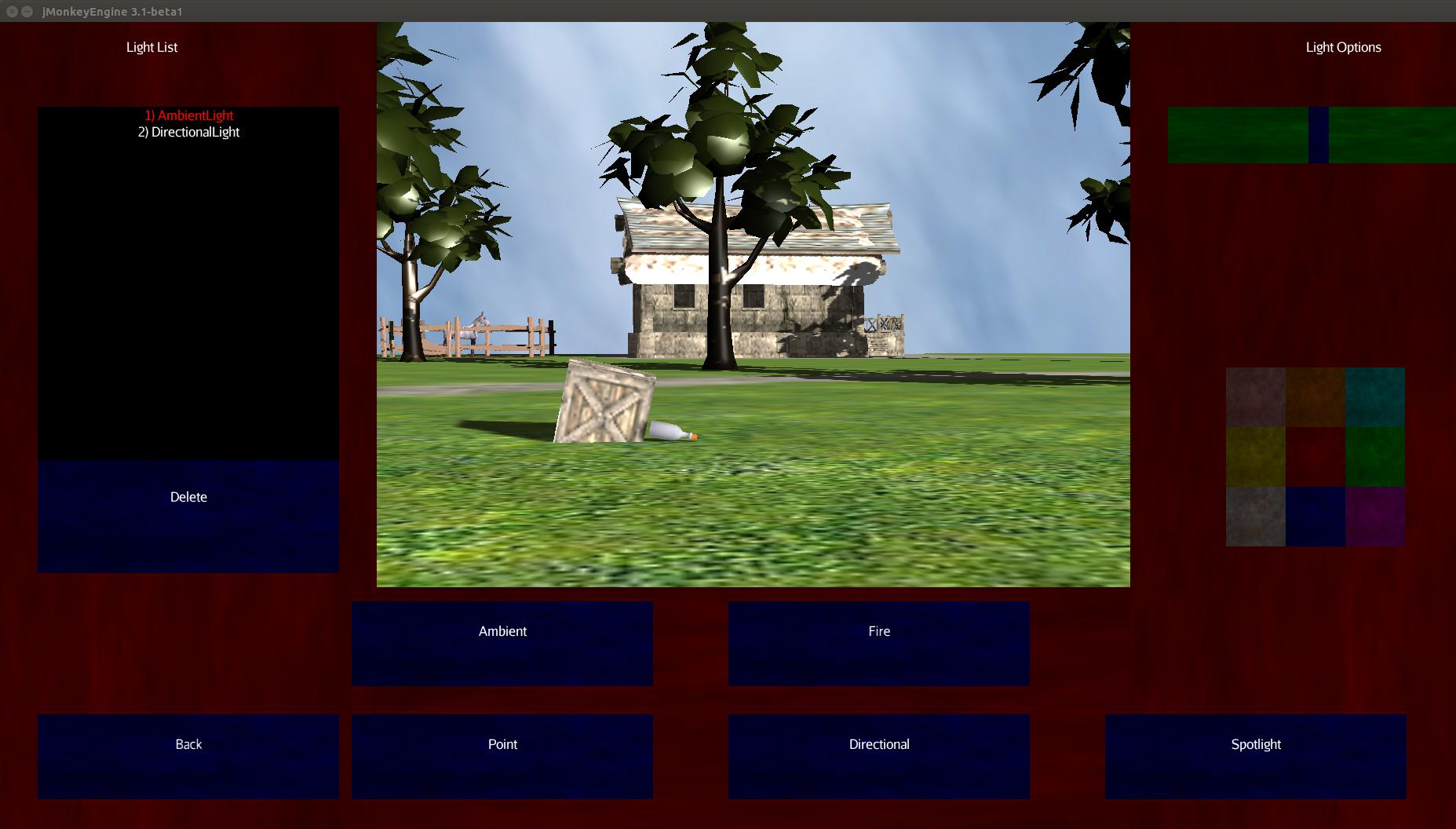 Trying to design the inventory UI (again) with a simple style. (Forget about the font style and the images in the item list) 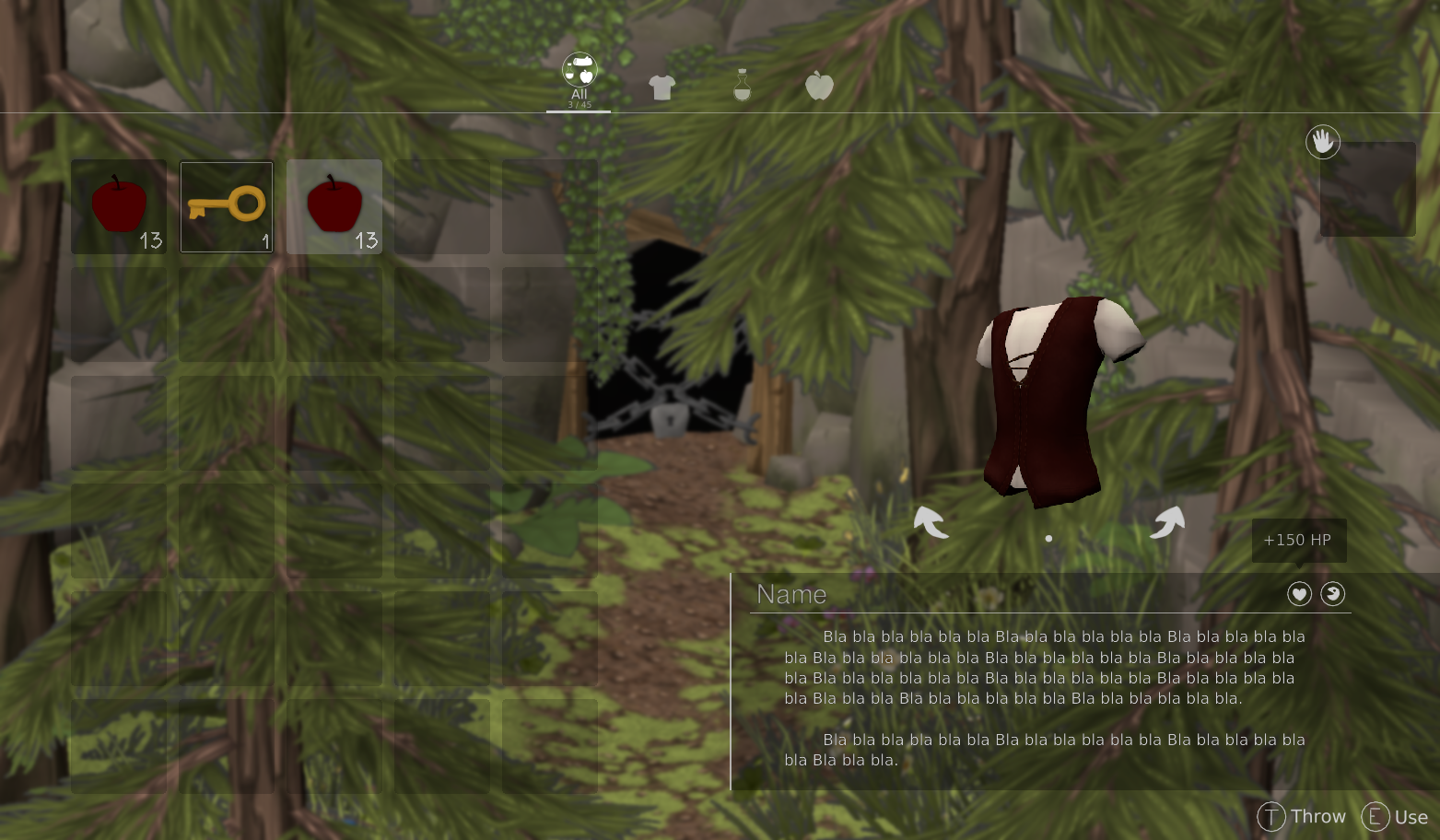 The list of the left is a scrolleable list and the model at the right is a 3D rotable view of the item selected.
At the top there is a list of the different categories of the items and at the upper right the slot for the item in hand.

What do you think? Any suggestions?

I present the project that I have been developing for two years now, and it’s about version 1.7.
It is an artillery simulator for the instruction of its advanced observers, so that they can correct the field artillery fires.
Currently this simulator is fully operational in several military units.
Even in development, the next version will be 1.8, and will bring more functionality and graphics improvements. 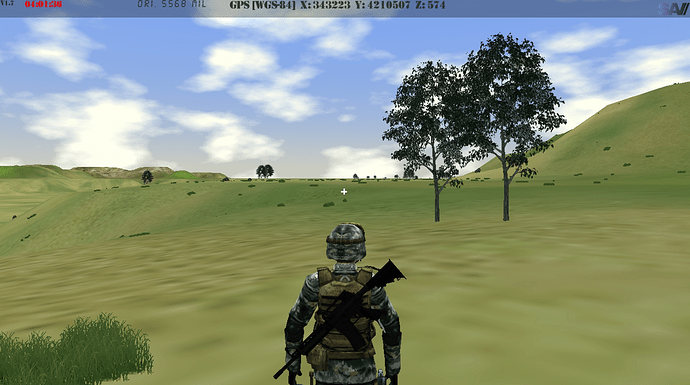 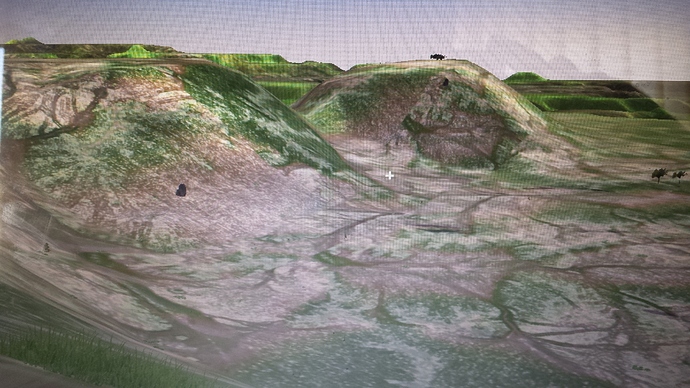 I leave a link in case you are curious to know more about this simulation system.

I had my baby son and too busy for family and day time job to play with monkeys.
Keep up good works, @thetoucher

after all the years, you still give me some light of hope even in a rainy day here in Hanoi.

Hope that I can revive my stuff someday and jME getting better and better ! Cheers,

Ripped out a quick ZayES based level editor : 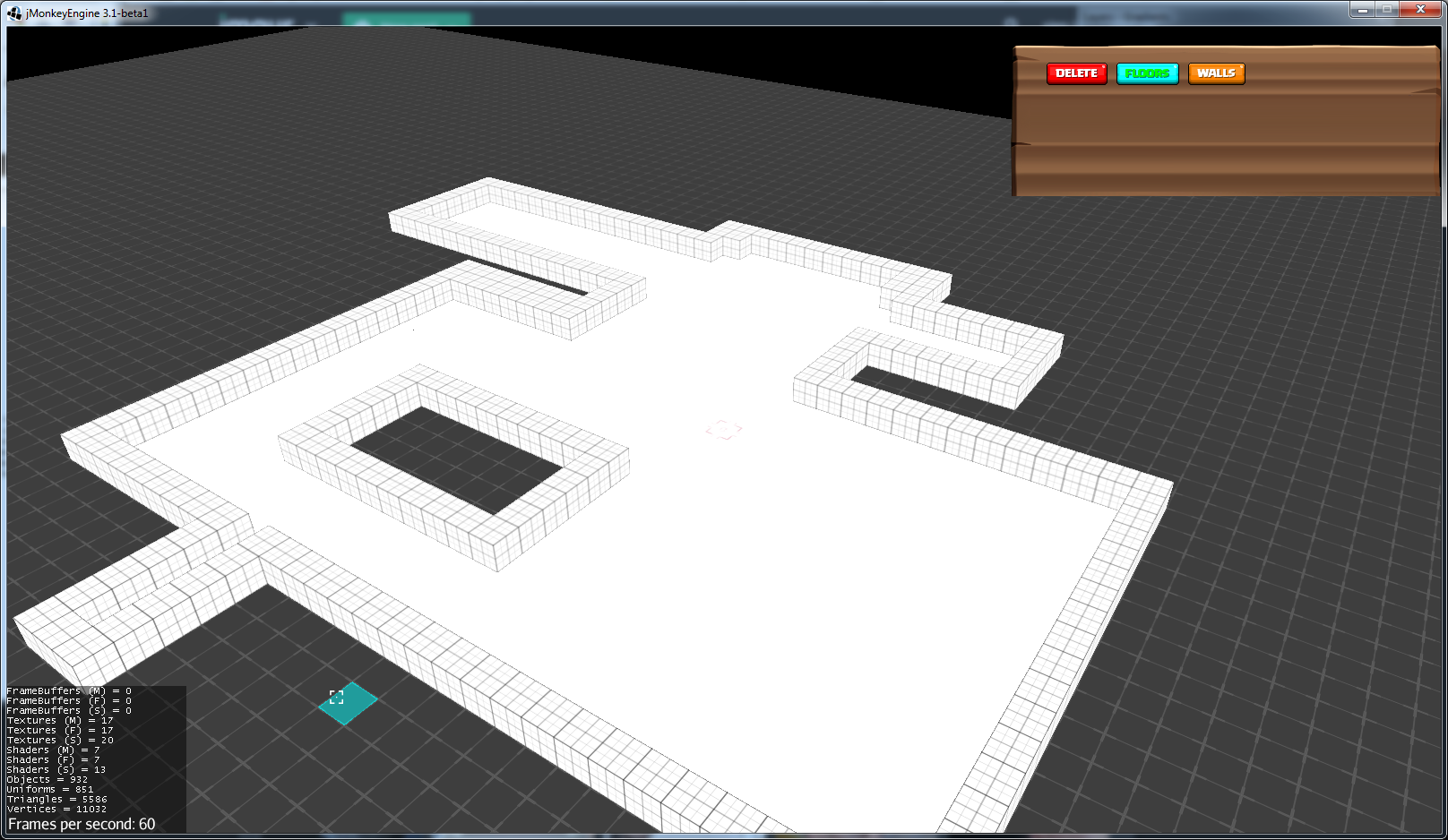 It may seem like a waste of resources, but the truth is most games need a level editor of their own. There are so many requirements a game has that makes it difficult to have a “generic” editor for all types of games. The SceneComposer is great for basic editing and placing spatials and it can be further enhanced with AppStates (which is very under-utilized atm). Once you get to actually having to ‘design’ levels, you will most likely run into limitations, or if nothing else, work-flow issues that can be remedied by a separate level editor.

Some playing with the wheels 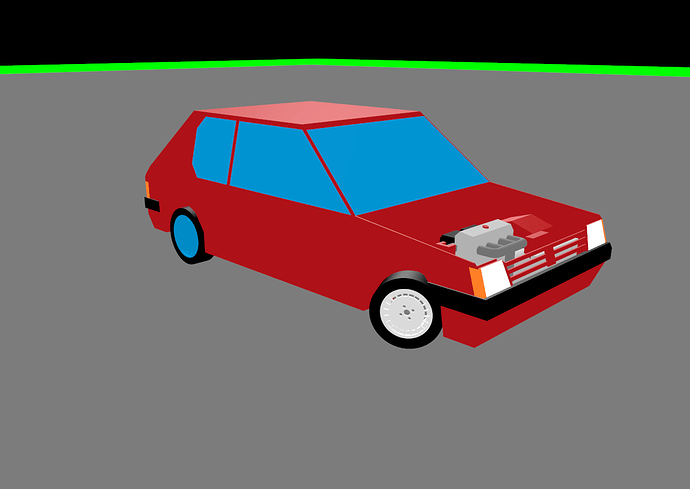 Well actually I use Blender as Level Editor currently

It is no long-term Solution and I have some ideas in my head for some DSL and descriptive maps, but currently I only use Blender.
For this I make heavy use of userData or Properties in Blender. That way I mark planes which should become water and such things.

I think that Blender is also an awesome base for this, but I have no clue how I could combine those. Maybe using xbuf to render into Blender and stuff?

I didn’t want to make a level editor, I thought it would be a waste of time and something I would yet again over engineered, spend countless hours reinventing the wheel, and only wanted to make because it sounded fun.

Initially I was using Photoshop as my level editor and png files as the save format, worked great, did the job, but was very fiddly and hard to use. So I though “I will throw one day at an editor and see where it gets me”… I would say it was well worth the risk, and if it all went tits up, I would have only lost a day.

As @rickard wisely noted, this editor is for this specific game only, it is not intended to be a generic editor. Given how quickly it all came together, in future I will not be afraid of adding a quick custom level editor to a project .

NB. This is applicable to me since I have a bit of jME experience and it was relatively quick to build for me, speaking from experience: for a lot of the newer monkeys out there, DON"T WASTE TOO MUCH TIME BUILDING TOOLS FOR YOUR GAME! otherwise before you realise it, you have a suite of tools wrapped around a broken unfinshed ‘game’. A working game with one level is infinately better than having a broken game with 100 levels

For those who just want something quick, you can get pretty far with this approach:

A 2D Level Editor in 30 Seconds

This is the gripping TRUE STORY of failed prototypes, wasted time, custom level editors… and UNEXPECTED SALVATION at the hands of the HUMBLE SPREADSHEET.