However, I do like semantic versioning which btw is a real thing with a spec and everything See http://semver.org/

What exactly is the point of this discussion? Is it still unclear what the versions mean?

No, sorry, I believe my reply has taken this a bit off topic

I guess this is why we are seeing a lot of products with the major version changing like every few months … Like Chrome is already at like 48.0 or something.

Why the name of engine is jMonkey (j is Java)?

I believe the “Monkey” is for the original author, MojoMonkey. Let’s try summoning: @mojomonk maybe?

Yes, before jME existed I used MojoMonkey as my gamer tags. Early in my career I worked for a military contractor and started studying graphics engines for rendering some things they were working on. This was all done in C++ and became complex enough that I figured that it was an engine, so jokingly called it the Monkey Engine. Fast forward a few years and I am working in Java and again need to do some graphics. I dust off the Monkey Engine and start converting it to Java, so start calling it jMonkey Engine (j for Java obviously).

Then it sort of took off from there, Joshua Slack jumped on board, NCsoft hired us to build games with it, NCsoft started having failures and cutting teams, I moved on to other pursuits and handed it off to others, then this thread was written. The end.

@mojomonk. Glad to know it. Now I can use jME knowing what thats means

@Pesegato Thanks for your summoning skills!

is this truly the prophet himself? 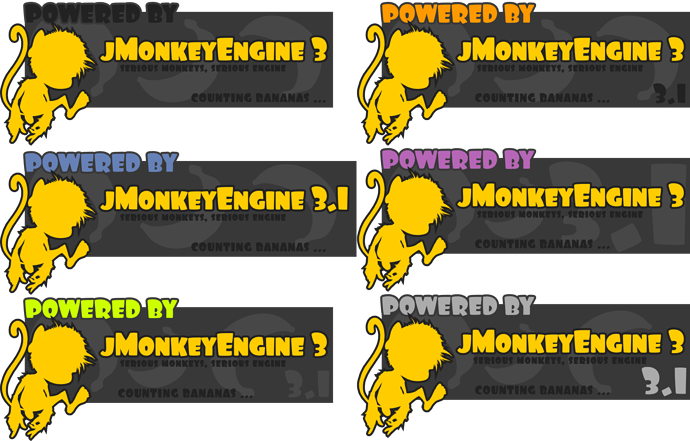 don’t forget : there is a transparent background.

I liked 3 but with 2 Powered By font color

The reason is because it’s important to show the major and minor version of SDK. User like to have newer and updated things, so if they see the logo as jMonkeyEngine 3 for months or years, they will think it’s outdated.

And the color because Powered By is an additional info, it’s not the main content on picture, but it’s important, so it needs to have a color closer to main contents color (yellow).

I can’t agree more with @afonsolage.

JmonkeyEngine 3 version 3.1 sounds good, but by watching the splash above I realize that on a splash screen is a bit confusing.
In fact, this conflicts with the statement above:

Its like with OSX where 10 is the brand, 10.2 is a new (probably not backwards compatible) release

True, but the minor version are basically overshadowed by the cat-theme branding. The 10.2 was “Jaguar” (it even had a jaguar-furred ‘X’). I’ve google for Mac OS X box, and in all the decade the minor numer has been treated as a technical information.
In short: if you want to brand 3.1 as “JMonkeyEngine 3 version 3.1” you need “Apple sized” promotional strenght, otherwise the end users will probably get confused.

Yeah, also, did anyone every notice the package name of the engine? This won’t change, no matter what “good arguments” for doing something else you bring on.

Also theres no need to think that people are stupid. When they see a release note about 3.1, 3.2 or whatever and see what features it brings and that it might not be backwards compatible they can decide for themselves what it is.

Well, if we think jME[1], jME2 and jME3 as different products, then I will agree with you.

The focus of a product logo, IMO, is to tell users/consumers what the product is and what is it for and its main features. Also, the splash screen of SDK, where it says “Counting Bananas” was genial, I’ve became a monkey just for reading it. I would like to see more “tricks” like it on logo.

Again, this decision was made long ago.

so what about this one ?

I’m going to stay out of the discussion about 3 vs. 3.1, etc, 'cause I’m too new to have on opinion, and I would probably be wrong.