2 friends and I, all students at McGill University, are attempting to recover the architecture of jMonkey.
We have produced a small document (6 pages) which is based on the information we obtained while
using jmonkey, reading documentation online and using automated tools.

We have a small request: If there is anybody who has a good overview of architecture and who’s interested
in commenting on the correctness our document, could you please read the document and give us some feedback.
It shouldn’t take long - its only 6 pages

Loks good so far from what i know, one thing I saw, jme currently has a half wip jogl renderer as well, but i could not find it mentioned in the part with abstractions over opengl api. Maybe an idea to mention in a sentence.

hey,
About the XML, HTML, C++ thing in the introduction. Those are marginal, most of the code is done in Java. The XML volume is more important maybe for the SDK, but most of it is generated by netbeans wizards.

About Gregg Patton, he may have contributed a lot in the firsts versions of JME, but seems he stopped contributing around 2005.

Also seems you kind of mixed up JME2 and JME3 architectures, which are very different.

About the remark at the end that JME wouldn’t be suitable for mmorpg because of its design…I don’t really get your point. First thousandth objects to update are not a mmo only issue. Second, we have plenty of tools to optimize complex scenes like GeometryBatchFactory, BatchNode and Texture atlases.

Maybe it’s just me but the wording in certain places (mostly read the last 2 pages) is, to me, slightly offending. Not all the time, mind you, but certain passages sounded trashy. I don’t know, maybe I’m tired.

The huge thing here is why not ask in the forum who was the best person here to answer questions you might have. Normen, Kirill and Paul would gladly have helped you. That person, Gregg Patton, I don’t think I’ve seen him post in over 2 years I’ve been here so if you got that wrong…

Also wonder why there are some many core-effects in one diagram: 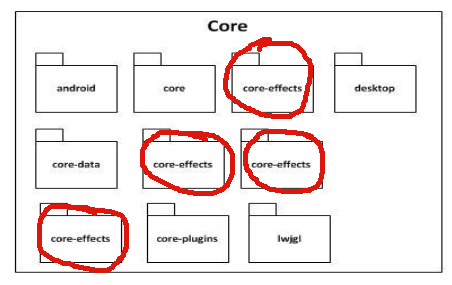 Although jMonkey has a networking module, we noticed that it contained many interfaces that had no implementation such as MessageListener.

Thank you guys so much for your valuable comments. We will take into account your feedback and make corrections to the document where appropriate. We’ll also give credit where its due - so if you don’t mind we’d like to say, probably in an acknowledgement section - that we used your feedback.