Do you know where I can find examples?

My local copy of Particle Monkey I have downloaded has an “examples” folder with all the examples so I must have got them somewhere, I could share them if anyone ever needs them and can’t find them.

It does not have a graphic editor.

Yeah this is the only big downside to Particle Monkey. It’s unfortunate because I think the author spent a lot of time working on a particle editor that was intended to work with a new JME scene editor that another dev started and didn’t manage to finish before quitting jme.

I have been able to get by using Particle Monkey without a visual editor, but I also am used to working with the stock particle system with code and not the editor too. The main thing I was looking forward to with Particle Monkey’s visual editor was the tool for editing curves, since it can be a bit of a trial/error process to tweak a curve with numbers and no visual representation, even though it is possible.

Particle monkey is based on the stock jME emitter as far as rendering goes so it should work.

On my local branch, I’ve finished reworking the particle monkey project to separate out the examples into their own project so there isn’t a weird dependency. I haven’t pushed the changes because I need to figure out the best way to publish the library these days. It’s been on the back burner, mostly due to limited time.

The particle monkey editor (4th or 5th editor/integration attempt?) works but still has a lot of needed work so I haven’t released anything. I have a somewhat working curve editor using lemur but its lacking a lot of polish. It’s taken a lot of time because it basically requires you to reimplement a scene editor. I was hoping a better scene editor would emerge from the community over the last few years that I could make use of.

Do you know where I can find examples?

A particle Emitter library for jME. Contribute to Jeddic/particlemonkey development by creating an account on GitHub.

Particle monkey is based on the stock jME emitter as far as rendering goes so it should work.

At leat it wont work with TranslucentBucketFilter as it looks for com.jme3.effect.ParticleEmitter

What do you think about adding a new utility method makeSoftParticleEmitter(Emitter emitter) inside the ParticleHelper class?

was hoping a better scene editor would emerge from the community

Can you outline a few improvements you would like the existing one to have?

Or maybe, what you would expect from a ‘better’ one?

Wanted to do a quick update. My “Crossy Roads Arcade Version”, I’ve added a day/night cycle to the game, to make it a bit harder and having something different. Cars have lights, there are street lamps with lights and also the chicken has a flash light “Yes, he has thumbs”, “Its my chicken, damn it!”

Also, I added a “FROGGER” character to the game. “Snake” on a log, the snake moves back and forth on a log and if it detects you, it will hiss at you. If it gets close to you, it will stick at you and kill you. The chicken falls over it hit. You do have time between the start of the “ATTACK” Animation and the finish to move and get out of the way. The “Death” occurs when the “ATTACK” animation is complete, so if the chicken can get out of the way before then, you make it. 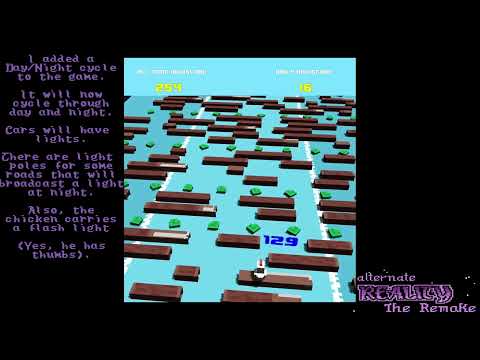