Well I’ve only spent maybe 5 days or so on this (plus a few days of in-head-planning), but here’s the checklist.

It’s starting to look a bit like the part. Still a long way to go I guess.

In its current state you can only put the following external links:

but adding published dependencies is obviously possible. I wrote a prototype before that used a custom protocol (i think it was jme://) to open links - which could be hooked up to the “auto-pull-build” local maven repository. Anyway. One step at a time. I’m writing the website at the minute. The “add-on” apps are for another day if they every come to light. 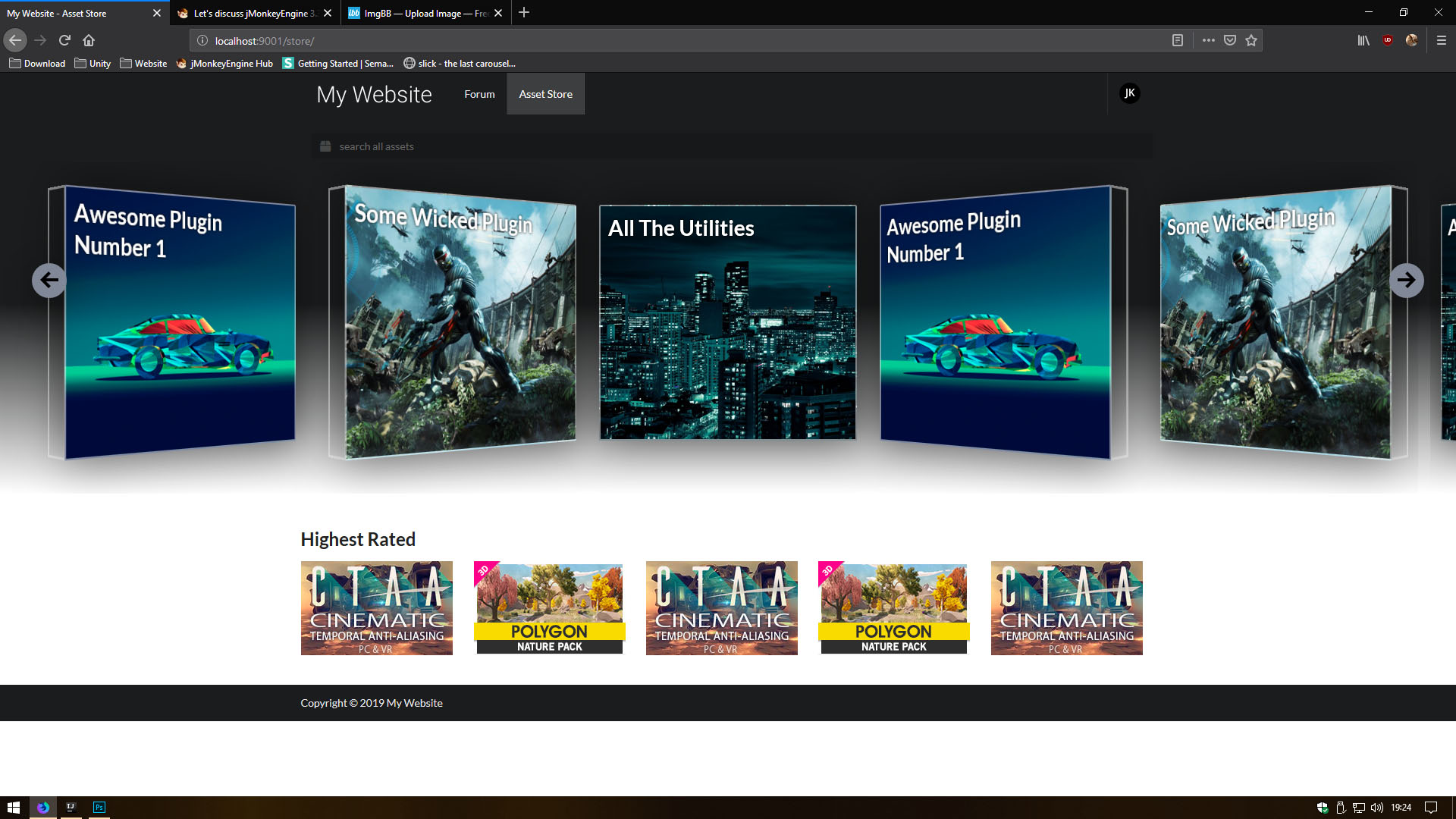 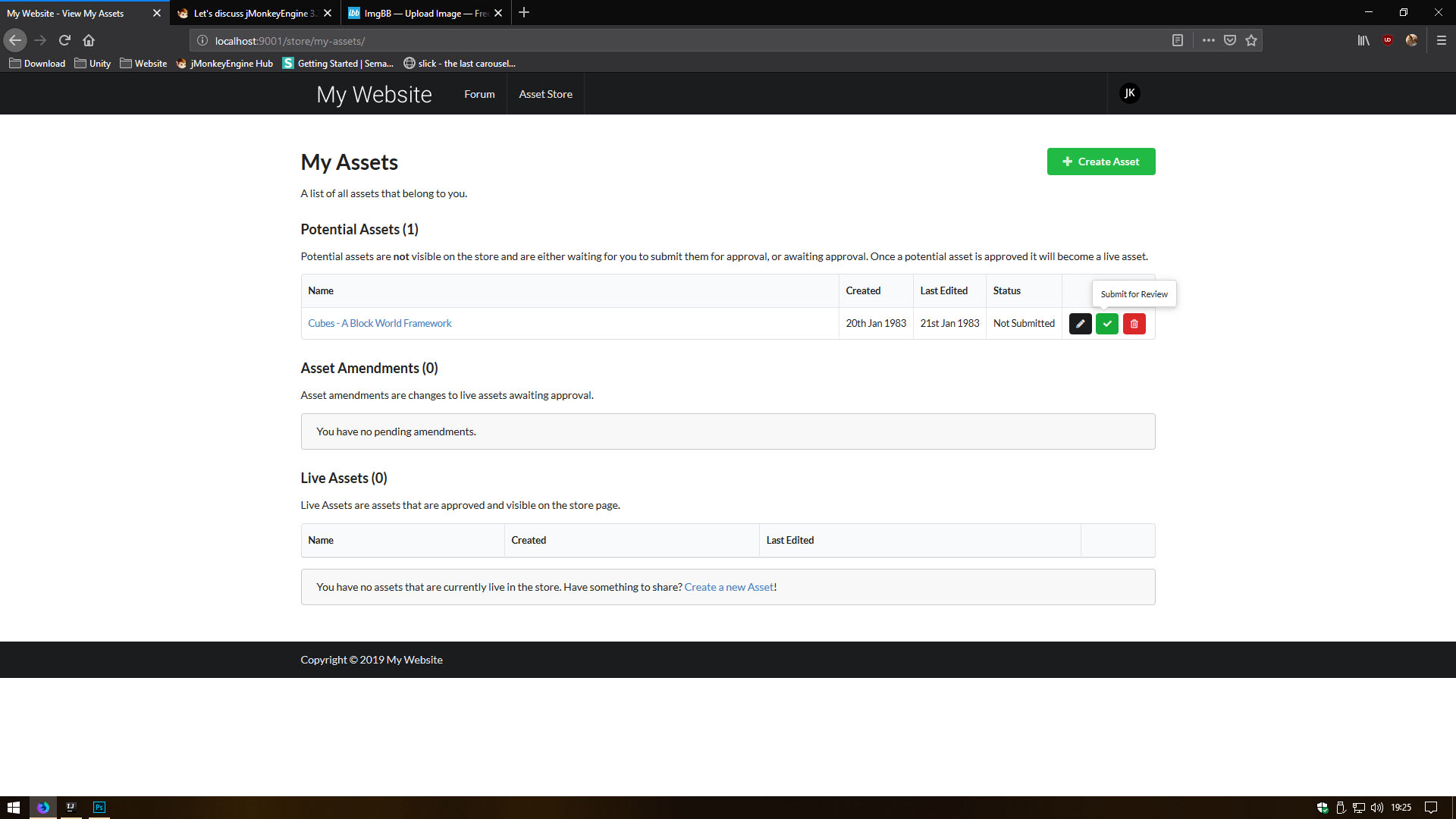 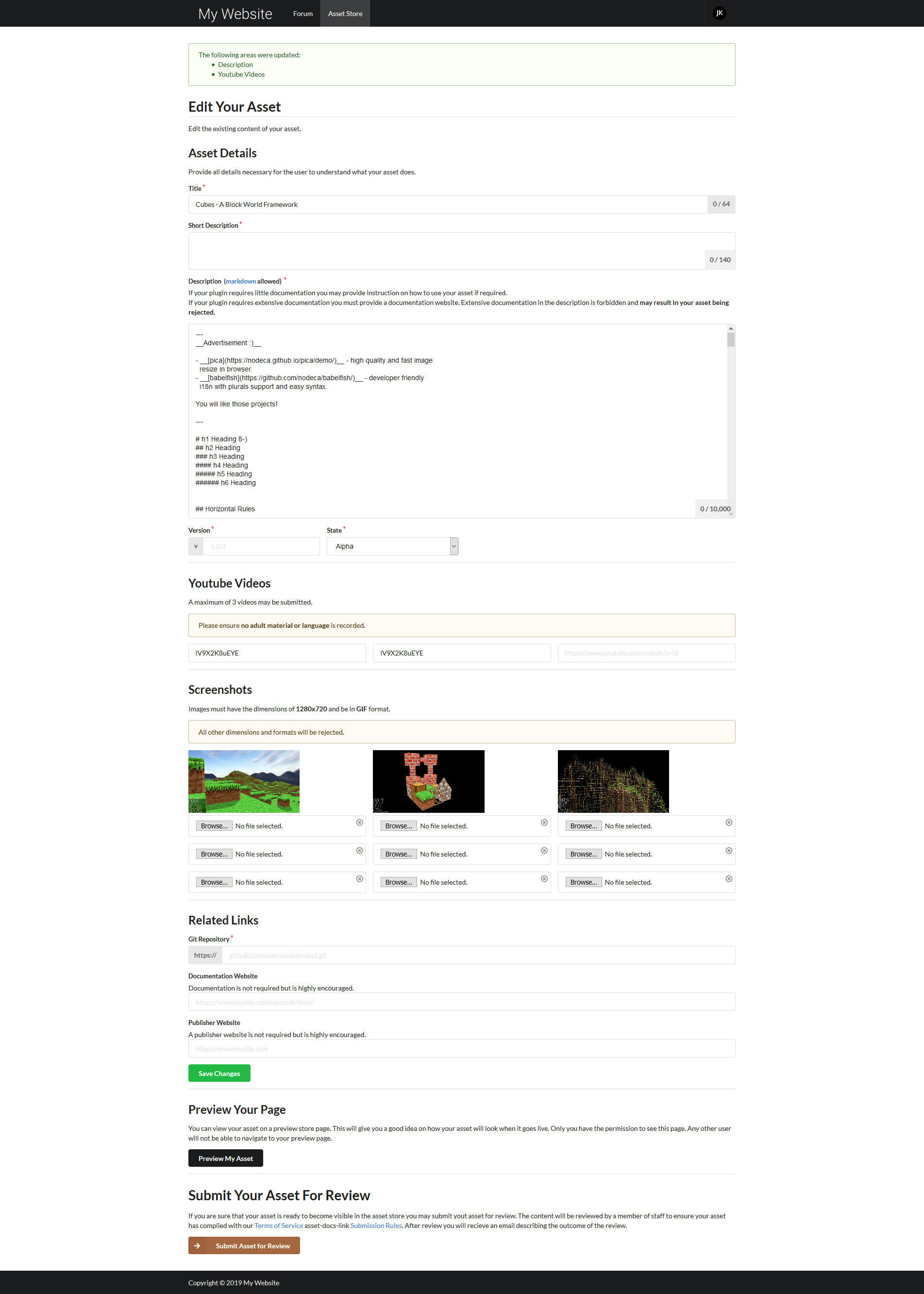 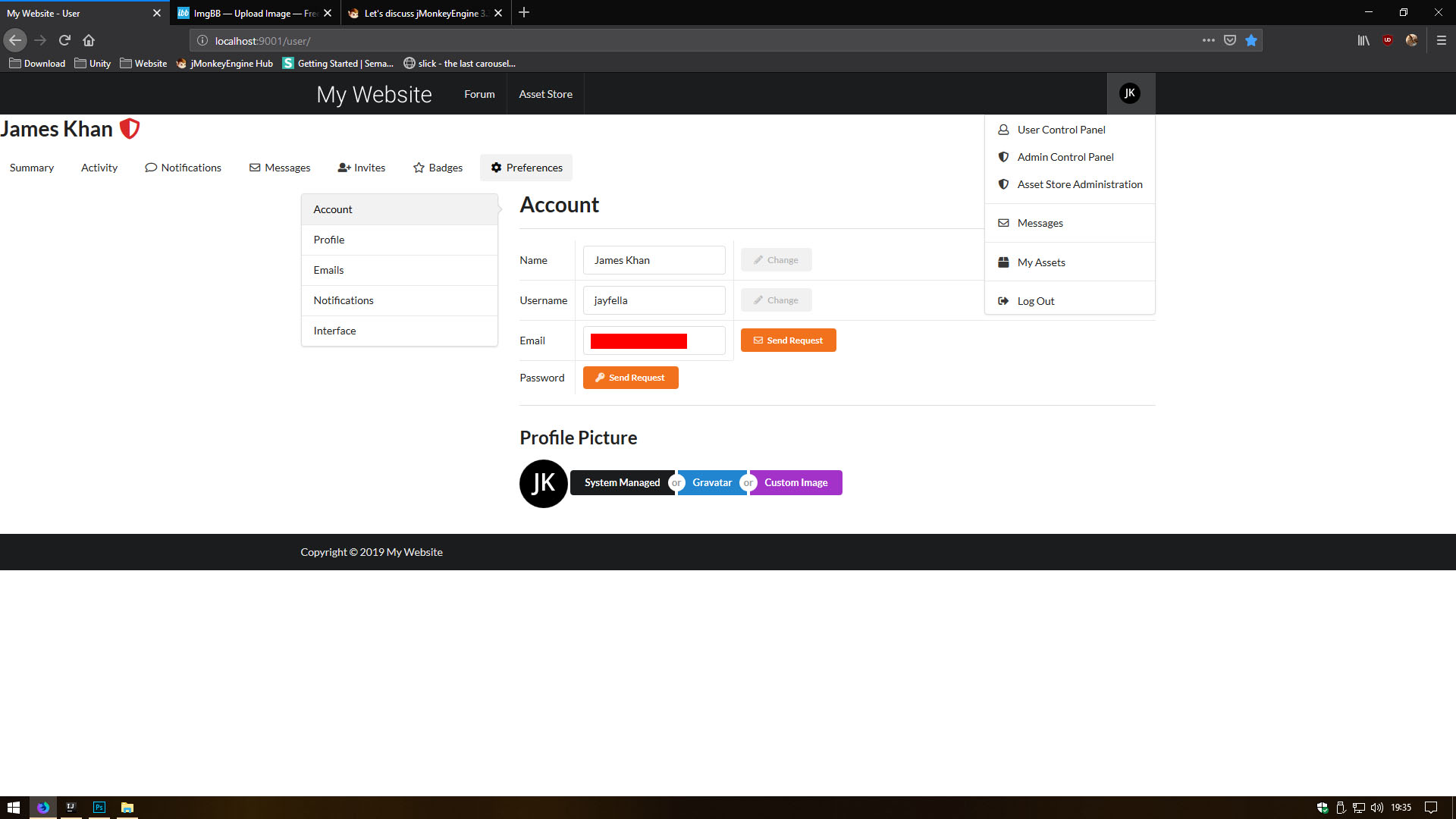 and I am too lazy to figure out how to get it on my other netbeans installs.

That could work when you just search for the jme3-darkmonkey.nbm from your sdk install and try to install it on a regular netbeans as module.

One could even imagine a Lemur or Zay-ES game template or whatever with libraries preconfigured.

The problem there would be the gradle dependencies, I could at most only copy in the jars but then trouble starts with people trying to use it: Which version do you run? SDK!

Another thing I guess is the problem that I could not find a simple “gradle template for jme”, because there is nehon’s tool which I guess had to download and execute, there is stephen’s template, which I had to edit for some reason etc.

So there wasn’t some “just download this repo as zip and extract to see the blue quad”.

That is AWESOME! (Especially for 5 days work.) What toolkit are you using for the frontend UI?

Travis gave me that “this is not a tagged commit” BS again. Hang on.

This was my simple gradle game template:

For what it’s worth.

It’s semantic-ui - first time I’ve used it and it’s pretty cool. It’s not often I get the chance to choose the artistic ingredients. I usually just put things where they go and an artist does the rest.

v3.3.0-alpha1 is deployed. When you have a moment, @pspeed, please push the button.

Identifying gaps is one of the things that will be needed.

Ragdoll physics and inverse kinematics are known gaps in the new animation system. I expect DynamicAnimControl will fill those gaps—for native Bullet, at least.

I plan to add DynamicAnimControl without adding a new branch to the repo, simply integrating it one piece at a time into jMonkeyEngine’s master. I think this can be done without breaking anything.

great idea, but you would need go depper to understand new animation system. like @Ali_RS said there are now Tweens. quote:

Action : An action is a composition of Tweens. It can be a single tween, a sequence of tweens, or tweens called in parallel way or a mix of all this. An Action is also a Tween, so it can be composed as part of another action and so on. An action can be provided with a Mask that will define a subset of targets on which it applies (a subset of Joints in an Armature or a subset of spatials for spatial animations)
Notables built in actions : (this may change a bit)
BaseAction : An action that wraps a Tween
ClipAction : an Action that plays an AnimClip
BlendAction : an Action that allows you to blend AnimClip together (think half walk / run animation varying depending on the forward speed)
That’s basically it. Note that Tweens can be basically anything, so the base action already provides virtually endless possibilities:
Stock Tweens that I plan to provide:

Stock Tweens available in Lemur (will probably be ported to jme’s core):

so i think DynamicAnimControl would need some integration to have both working properly. i belive there will be a lot conflicts. im not sure if you already analyzed this code or not, but looks like much more different system.

The 1st 2 pieces don’t involve animation, merely porting over Minie’s EmptyShape and MultiSphere collision shapes. After that, the integration will get more complicated. It seems prudent to plan ahead.

How does the new system communicate Joint transforms from the AnimComposer to the SkinningControl?

Another problem is: I guess for now only GLTF uses the new animation system after import. Consistency has to be built there, but fortunately there seems to be a utility class which converts the old system structure to the new one.

Answering my own question: just as every SkeletonControl has a Skeleton, every SkinningControl has an Armature. DynamicAnimControl should have no difficulty reading and modifying the Joint transforms in the Armature before any skinning matrices are computed.

Tweening and blending seem to happen entirely in the AnimComposer, where they’re invisible to DynamicAnimControl.

So good news: the class names have all changed, but as far as DynamicAnimControl cares, the new animation system isn’t much different from the old one.

In case anyone is confused about my role here:

So is there a lead developer or release manager / project overlord? I’ve always wondered.

Someone usually takes it upon themselves… which used to be easier when there were a lot of core devs.

Looks like I will be the stuckee this time.

Some notable changes since alpha1 (as I remember):

I also wonder who are the main contributors who can review/merge such PR. It also contains the change that VertexBuffer now extends BufferObject, which I briefly discussed with @pspeed, thus I can hardly imagine someone else reviewing the code. This can be separately viewed at (refactor base class buffer object · TehLeo/jmonkeyengine@0037e13 · GitHub) .

I know reviewing PRs can take considerate amount of time. I do not expect anything soon.

But even thou the PR is a bit bigger, with 50 hours spent on developing it I can say it was written carefully.

Anyone can review a pull request, but only the Owners and Members (of the jMonkeyEngine’s GitHub organization) can merge a PR. There are 32 of us: People · jMonkeyEngine · GitHub but most of those are inactive.

Reviewing PRs is the bottleneck. Due to human nature, shared responsibilities tend to suffer neglect. Sometimes it helps to ask a specific person. Sometimes I merge my own PRs without any outside review.