Position ahead in an arc

I have a question.
I have a camera and a direction.

I get the direction the player is facing and find a random position in the distance and I want to draw something there. But I don’t want it to be in front of the player all the time.

This is a mess but hope it helps.
Step one get player position and direction.
Calculate a new position distance from player.

This is a grid base game so the direction is verify simple, but I know you guys know how to do this in a generic form where it doesn’t matter. 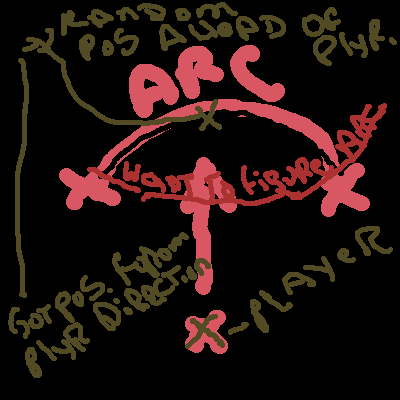 From my understanding, you are trying to get a point between a reference point and another target and then rotate that point around the reference point in a 45 degree range and then retrieve the current position ?

Yes. I want to create a random function for rotating with in 45 degrees of the point 24 degrees to each direction.

I assume sin/cos on the x,z will do it, but I’m not a match guy didn’t want to waste time trying that if that is not correct.

You can simply do the following :

in which you will convert an angle to a coordinate, i have made something similar before on 2d stuff but i don’t have the enough knowledge to reproduce that on 3d stuff.

I assume sin/cos on the x,z will do it, but I’m not a match guy didn’t want to waste time trying that if that is not correct.

It will work, if you draw the right angle for the right vector component, as i recall, the angle is represented between the (Vx, Vy, Vz) spatial components with the norm (x, y, z) of the rootNode, you may want to eliminate y or z to keep it simple.

If you just want to pick a random point x distance away between +/- 24 degrees… then I’d just use Quaternion.fromAngles and then multiply that rotation by new Vector3f(0, 0, distance)

…add that to your current location and Bob’s your uncle.