[SOLVED] Camera Node and Spot Light and Mouse Cursor - How?

Are You native english speaker? Sry but I didn’t understand half of what You wrote… Could You please give complete example of what goes where?

Also for the B point…

Are you a Java coder? If you were you’d have understood what he said. Learning Java while learning how to write a game is an almost impossible task and will only lead to frustration.

Not as long as there are people willing to help with that. Code snippets here code snippets there and it works… That’s how I learn! Now can You please help me finish those last things?

That was subtle… And nice…

Could You please at least follow up on the B point and help me fix this light so it moves exactly as mouse cursor does? Not slower, not faster just identical as if my mouse cursor and flashlight were one entity…

While I take my sweet time to google around to found a way to pass this goddamn cam to my appstate…
[EDIT] Did it like this… Is it proper way to do stuff (I mean it works but dunno if it’s best solution)? I believe cam itself belongs to another (default) appstate so no idea how to reach those directly.

Anyway I can’t deal with B point alone

I still not sure on what you need.
Take a look on my old thread :

You may find some answers.

I said what you could do to keep the light direction at z. Changing the direction of the light doesn’t change its speed so you obviously did something wrong.

Probably I did but sure as hell I have no idea what. This is whole code relating to my mouse and light. Just uncomment “dir” parts and comment “UNIT_Z” part to see difference.

And (probably a wild guess) I maybe learning java but I’m pretty good at math and I have an idea why things don’t work as expected (sadly don’t have the solution). Image below, please study it cause it’s the best way I can elaborate on the problem. 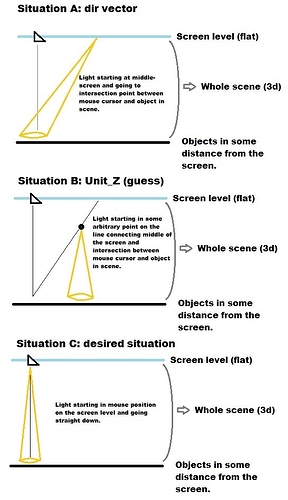 “Screen level” (or rather the normal of that) is the camera direction so the code you have in your previous post should be fine.

I needed several edits to make image work. You responded too fast

Check image please - it shows the effect of different solutions. Situation B is potential explanation of the speed issue (not the solution though).

No, image 3 is what you get when you do

Situation B might be what you get when your screen isn’t looking in z direction any you use UNIT_Z. I only gave that solution because you asked for it. Play around a bit, you have all information, now its time to do your homework.

The thing with DIR is situation A and I can prove it. In my code I can move a camera in drag’n’drop fashion (in only one plane - no rotation so the distance from camera to the plane is constant). When I do so mouse stays in “grab” place (above some object for example) while I move my camera around.

If it were situation C my light shouldn’t change at all because mouse didn’t change position relative to the object that is lighted. But it does. It acts exactly as if the light were cast from the middle of my window (meaning: the light gets “bigger” when the distance from the middle of my window becomes larger - and it shouldn’t if it were cast from the mouse cursor).

The reason things moves so “slow” on my plane of objects is the effect of the perspective (field of view). So to calculate point to which I should REALLY move spotlight castpoint (even though it would make an illusion of being on cursor) I need to first calculate mouse collision point, and then move my spotlight to the point above this one (in Z dimension).

The only question left is: how can I get collision point between ray and some arbitrary plane (for example Z = 5 plane) and not with an object?

[EDIT] Enough dying for today. I hope someone will tell me a way to find ray collision point with either plane I created or some arbitrary plane in general.

How to find intersection point

Assuming no obstacle geometries are there between ray origin and the plane:

Then using your perspective-whatever-correction you can easily get your point in scene coordinates.

I thought you were good at math…? Just look at the javadoc of Plane.

Plane isn’t even necessary. It can all be done with simple vector math given the camera location, the direction vector, and the click location… all in 3D space.

But I’m not clear on whether or not it’s some fixed distance that the light should shine on or only intersected objects or something. Because for trying to remove the ‘perspective’ part of the light it matters.

Let’s say for the sake of argument that it’s desirable for the spotlight to shine parallel to the camera direction as if it’s shining on a plane 100 meters away.

Note: physically, this is like holding a spot light way out of view.

But sure, all that Plane does can be done with Vectors alone.