Anyone can teach me what are a CAM’s : Left Up Direction vectors ?
Are these three vectors must be orthogonal ?
If i used cam.getUp cam.getLeft cam.getDirecton , did i get a normalized vector?

The left and up vectors are used to orient the camera’s local coordinate space. If something is expressed in screen space coordinates, they determine how it appears relative to the view. In jME, left is -X and up is +Y.

I’m not sure if jME keeps these normalized or not. In general, if your calculations require normalized vectors I’d suggest always normalizing a vector before you use it for two reasons: (a) it’s more robust - if someone comes along and changes a normalized vector in the engine to an unnormalized vector (on purpose or via a bug), your code remains unaffected, and (b) it makes your intent in your code clear - you have permanently indicated in your code that your calculation requires vectors to be normalized, and if you or other developers go back and visit that section again they will immediately see that you thought the vectors should be normalized, which can go a long way towards clearing up confusion if someone isn’t sure what a calculation should be doing.

Camera direction vectors will be normalized unless you change them yourself.

The represent the coordinate axes of the camera… which google will have a TON of articles on if you are interested in more information than that.

Aside: a 3x3 orientation matrix is essentially the three orthogonal coordinate axes.

Thank you guys
I’ll work on with your advice~

This picture will give you a visual representation of what you need to know about a 3D Rendering Camera and its vectors. 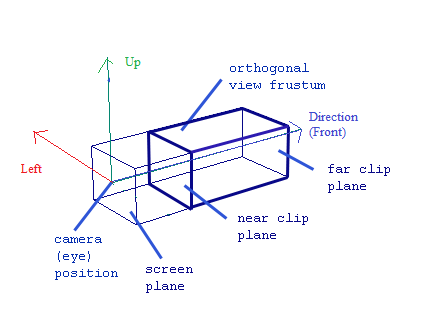 Also read this tutorial from the wiki:
https://jmonkeyengine.github.io/wiki/jme3/advanced/camera.html

Note that that picture is of an orthogonal camera, not a perspective camera.

What if I input Up-Left-Direction vectors that they are not orthogonal ?

Yes, those are orthogonal.

But in a perspective camera, the frustum sides are not parallel to any axis vector.

You’re right in that by the usual dot-product-is-zero metric, those vectors are not orthogonal. However… they are orthogonal in a sense because they are in separate spaces. The direction vector is in world space, but the up and left vectors are in camera space (in fact, they define the orientation of camera space - a left vector of (-1, 0, 0) means that moving one unit in the -X direction moves left across the camera’s view). Here’s the gotcha… since the direction vector determines where the camera is looking in the world, it must be orthogonal to the camera’s viewing plane. If you transformed it into camera space, it would lie along the camera’s forward axis and thus, when dotted with the up and left vectors, would have a dot product of zero (truly orthogonal in the mathematical sense). Vector spaces are a bit hard to wrap your head around at first, but once you get used to using this stuff it will become second nature quickly.

Ignore me. I completely misread the question.

If you give the camera non-orthogonal vectors then you create a strange world transform and will get odd results.

In JME, the Camera.setUp(), setLeft(), setDirection() are all in world space and should all be orthogonal to each other.

Edit: actually, JME is wise and doesn’t let you set these at all. They are byproduct of the proper transform methods already on Camera.

Ignore me too… I assumed the up and left vectors were in camera space, but from @pspeed’s answer this is not the case in jME.