for my game I want to rotate the players head so that the head always faces the view direction. For that I wrote a HeadRotatingControl which extends AbstractControl and is added to the player model. This control rotates the head bone of the player to the according viewDirection (which is a Vector3f) . Another system sets the current viewDirection for that player.

I use an EntitySystem (Zay-Es) for my game. There is a component which stores the current viewDirection for a player. When it is changed another system (app state) sets this new viewDirection for the corresponding HeadRotatingControl.

For Singleplayer this works fine because the updates are made immediately.

Heres the problem: In Multiplayer updates are sent only 10 times a second which doesn’t really lead to fluent movements of the head bone BUT the head rotation was still correct.

Due to the fact that I wanted fluent movements for the head I decided to interpolate (slerp) between the view direction updates. But “slerping” between the updates causes very weird artifacts… The head starts to “jump” away from his body…

For better understanding I made a short video: First you see the Singleplayer mode which works fine and after that you see two connected clients where you can see the issue I described above. (Sorry for laggy video) 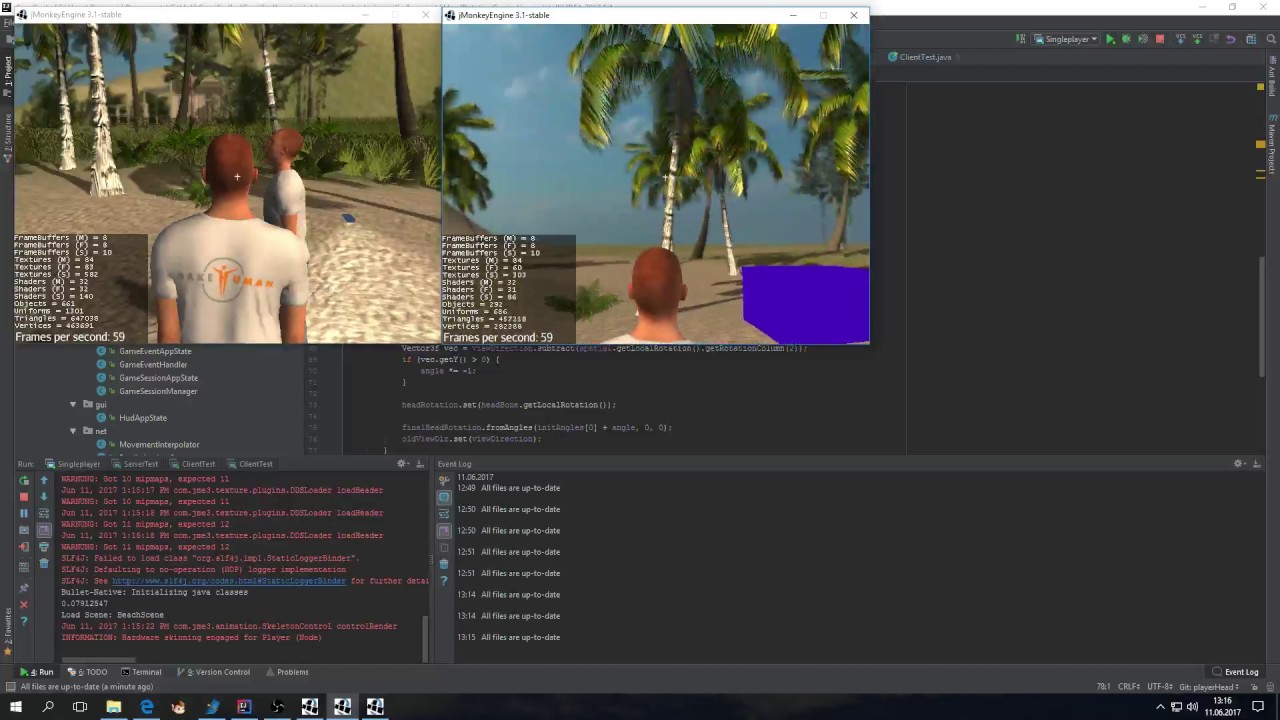 Here is the code of the HeadRotatingControl class

Again: For Singleplayer this works, even with interpolation. But on Multiplayer it doesn’t anymore.

I really hope somebody can help me.

The direction of the vector will be redundant information. Because you just use the rotation of the bone of the head. Use rotation for bone, it will be easier.

Use rotation for bone, it will be easier.

Isn’t that what I am doing? (see headRotation and finalHeadRotation)

But then why is this … if (!oldViewDir.equals(viewDirection))
It is easier to follow the axis of the bone.
Because the view can change horizontally.

But then why is this … if (!oldViewDir.equals(viewDirection))

This is just to set the new final head rotation because the view direction has changed.

It is easier to follow the axis of the bone.

Sorry, but what do you mean by that?

At you the bone on logic rotates only on one axis. Why watch out for everything?

At you the bone on logic rotates only on one axis. Why watch out for everything?

I solved the “jumping” of the head. There was just one line of code missing…

I need to call this after I slerped the rotation and before I apply the user transform.

I’m doing something similar to your work. However, I will do it differently.

I’m doing something similar to your work. However, I will do it differently

It would be cool then to see how you did it.

For things like camera or head rotation, it’s almost always better just to keep yaw and pitch and then derive rotation from that.

…and in math like this, any time you are asking for “angle between” and it’s not to display it to the user then there was a much better way. I started to tease it out but there was too much stuff to understand that completely goes away if you just keep yaw and pitch and derive rotation from them.

Yes, this probably would be better. But if I change my EntityComponent just for this a lot of other code would “break”.

Yes, this probably would be better. But if I change my EntityComponent just for this a lot of other code would “break”.

Well, if this is a component for head rotation then I would say that other code may already be “broken” and just not realize it yet. Hard to say.

@nehon
That’s what solved this issue (posted it above)

@pspeed
No, the head does not have its own component. The viewDirection is in a component which is handled by a physics state to compute new physics locations for players. I just use this viewDirection in another state to make this head rotation. So this is just something visual and doesn’t affect the game logic.

EDIT:
@pspeed is this wrong?

@pspeed is this wrong?

It’s just weird to use “angle between” for anything other than a display to the user.

I mean this code:

// get angle between character rotation and view direction
angle = spatial.getLocalRotation().getRotationColumn(2).normalize().angleBetween(viewDirection);

Makes a lot of assumptions that may not hold. If there is ever any roll involved then this up down check gets really bonkers.

It’s probably better just to transform viewDirection into local model space and then things start to make more sense. I think then you can get away with lookAt() to find your target rotation of the head.

Okay, thank you very much for making all this clear! I’ll try to do it like you described tomorrow or so. This actually sounds much better!

Hello @pspeed , it also works like you described but I didn’t transform viewDirection into model space for that (that seems to make things unnecessarily complicated)

This is how I do it now:

But I really would appreciate a little feedback if possible. ( I am always willing to learn

Not it easier to track the rotation of the bone?

After all, your head rotates up and down.

Why react to a horizontal change …

Not it easier to track the rotation of the bone?

After all, your head rotates up and down.

Why react to a horizontal change …

Well, I could check if the y-value has changed but that would feel “dirty” again.

How would I do it then? Could show me some code because currently I don’t know how to check that in a clean way when I just have a vector3f as viewDirection.