I want to deploy a self-contained game (with JRE bundled inside). On the master I see these two screens: 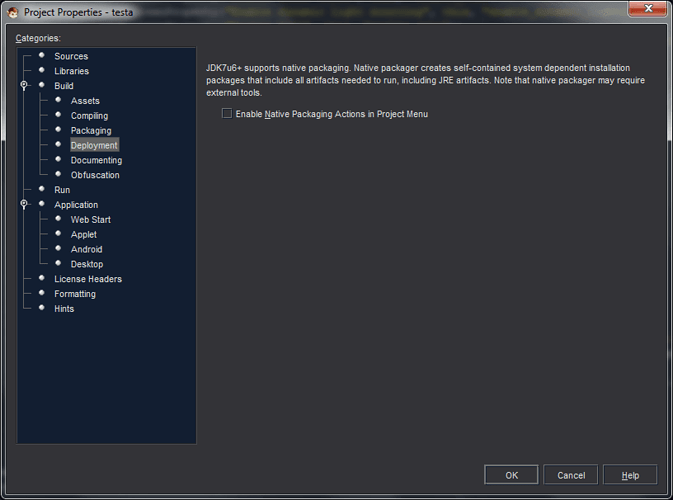 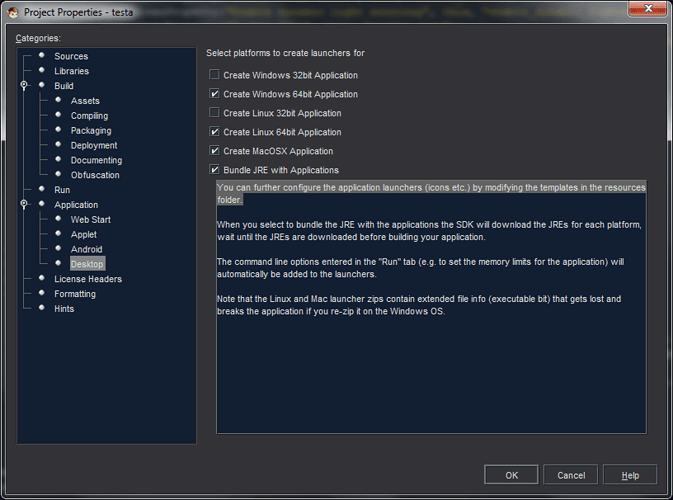 What is the difference between the two? Isn’t the first one redundant?

One controls including a JRE bundle… the other controls building the actual app bundle just like JME has always had.

Edit: I missed the checkbox at the bottom. I have no idea what the difference is.

Hey, I’ve been working on a new way to do desktop deployment in the SDK. https://github.com/jMonkeyEngine/jmonkeyengine/commit/89249e18547cf0bb6bd65496a7ad4b8de14004e5 The 3.1 release will allow you to create Windows .exe, MacOSX .app and Linux binary launchers for your applications and you will now also be able to bundle a JRE with your application so your users won’t have to install Java anymore. This is already somewhat possible in 3.0 stable by providing the JREs manually and configuring …

Suggestion: I would change the

You can further configure the application launchers (icons etc.) by modifying the templates in the resources folder.

You can further configure the application launchers (icons etc.) by modifying the templates in the
< your project >/resources folder. Hint: google for ‘ReplaceVistaIcon.exe’

Yes the first is from NetBeans and only works for the platform you’re running on.

Tried but when trying to run the bundle got this error on non-development pc.

It says “MSVCP100.dll isn’t present on the computer. Please reinstall the program”

Yeah, thats an issue with Oracles binary stub though. The problem is what the message says.

I appreciate the advices and I realize that 3.1 is unstable; however I guess that this means that I will be better off by NOT bundling a JRE and tell my users to download a JRE themselves… until Oracle fixes this.

Or you go ugly, just also add the dll to the executable folder XD

I guess most people actually have this dll when they have a few games installed but yeah, as you think.

I’ve just upgraded to 3.1, and I gave the Windows 64-bit distributable to someone else to play. They ran into this same MSVCP100.dll issue. We fixed it by me giving him the MSVCP100.dll and MSVCR100.dll files from my own System32 folder, and him placing those alongside the executable. So, it seems that including these DLLs in the distributable certainly does work.

So, what I’m wondering is:

This is an old thread, I’m now using javafx-gradle-plugin that builds a self contained archive that actually works.

To clarify a few things:
These DLLs are part of the Microsoft Visual C(++) Runtime Redistributable.
As such they are to C/C++ what the Java Class Library is to Java. They provide the implementations of fopen/printf and many more. That means, that nearly every C/C++ program should already need them to work and as such it might be already available on your system.

Somebody simply needs to update the executable stubs in the SDK, its the same ones as the JavaFX packager creates.

So, @Darkchaos, in point 3, are you saying that Steam installs (and re-installs) the Microsoft Visual C++ Runtime Redistributable with each game that it installs? I see now that I have a multitude of Microsoft Visual C++ Redistributables installed on my PC, from versions 2005 to 2015, x86 and x64, and various different versions of each. Perhaps these were all installed by Steam over the years, when I’ve downloaded and upgraded various games from it?

So, seeing as 3.1 specifically requires the 2010 version of the Redistributable, will Steam know to install that one if it’s not already installed? I’d imagine you’d just specify something on Steam when you’re preparing your game for download?

If what I’ve said is correct, then for those of us planning on distributing our games via Steam, this DLL problem sounds like it’s not an issue. Is that right?

Regarding the batch file approach, that’s basically a way to avoid having an executable, thereby avoiding this whole issue. I see what you’re saying. I’ll bear it in mind as a plan B.

Regarding what you’re saying, @normen, how do the JavaFX packager’s stubs fix the problem? Do they not need Visual C++? Or do they use a later version of Visual C++, that’s more likely to be present?

To test what you’re saying, I created a JavaFX project, then I created an EXE from it (for which I needed to first install something called Inno Setup 5). Running the resulting EXE installed the JavaFX application on my PC. Then, in the folder it installed that to, I saw there was an EXE roughly the same size as the stub.exe files that 3.1 uses. Would these be the stubs you are talking about?

I did try copying the EXE, and running my game with it (both the 32 and the 64-bit versions), but it didn’t work. It just says “JavaFXApplication8.exe has stopped working.” Would you have expected that to work, or is what you’re saying slightly more (or less) complicated than that?