Cool stuff, but are you New Zealand or what? It isn’t April yet…

He’s Australian… and one of the worst…

Though I must admit that this video is pure awesomeness…

If it’s April for him, that means… APRIL FOOLS

Well, I guess I’ll stick our update (or new, since I haven’t done this before) post here, even though it’s March for me. I live for the future.

Nothing too fancy, I’m working on a circle shader that will allow you to draw circles on quads using just the shader, no texture, so the circles are fully scaleable and modifiable at runtime. 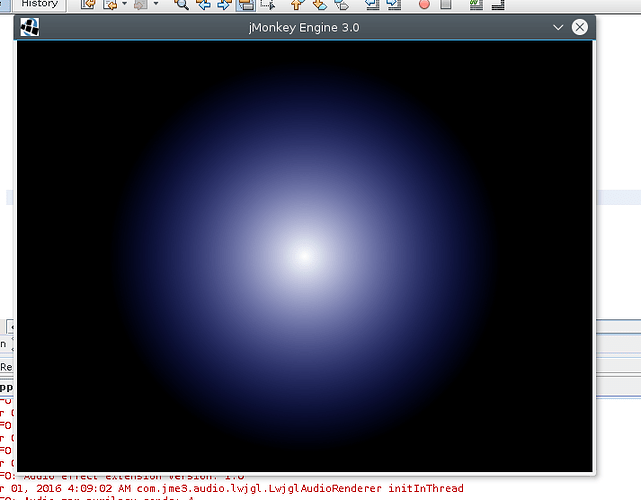 There’s an offset setting which allows you to modify how much of the circle is encompassed by the center color. 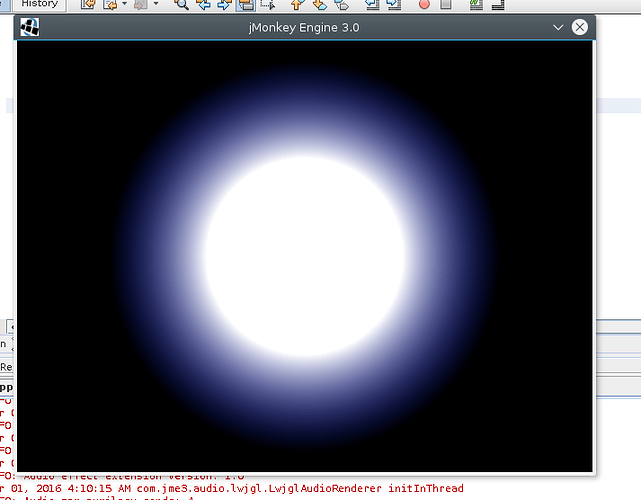 If the secondary color is opaque or the offset is set to 1.0 the shader anti-aliases the circle. Anti-aliasing is only available on GLSL1.2+ devices, a fallback shader is used that doesn’t anti-alias if GLSL1.2 is not supported. 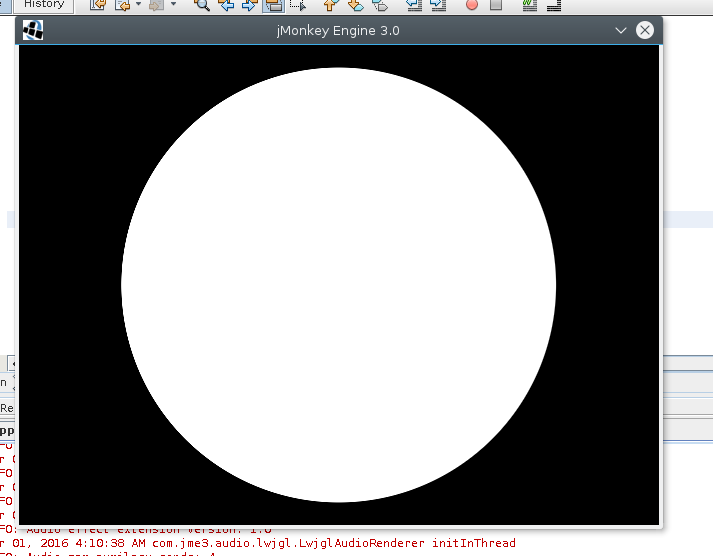 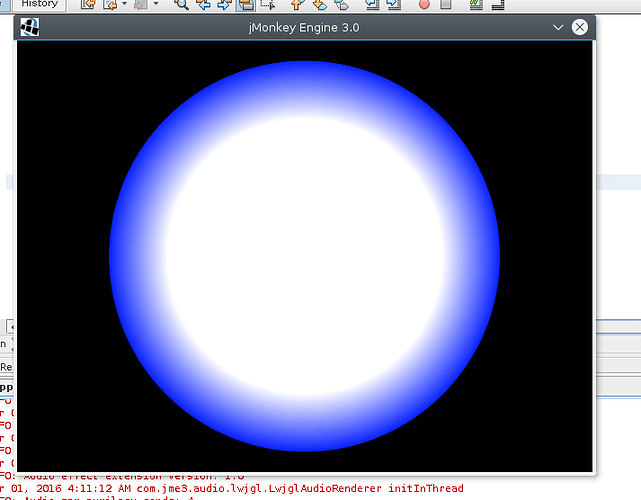 In order to ensure enough space is available for anti-aliasing the circle does not fill the entire quad, in this case just a standard jME Quad mesh, but instead takes up 90% of the available space on the quad. The 10% padding is overkill for large quads, but is necessary for small quads. 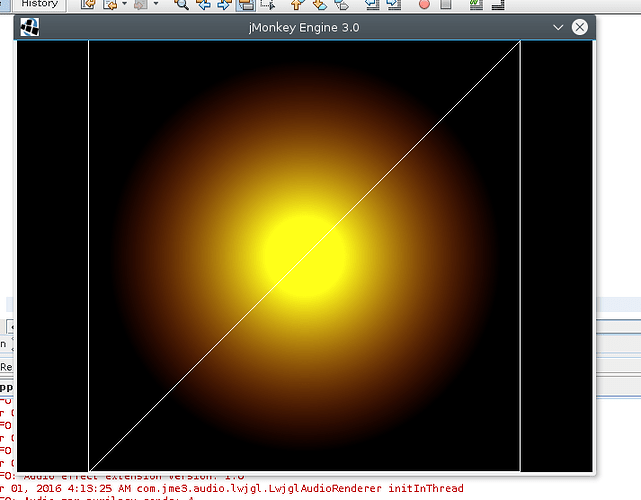 I figure this might be useful for particles or lamp halos.

So this is what I’ve been working on for the past month, a complete retexture of all modules and remodeling of some.
The Space Agency faction now has a cleaner design based on hex nodes. 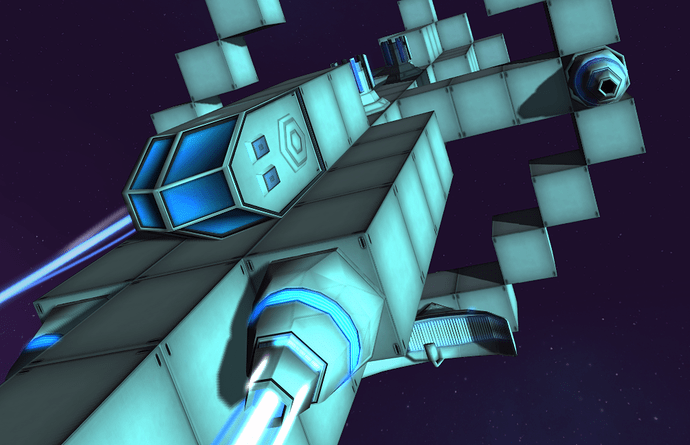 image_20160401_200405.png1004×648 604 KB
Most of this faction’s modules also glow in some places and change the intensity or even pulse depending on what their status is. I had to modify the damage shader a bit so it supports layering of two glowmaps as the damage overlay also has one. 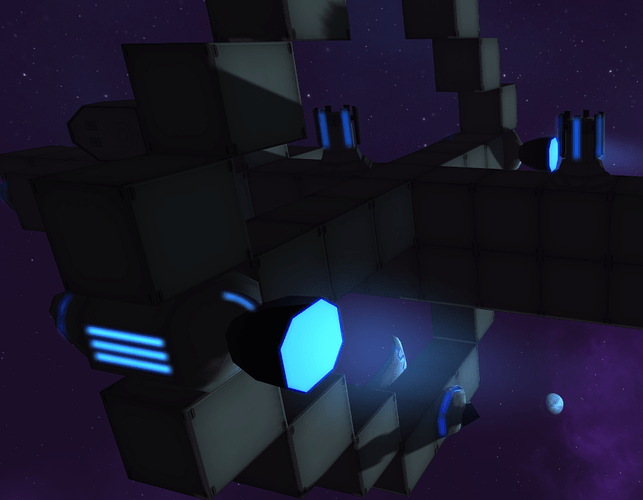 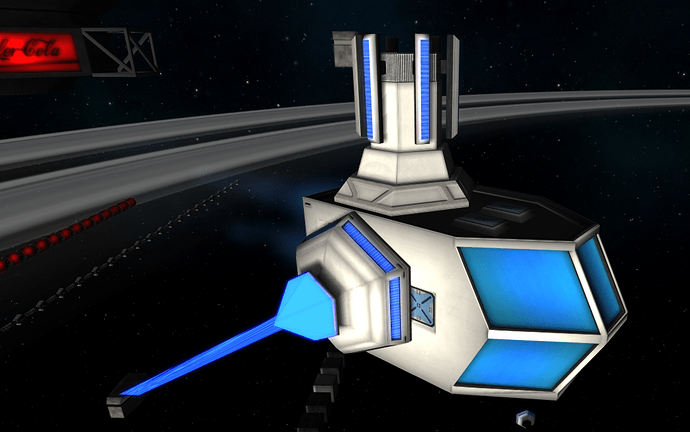 And since the whole forum is pink atm, it’s only appropriate to put a pink nebula as a background. 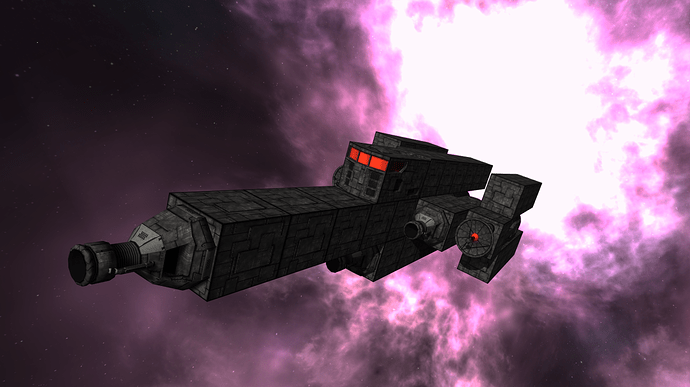 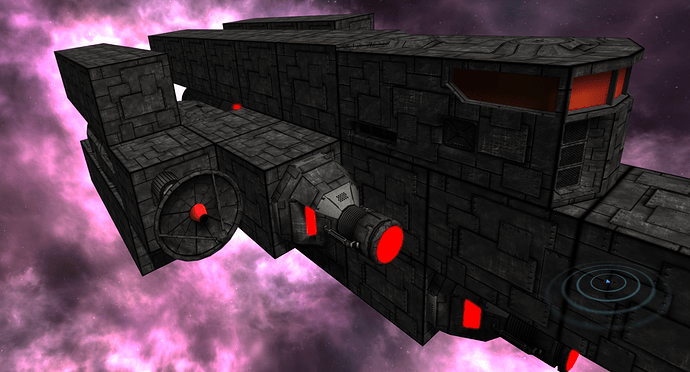 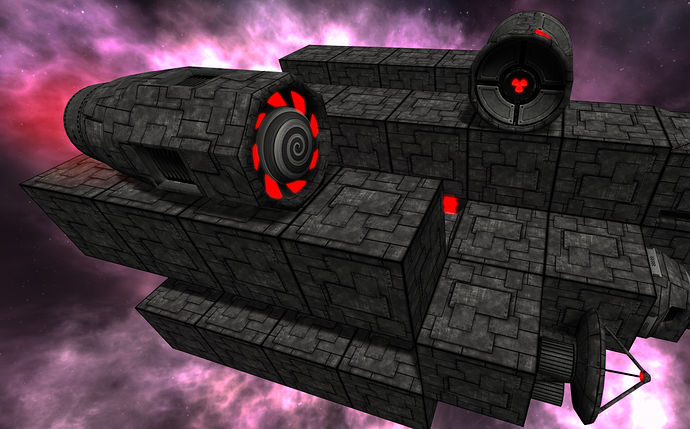 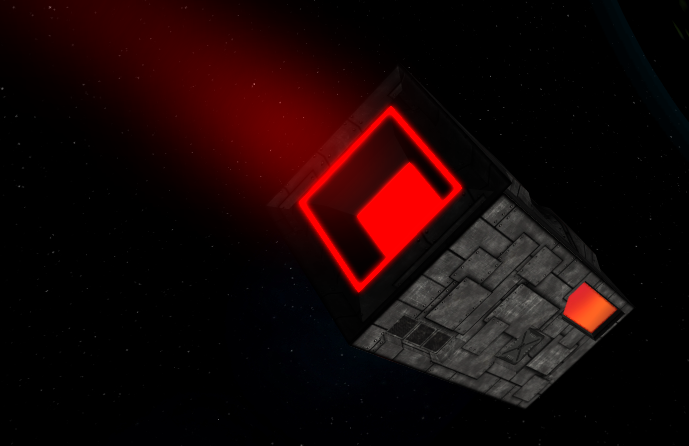 Stations now have action bubbles that open specific menues when clicked. This way you can just roll up and open any menu without any docking or anything. 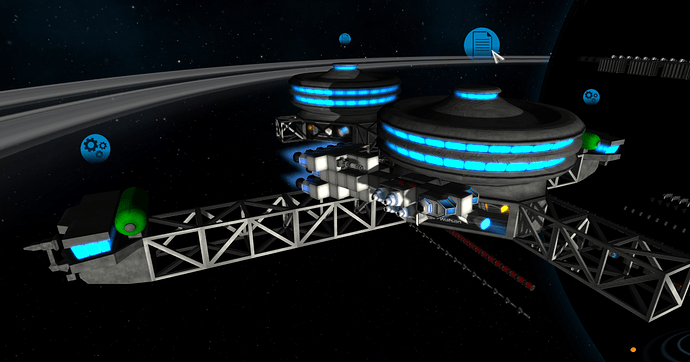 As I have no experience in publishing and am terrible at advertising I’ve teamed up with @empires who has tons of connections and is releasing War of Empires in a week and a half (April 12). If that goes well we’ll be working on getting newly renamed Lightspeed Frontier to Early Access somewhen in October.

So my circle shader is coming along. I added a range of new features. Circles can now fade between up to 7 different colors. You can add a texture map to multiply the color/alpha by, this map can be tiled and offset. You can also add a distortion map which can also be tiled and offset separately from the color map. Here’s a couple quick examples:

The above was created using two quads with the circle shader applied. One is a circle that fades from bright yellow, orange and red/transparent and uses a distortion map that has an animated offset. The offset of the center color and the position of the orange color are also animated to add a slight flicker. The second quad is just a simple fade from orange to red, the offset for the orange color is animated for flicker.

The above is an exaple of a ring-wave created with the circle shader. Instead of scaling the quad I animated the offset for the center color and the positions of the different colors along the circle. There are five different colors in this one. There is a black and white cloud texture map added that gives it that smokey look and a distortion map, not animated, that gives a little undulation to the wave.

Colors are positioned along the circle as a percentage of the radius. I also nixed the 10% padding I was using originally in favor of allowing the developer to set the radius themselves so you can add some padding if you like or not. Plus you could animate the radius. You can also set the center of the circle on the quad too.

…next month screens will be probably, from some industrial coffee packing machine, i’m rigging with new electronics/software, so no time for 3D stuff … hehehe… 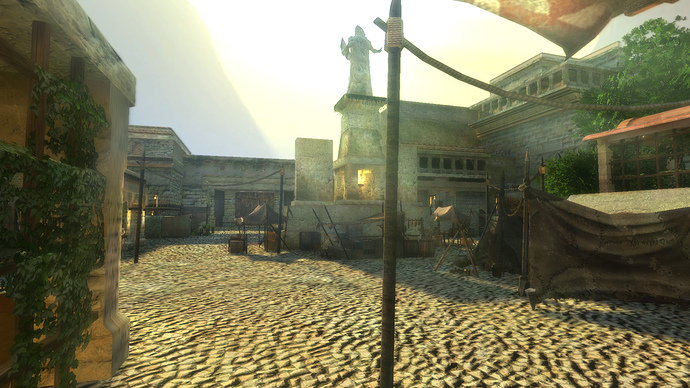 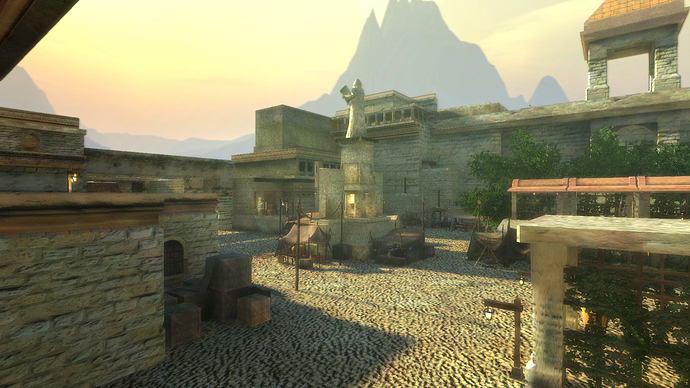 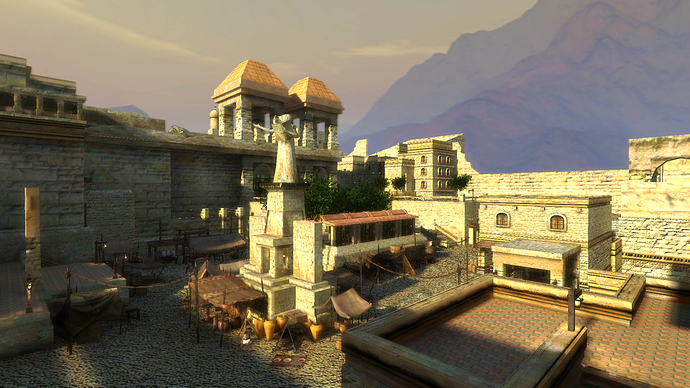 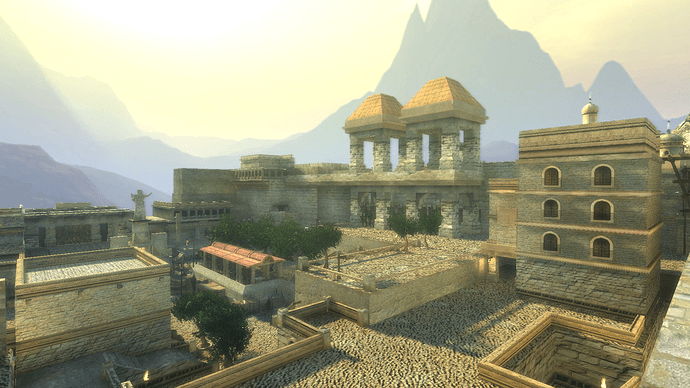 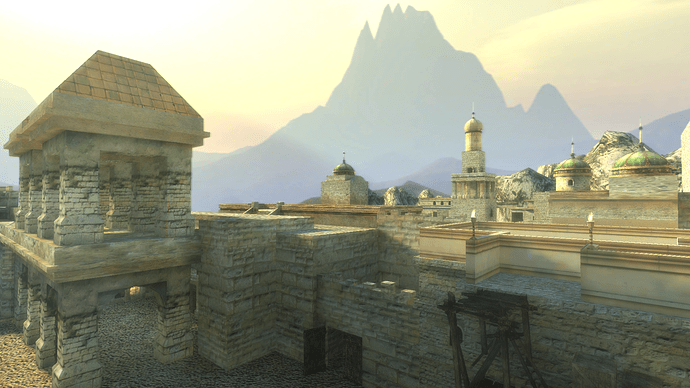 I remember you working on these clouds way back… they still look nice.

@thetoucher, you have more cool stuff in your abandoned projects bin then most people hope to make.

Man, it’s only the second day of April and it’s already looking to be a great month for projects. Everything here looks great.

[quote=“pspeed, post:10, topic:35512, full:true”]@thetoucher, you have more cool stuff in your abandoned projects bin then most people hope to make.

Agreed. @thetoucher I took a look at your YouTube page after that cloud video was posted and there’s a lot of really neat stuff there, but I didn’t see a link to a web-page or anything where I could learn more about any of that stuff.

ohh, boy, how much I envy many of the shots around this forum. This looks fabulous. I wonder if my game will ever look that good.

Next sdk release will have new light gizmo. Which can be moved, rotated and scaled.
the spot light gizmo still need a minor fix.
Hope you like them : 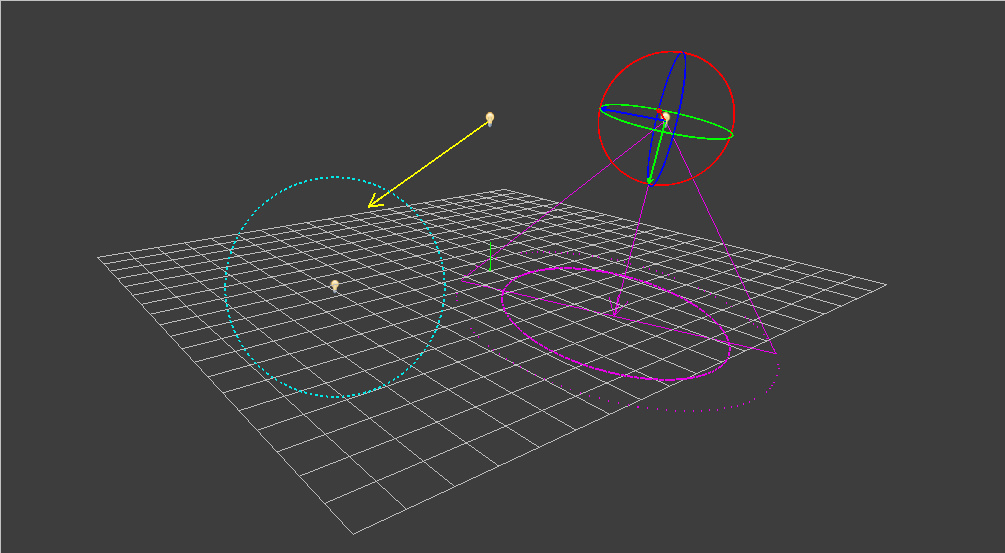 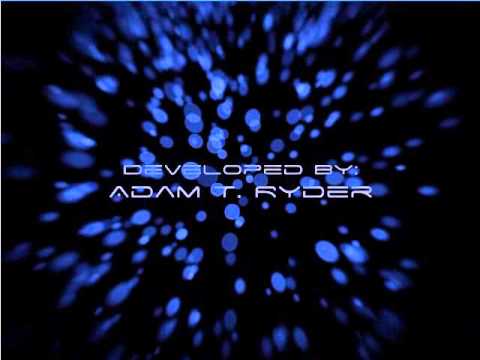 I used my recent circle shader to create a faux depth of field effect for Carpe Diem’s intro/main-menu animation.

This is achieved by setting a focal point vector within the camera’s field of view and then setting the circle shader’s Offset property based on the particles distance to the focal point. In this case the maximum offset, fully in focus, is 0.99 while fully out of focus is 0.3.

The particle’s themselves are actually white, I use a post-processing effect that applies vignette to the scene then color-balancing to give the particles a nice blue hue and finally overlay the text.

The particles are given a Brownian like motion by randomizing their travel speed and smoothing between speed changes using a bezier formula. The particles move and then face the camera which has a 120 degree viewing angle.

The particles are not additive, they are alpha blended. Their brighter overlapped appearance is achieved with color-balancing. Color balancing gives me finer control over the colors in the final product. Additive particles wouldn’t look quite right.

P.S. That white bar on the left side of the video is part of the window, my video capture software seems to have its clipping area offset by one pixel.

Being a big fan of the 2 originals and one of those people who bought WFTO, I have two ideas for you: