Hi guys,
I am finally done with what I wanted to do for this contest.
I did not originally liked the scene that was chosen but it actually grew on me, I love it now.

The game I made is “Hostage”. It is about a sniper that is recalled for duty in the city of dreams to help the police department take down a couple of BAD guys. They took over a BUILDING/COMPLEX with a few hostages.
Your main goal is to snipe each of these enemies from a helicopter and not hit the hostages.
You have 3 lives, or hostages you can hit. But then it is game over.

Try to get as high score as possible.
ALSO, if you shoot more to the center of the windows you will earn more points.

I know this is something completely different from what I normal produce but PLEASE ENJOY!

Wow! Fantastic! Care to tell us a bit about how you did things?

EDIT:
It will be very interesting to see how they judge this… the games are sooooo vastly different.

So far we have:

Sorry if I missed anyone… off the top of my head ya know. Anyways… point being: They are so vastly different… all very creative. I certainly wouldn’t want to have to judge this. I have had fun playing each so far… but can’t figure out a way to compare them.

Wow, reminds me of the very first stage of an old Amiga game called “Hostages” (I think)

Hey, works fine, but for some reason I get a grafical glitch ?

Do you use some kinda of (unusual) postprocessing? Or have any other idea what could cause this?
I kind wonder, cause nothing else with jme has produced this so far.

It does not happen in the main menu or the briefing, only in the ingame screen. 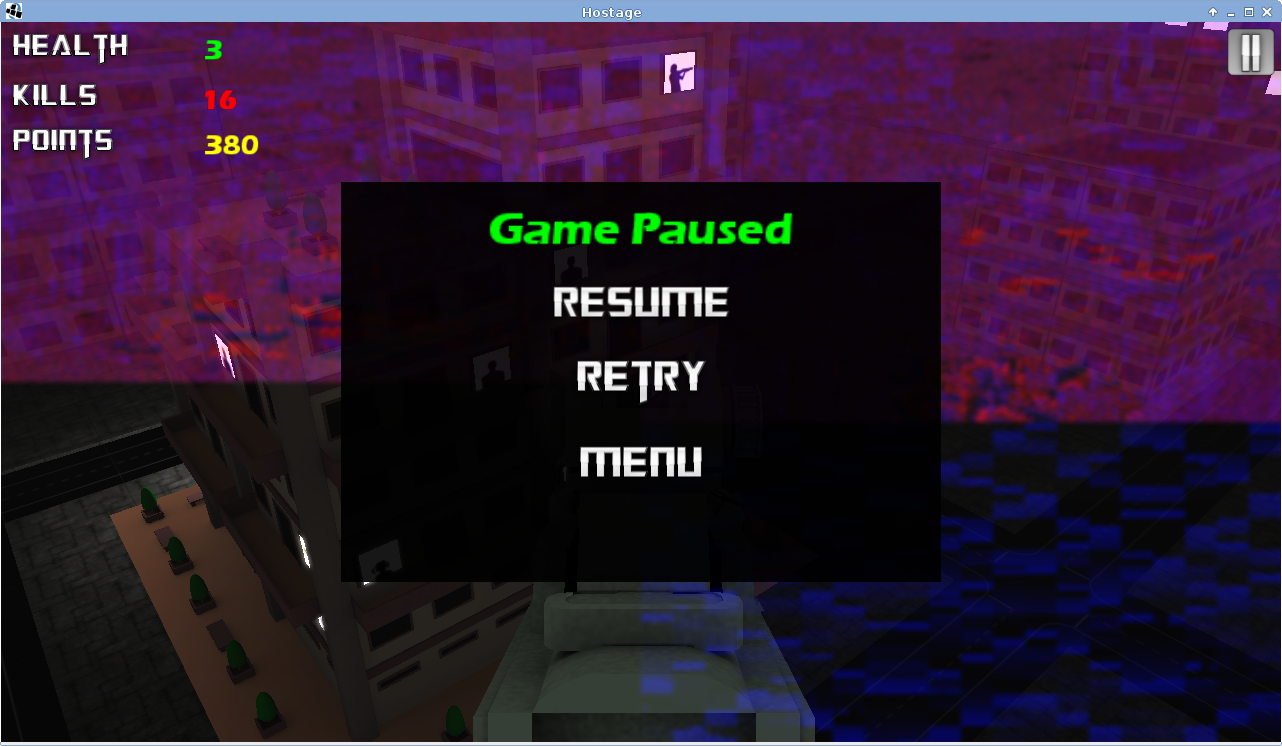 Hi guys,
Thanks for the feedback.
t0neg0d: What exactly would you like to know?
What mechanics or ui stuff are you questioning about?

Empire Phoenix, The reason might be the I use the FogFilter? I also make use of the Bloom filter. It might be that as well.

I will try to make a new build where you can disable the NICE FX stuff from the Options screen.

Thanks.
I really tried to do more with the surroundings of the city but I really did not have time or resources.
I also wanted to make a chopper rotor and inside so that it actually feel as if you are in a chopper.
Maybe next time.

And then some extra screenshots:

I looked forward to seeing what you would come up with and I was not disappointed.

O man, thank you really very much for this.
I really wish I had more time to spend on these type of things.
Hopefully someone somewhere will find joy in what I make.

Hi all,
Here is a fix for the people with low end graphics cards that do not want to use the post processing stuff and filters.
You can go to the Options menu option and the last button there will allow you to put high graphics on/off.
The link is the same as above, Fix download

Yeah with the low res it works without any grafic glitches.

I even managed to shoot every hostage!

Empire Phoenixsaid: Hey, works fine, but for some reason I get a grafical glitch ?

Do you use some kinda of (unusual) postprocessing? Or have any other idea what could cause this?
I kind wonder, cause nothing else with jme has produced this so far.

It does not happen in the main menu or the briefing, only in the ingame screen.

I get the same glitch on my Mac, I turned off “High graphics” in the in-game menu and it went away (and I got better fps). Nice game, first try 10 points, second try 790

Thank you all for the awesome feedback.

One other question I have, would anyone here suggest that I take this game(idea) further and make an awesome game for android?

I have a few other games I am working on and I don’t have time for all at the momentum and I have to start prioritizing these games so that they can get done and deployed.

Any suggestion or ideas will really help.

Have to say that following is my personal opinion, i have no statistics or facts to support that:

Any game for me requires a game mechanism that you get better over time.
The user/game interaction needs to fit the game and the platform you are using.

For your game that would be:

As in most shooters the game is easy if you know to use your mouse to target. And you probably get better at it if you play more.
On android i would not see how to make the imput working…

To be clear, i like the game, and i would vote for you in the competition here since your game has everything a game needs:
Atmosphere, Gameplay and whats probably most important, it looks finnished and polished.

But for me the input system kind of depends on the mouse. (Maybe i am only to uncreative)

WOW, thanks for the great response.
If I were to make he game for android I would certainly use some kind of on screen Joystick.
It will be that the player will be able to touch the screen anywhere on the left side and control the gun movement and if the player is touching down on the control for aim he will then be able to touch down on the screen in order to fire his gun.
That was my basic idea if I think about it.