I’ve been working on an AppState that serves as a universal game wide console that shows when you push the grave key, a common feature of most PC games. The nifty gui project has a Console in it, but you need to incorporate nifty in to your game to use it. (Which means requiring the use of nifty, and all the code that goes with it).

My main goal with it is to keep it easy to include in to your project and to only use components that come with a fresh jmonkey install (besides needing to download the plugin/jar file of course). The console itself is just a few Quads and BitmapTexts on the guinode. Adding/removing console commands are similiar in nature to add/removing key mappings with the InputManager.

It’s an AppState, so all you need to do is attach it to the StateManager.

I’ve been working on it since I made this post a week ago to make it “plugin” worthy. I’ve added a few new features to make the console more configurable.

Also as @zarch mentioned having a “DebugModeAppState” was a little confusing with the name. Instead of renaming it to “ConsoleDebugMode” I actually just canned it and made “ConsoleDefaultCommands” instead. the DefaultCommands appstate just contains a couple mappings that manipulate the console’s settings (rather than having the debug commands). Its main purpose is just so you can quickly add and test out the console.

For now you can get the library and the sources+javadoc here: http://www.mediafire.com/download/pwaqr4vpx53369a/ConsoleAppState-v0.99.zip

Issues that I’m currently working on:

Here is a screenshot of it in action… 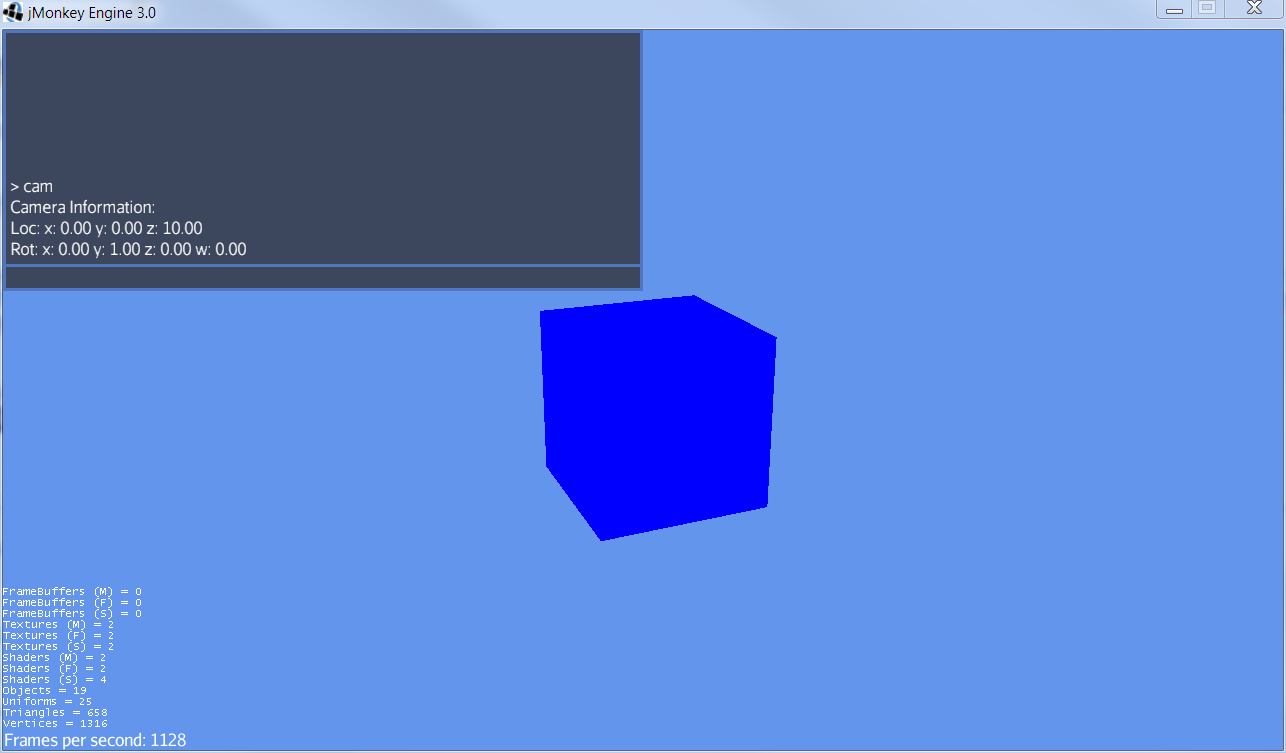 Whoops I meant to include the link to the jar file

(Filed removed, use the link from the top of this page for newest version.)

btw I have written javadoc style comments for all of the public methods, though I can’t seem to figure out how to include those comments in the jar file >.<… most of the methods are pretty self explanatory though

This looks really nice. A feature quite a few people are going to have a use for I think!

The only suggestion I’d make is to change the second app state name to ConsoleDebugAppState so it’s more obviously tied to the first one.

This would make a nice SDK plugin.

Will you make this a plugin ?

I would like to make it one. I’m not completely sure on what the process is to get access to upload to the plugins repository.

cool stuff. This has details on making a plugin http://hub.jmonkeyengine.org/wiki/doku.php/sdk:development:setup?s[]=plugin

You need access to the repository to upload it, @normen can help here