Does a Terrain tweakable?

I tried to manage this by code but couldn’t , it was 3 month ago maybe it changed i’m interrested thank you.

There is a Terrain Editor in JMP that allows you to adjust the terrain height to create mountains and valleys. You can also submit a heightmap image to the terrain to define how it looks.

Ok but how do you except to be precise with a heighmap ? Also jmp has an issue with the terrain saving system isnt another way ?

The latest version of JMP will save terrain correctly, the last alpha release version had some issues.

Are you looking for an exact height value for the heightmap? The imageBasedHeightmap loader will interpolate the height of the terrain by the grayscale values of the pixels in the heightmap image.

it would save me a lot of time if it is possible to do that : http://www.youtube.com/watch?v=YDPvoLn6LS8

There are raise/lower tools in the TerrainEditor (not SceneViewer) in JMP already. There still needs to be flatten, smooth, and roughen, tools however.

how do you access to this tool ? i don’t understand anything >_< sorry…

Select your scene in JMP, then click on the mountain icon on the top tool bar. Or, you can right-click on your scene file (in the left-hand Projects window) and select ‘Edit Terrain’.

but isn’t a possibility to do that with the mouse like a real editor ?

Yes you can. The terrainEditor window has these two tools (raise and lower) 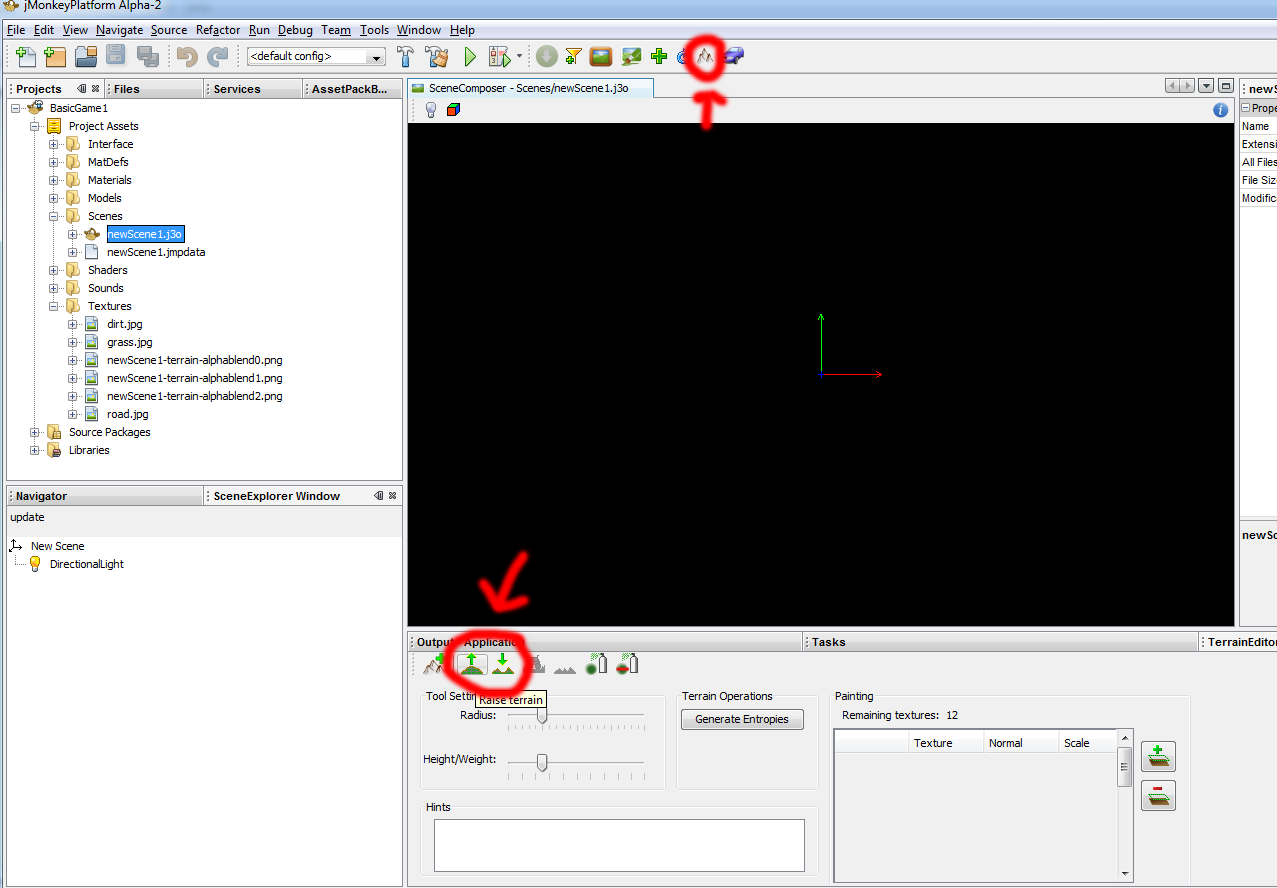 That seems nice , i’ll try this tonight after work . By the way i have the same issue about saving that means if i create another scene the terrain is disappering i have the last monkey version / nightly build, and if i try to save my projet it stays gray i can’t save the project or the scene , how do you do that ?

I have a friend who is testing , he’s telling me that he can’t find thoses icons … can you explain step by step what you did to have this ?

Are you sure you use the latest version of JMP?

This was not in the alpha 3 release and it’s only available if you enable JMP nightly updates.

My friend updated according to the documentation you gave me , and he hasn’t thoses icon Sploreg just shown but thanks for the answer

Edit : My friend just reupdated it works now sorry for the disturb

The Painting tool is missing just at the right of the red circle from your screen , is that implemented yet ?


Sploreg said:
There are raise/lower tools in the TerrainEditor (not SceneViewer) in JMP already. There still needs to be flatten, smooth, and roughen, tools however.

Dude please be patient, the terrain editor is a work in progress and not every features are implemented/functional for now.

Sploreg is already putting a lot of his spare time in it, and be sure that these things will eventually be done.

Besides he already gave a roadmap for painting and you acknowledged it in this thread, http://hub.jmonkeyengine.org/groups/jmonkeyplatform/forum/topic/cant-add-terrain/#post-116333

So please, be patient.

Damn i’m sorry , i forgot he said that i need some rest i work too much

Thank you Sploreg for all of your efforts !