Is there any way to check which nodes are being rendered right now?

I am testing instanced rendering right now and I noticed, that my frame rate does not change based on how many objects are on the screen, but only based on how many nodes are in the scene. I zoom in until I see only a single triangle on screen, or I zoom out until I can see the entire scene at once but the frame rate is constant.

I believe this is because objects are not correclty culled for being out of vision. I am probably doing something wrong. In order to analyse what is happening I would appreciate to know exactly which nodes are rendered, so if there is any way to find out I would very much appreciate to know.

Of course I am open to any other tips and recommendations.

When you say “constant” - do you mean a constant 60fps? If so, you need to disable vsync.

No I mean a constant 29 FPS. It is at 60 FPS if I cut down the number of nodes within the scene or the number of instances in the InstancedNode dramatically. I am talking about actual, real lag.

Yeah. It’s still vsync. It can’t render at 60fps, so the next best thing is 30fps - which is half-synced. It’s the best it can do to maintain vertical sync. If you don’t want that behavior, you need to disable vsync.

… not sure what happens after that. Probably keeps going until there’s nothing left.

And just to note - just because an object isn’t in view - doesnt mean you don’t have to worry about it. It will cull them, but if you have large scenes you need to split them into chunks, and add/remove them as the camera moves.

My scene is already divided into chunks. Right now I have 1010 Geometries for terrain and 1010 InstancedNode’s for trees. Each InstancedNode contains somewhere between 1212 and 3232 many Geometries.

Can you show a screenshot with the stats enabled?

Here is a schematic view of how the performance changes with the movement of the camera: 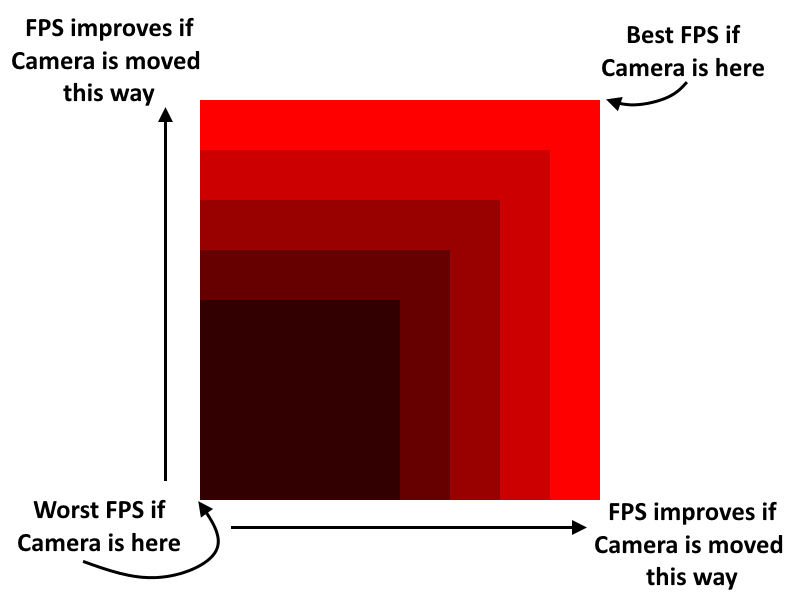 Also, sorry for not answering your initial question. There are a few methods. Best to read here.

Testing if a Spatial is within a viewport General Help

I was wondering how you would go about testing if a Spatial in your game was within your current viewport, i.e. if the Spatial is currently visible anywhere on your screen. Thanks!

The whole object would need to be out of view in order for it to be culled.

It is an InstancedNode with many many trees (the green spheres for debugging purposes in the screenshot). This is, after all, a big terrain with forests and whatnot. The actual tree model will be low-poly though (perhaps changing depending on zoom level) so it will drastically cut down the actual number of triangles.

Regardless of that I would still like to know why ALL triangles need to be rendered at the lower-left corner while only 1/10th is being rendered when the camera is at the top-right corner. It is obvious that something is going wrong.

The simplest way to do as you requested is calling .checkCulling(Camera cam) on whatever it is you want to check, but it’s obvious enough that they aren’t being culled. The first port of call would be to ensure the the cullHint it set to dynamic, and secondly to ensure each object is individual, and not part of one huge mesh. If an object is not in view it will be culled, but it won’t cull any of it if even an very small portion of it is within view. Is it possible that some of your objects are actually one very large object merged together?

As I said a couple of times, I have 1010 Geometries, each with a custom mesh, for terrain. And then 1010 InstancedNode’s each one with somewhere between 1212 and 3232 Geometries (Sphere) for trees.

But for some reason the terrain and trees to the right and top of the camera are never culled. (unless I move the camera far away from any terrain).
I suspect the bounds of the nodes to be wrong somehow but I dont know JME3 enough yet to properly debug it. Which properties of a Node are responsible for culling? Where do I find how they are calculated?

It’s all open source on github. You probably want to start from here:

I did some more testing and found out that the BoundingBoxes for the InstancedNode’s are wrong. Even though all the Geometry within the node fits into a 323216 cube, the BoundingBox of the node always extends to the origin (0, 0, 0) no matter where the node is placed.

What controls the bounding box of an InstancedNode? Is there some kind of trap that I am running into when creating the node or its geometries?

After some more digging I found the following:

As you can see the BoundingVolume was extended significantly along the Y-axis for some reason. I assure you, that the InstancedNode has ONLY one child, and that child is the tree Geometry.
Can anybody please explain to me how this is happening?

Okay, I can not figure out why the BoundingVolume is incorrect. I cant find the relevant piece of code.

Instead: Can I set the WorldBound of a Node directly? I know exactly what the bounding volume of the node is going to be since it is a very simple box. If I could just directly overwrite the WorldBounds manually, I think it would solve the problem.

Edit:
I did this very very dirty hack (just for testing purposes!) and NOW I get constant 60 FPS with VSync on:

Everything still gets rendered nicely btw. All terrain and trees within the cameras view are rendered.

The fps are better when you move to the “top right” because your instance node is culled (thanks to the bad bounding box which stay at 0, 0, 0), and then as soon as you will increase the bounding this node will never be culled anymore :s

You have to split your trees into smaller chunks that you load/unload on the fly when you move the cam (search for paging system). You can always use instancing but one instance by chunk and not one for the whole world :s

I DID split the trees into smaller chunks. I said that numerous times. Look at these screenshot after the above hack:

As you can tell from the numbers, culling works now; triangle counts reflect the number of trees visible on screen. The FPS are good as long as I dont zoom out too far. The scene from these screenshots is still the same scene as the one from the screenshots above with the bad performance. (except for the fact trees and terrain are randomly generated)

The hack with the BoundingBox is the only change I made in code.

So except the fact instanced node bounding box is wrong computed, everything seems pretty normal then.

With 18millions polygons (when your cam is zoomed out) you can’t run at 60 fps and the vsync do its job by lowering fps to 30.