Hey guys! Hope someone can help me

I have created a scene and would now like to save it as an exe. Unfortunately it does not work…
that’s why i tried it with the standard example - same problem …
Am I doing something wrong?
I have java14 so I tried Java11 in the engine
Sorry I’m total beginner 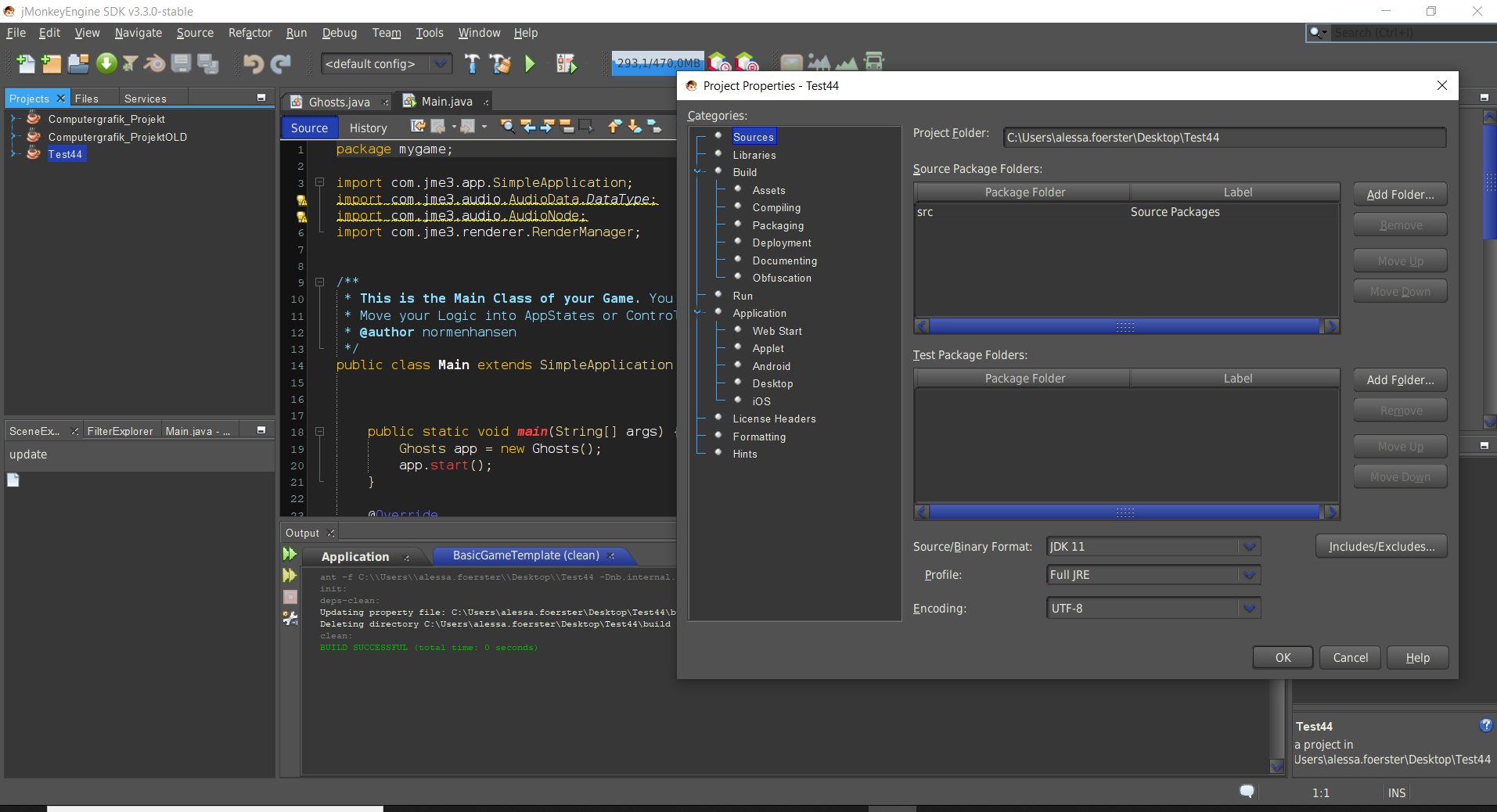 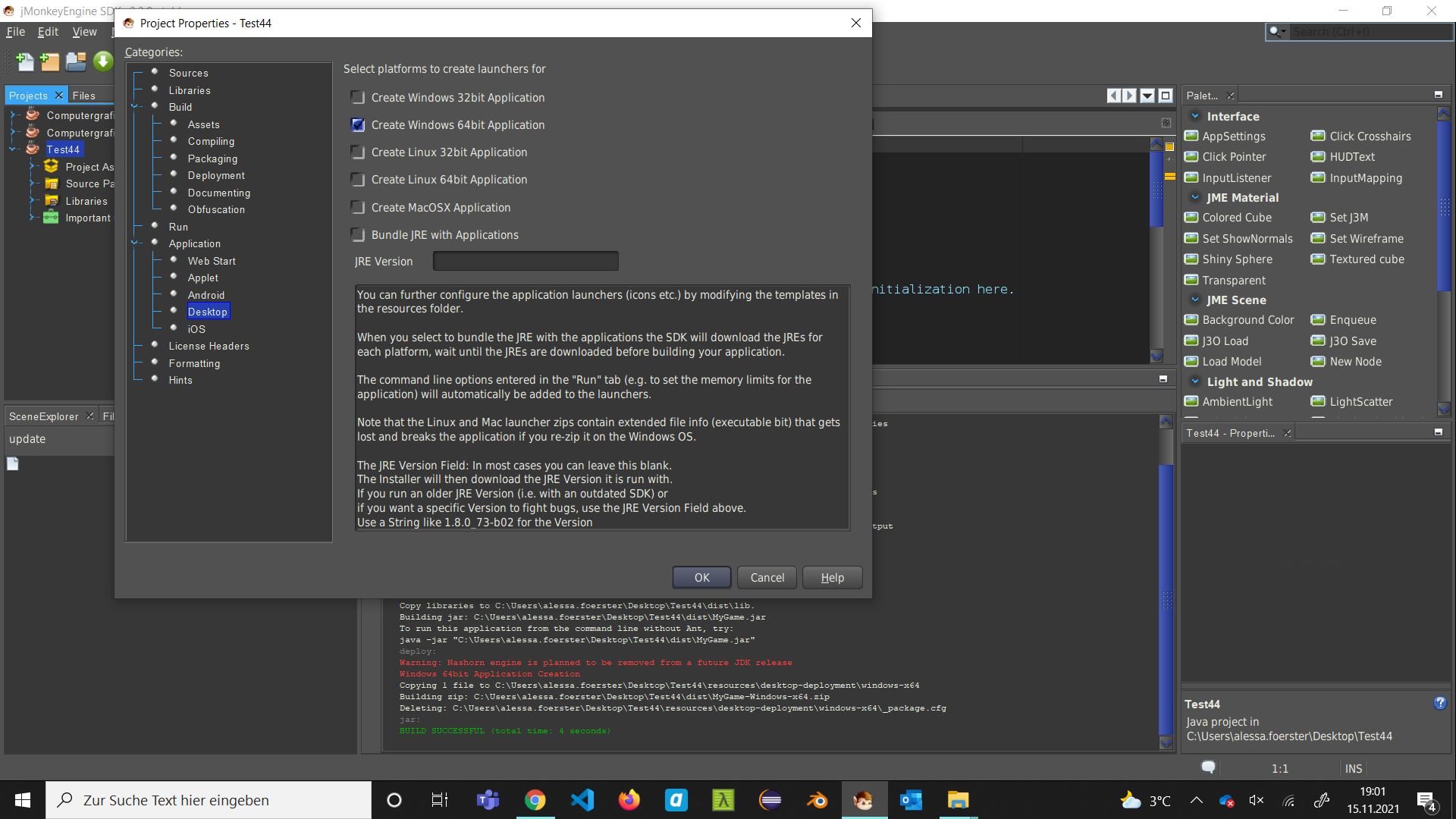 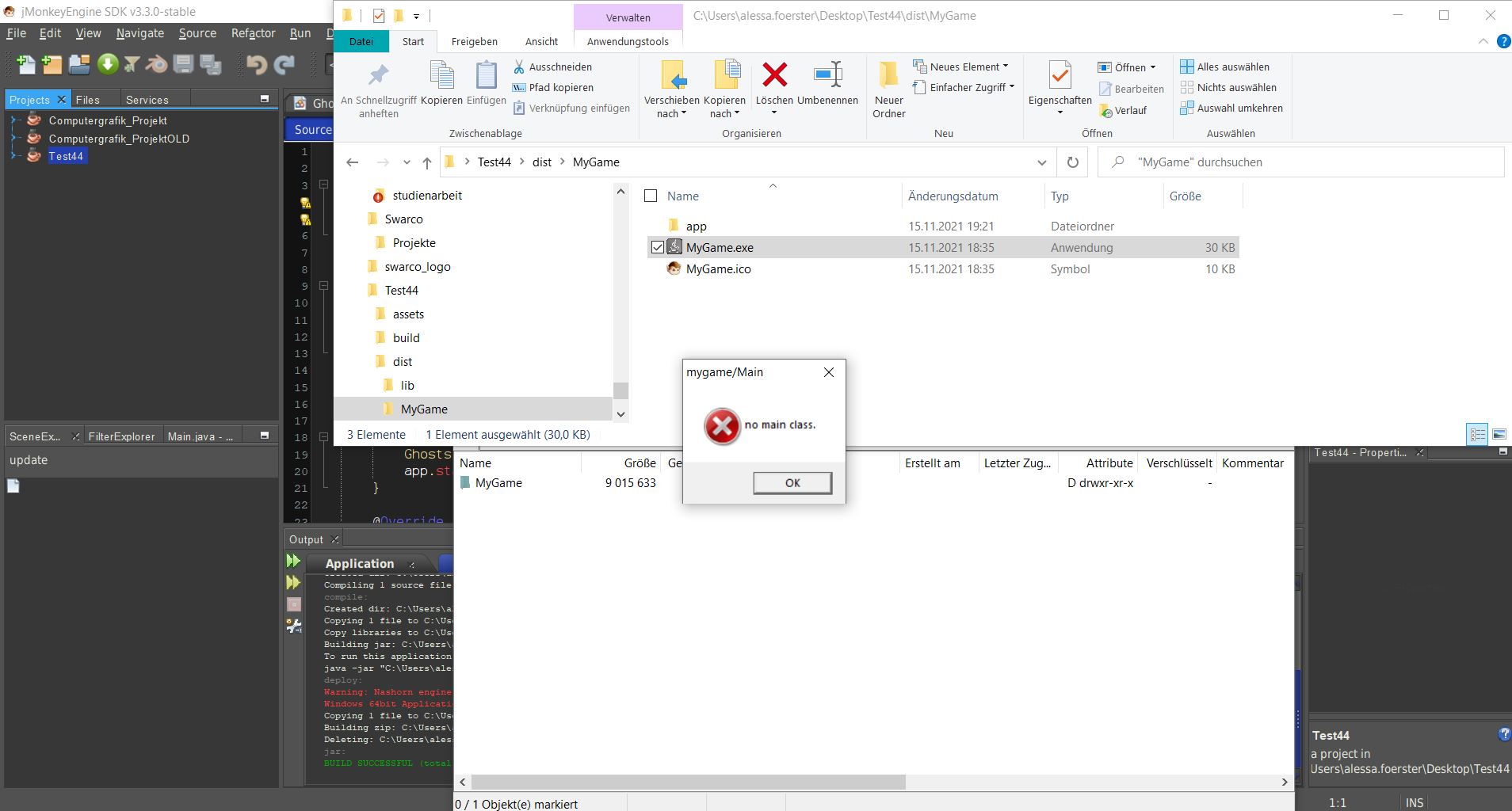 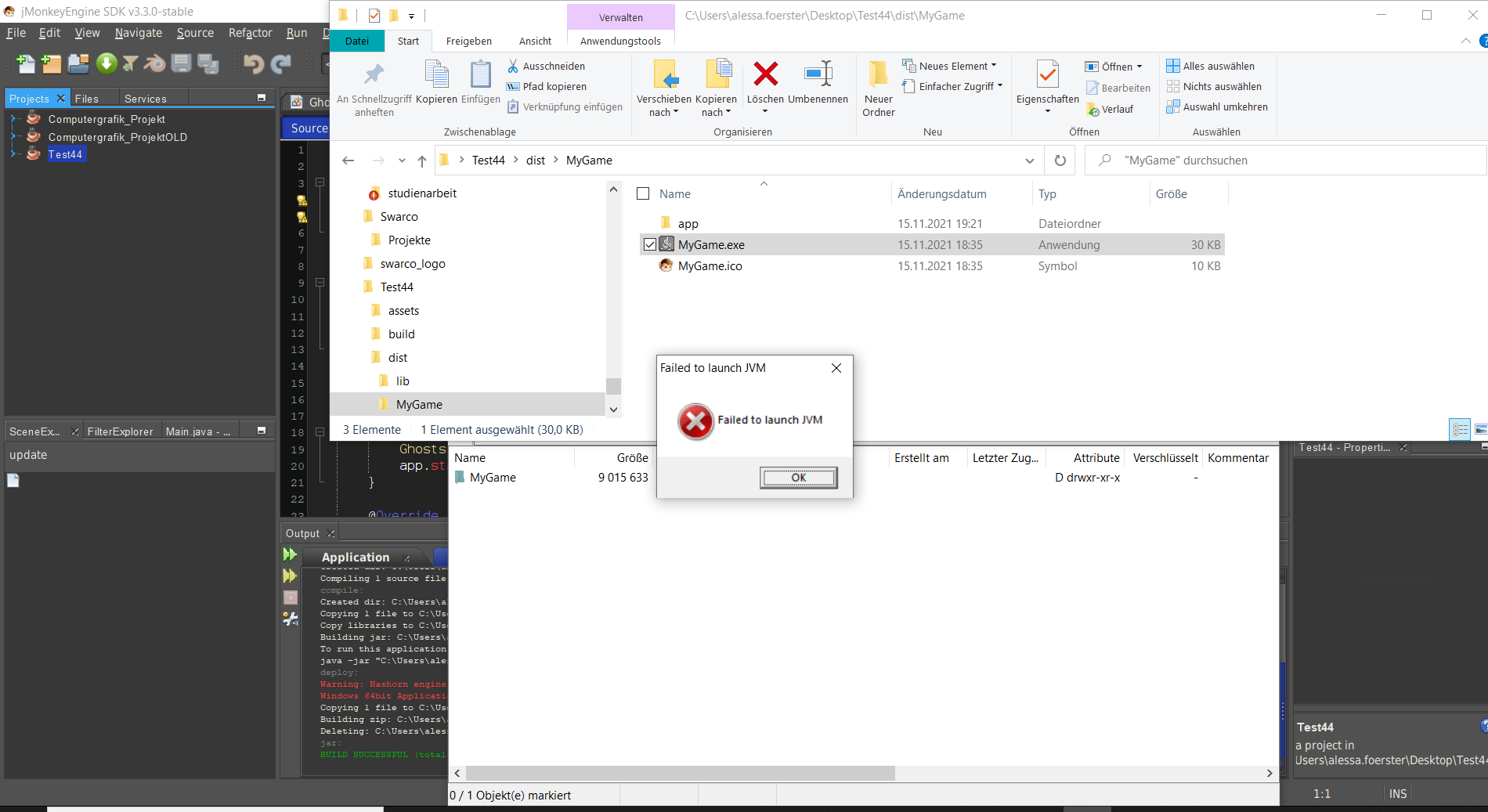 you need to have java installed.
if you want it bundled with the application,
also select the last checkbox in the second screenshot (toghter with Windows 64-bit)

but I have Java

I know it is no help, but it doesn’t work for me either. It has the same error when I do a build. 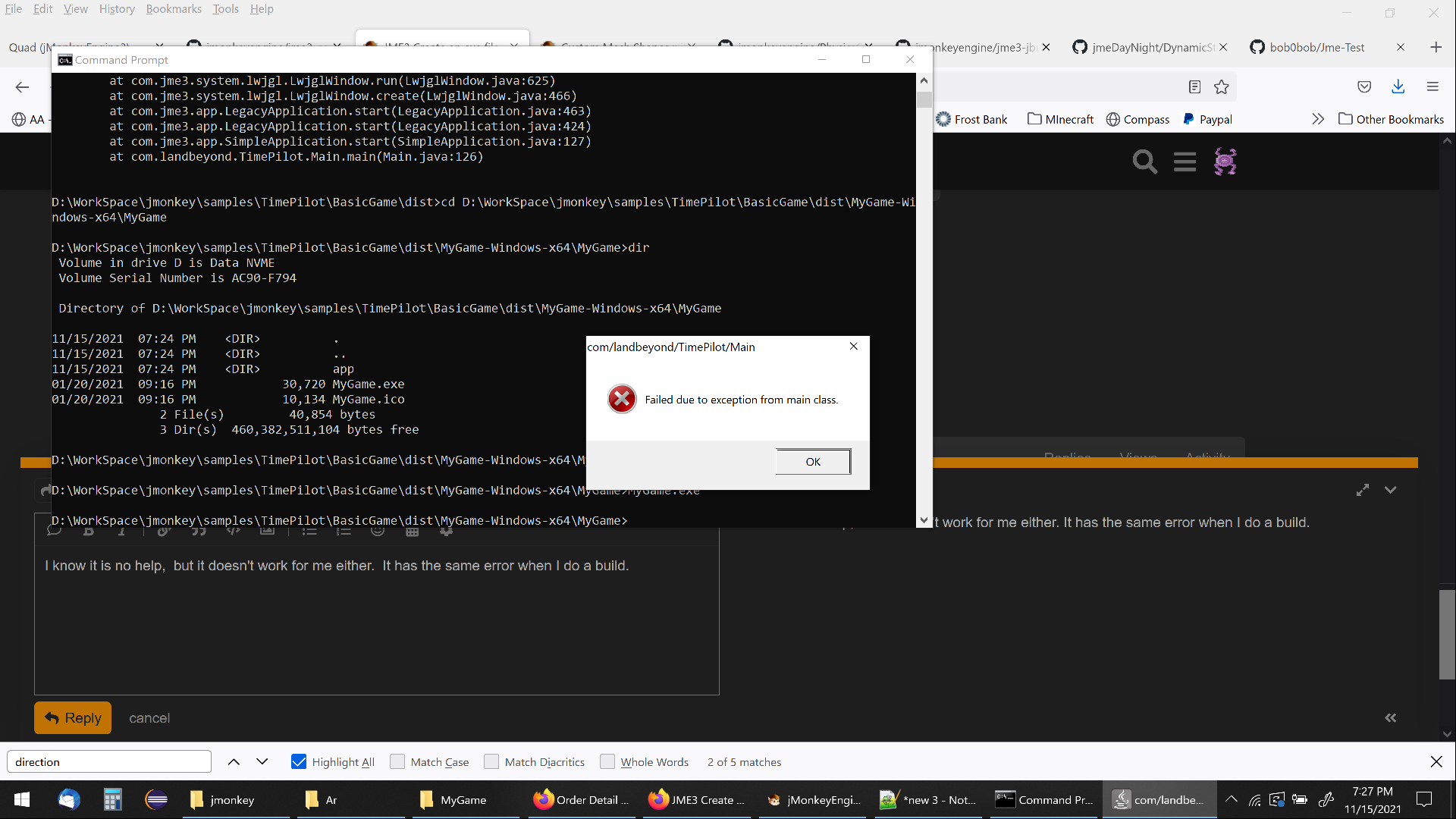 I even went into the dist and tried to manually run the >jar file and still got an error. 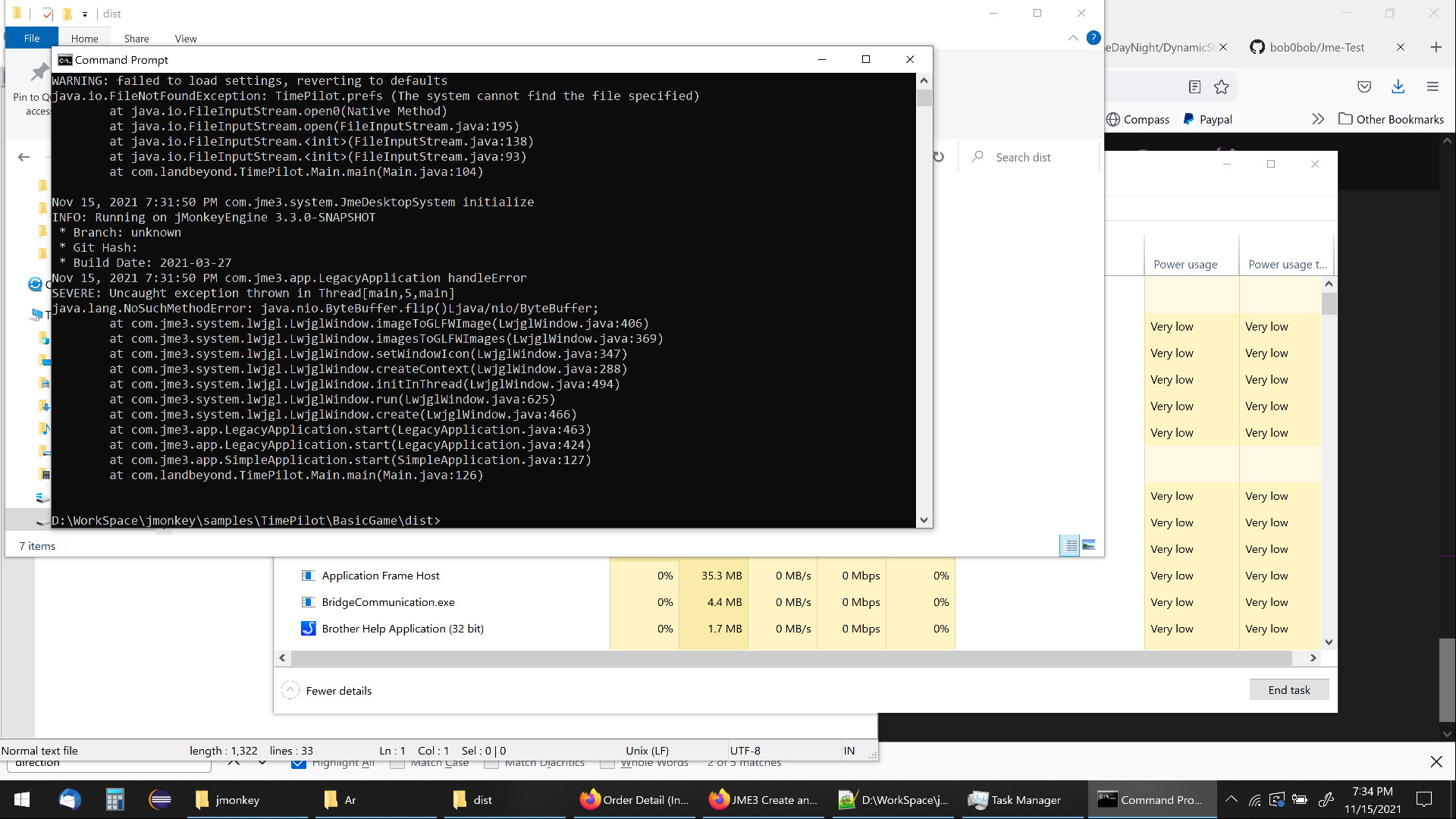 If you want run the .jar from command line check you have the right version of JAVA installed.
For all OS, to know your JAVA version (and if you have installed it) open a cmd and lunch this:

Ideally you have the same version set under Properties->Libraries->JavaPlatform.

To run the .jar copy/paste the command suggested from the builder, or open the cmd in the same folder where is placed your .jar and run:

If it doesn’t work read what is gone wrong, usually there is a self-explaining LOG, for example there are exceptions you have to fix before be able to run it.

For a different project some values have to be changed, I strongly suggest to read here.

Keep in mind that in this way the project embedded the JDK and:

I hope it could be useful

yes you were right, the engine platform was set to JDK11. So now I installed JDK11 on the laptop and deleted the old one (wrong version).

Unfortunately now I get a different error message when I want to open the jar-File:

and when I want to open the created exe-file this comes up: 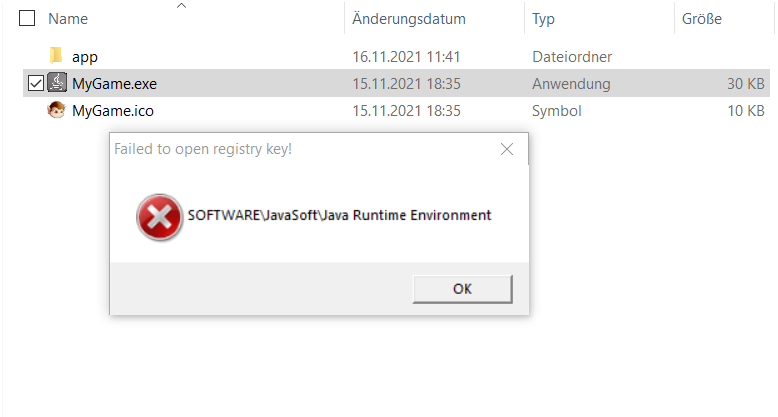 have tried it …unfortunately no

are you 100 % sure the path and the name is correct and its still the same error message?
also the exe you should start is in a .zip in the projectname/dist directory

I have now solved it for the time being by connecting JME3 with Eclipse. There I then created a Jar file and converted it with a converter into an exe…

it runs but unfortunately only objects that I have imported directly in the code are displayed. The scene with landscape is missing.

But thanks for your answers

any answer from here?
https://docs.oracle.com/javase/tutorial/deployment/selfContainedApps/index.html