Time is flying fast, nearing half way through 2020 already

Hmm…Well lets that aside let’s see some pics!

Everyone has seen this track before in horsepower racing, but this time I have an aerial view of the track and surrounding terrain. Also, this track is FINALLY almost finished, so now I’m turning my work to a new track, but I’ve only just started on one, so maybe someone could give me some ideas regarding a theme? 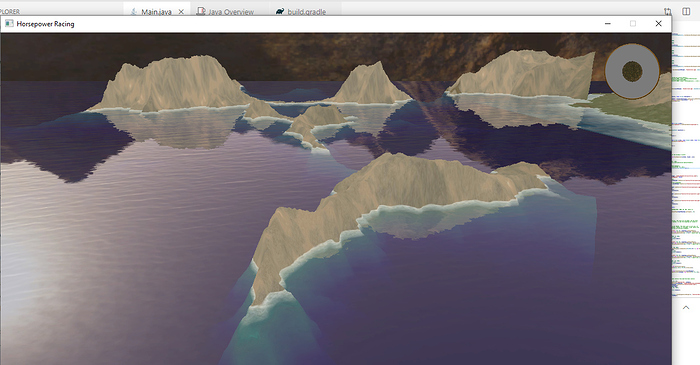 I know you are waiting, what is one of these new projects?
Well I’m also working on a shooter game called “Armageddon”. Again, I’m still coming up with ideas as far as themes.
But I do have a few models already for weapons 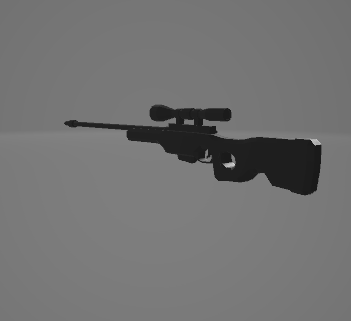 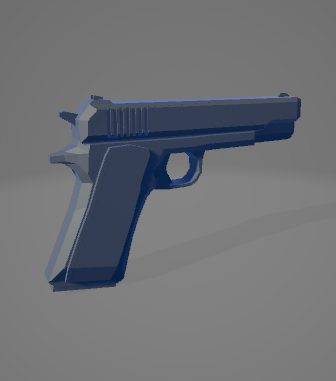 And that wraps up my work, let’s see what everyone else has got!

depend = required.
softDepend = not required but used if available.

All pretty cool and working well. 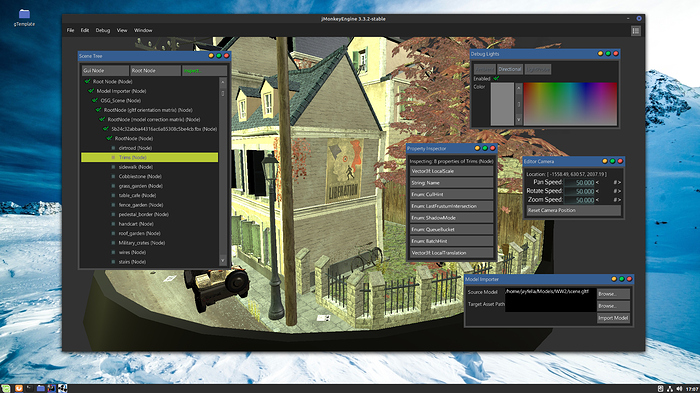 what progress it is? (average in percent)

I had to spend a couple of days learning gradle to figure out how to deal with some issues of plugins not bloating in size carrying around dependencies they don’t need - but not forcing that learning curve onto the end-user. I also had to figure out the best way to provide javadoc and sources for the API. I wanted to provide a single dependency that merged all of the sources and javadoc, but that seemed like I was working against the grain - so now you just depend on each module you want to use - a lot like JME. So the API is still changing nearly every other day - it’s still volatile, but slowing down. I think I’m over those parts now.

Right now I’m doing boring work, creating components for each type (vector3f, string, etc…) so you can edit them. I still have to write the docs, but I’m not overly concerned about that.

It’s a never-ending project, but I’m still on track for 4-6 weeks from now.

The Gradle Plugin is already on github, so the code is slowly trickling into circulation…

I used all afternoon to build this castle, it turned out a lot bigger then anticipated 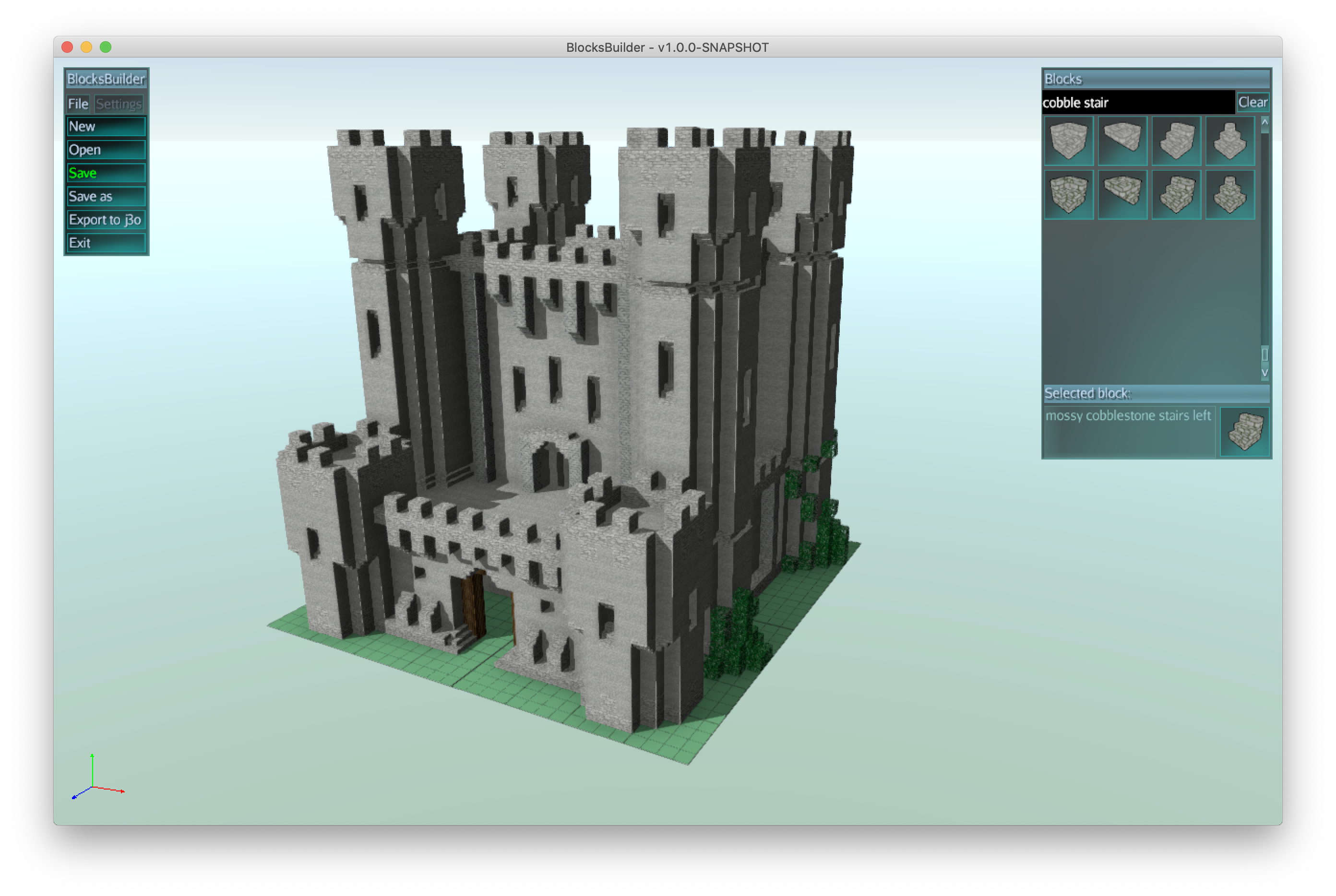 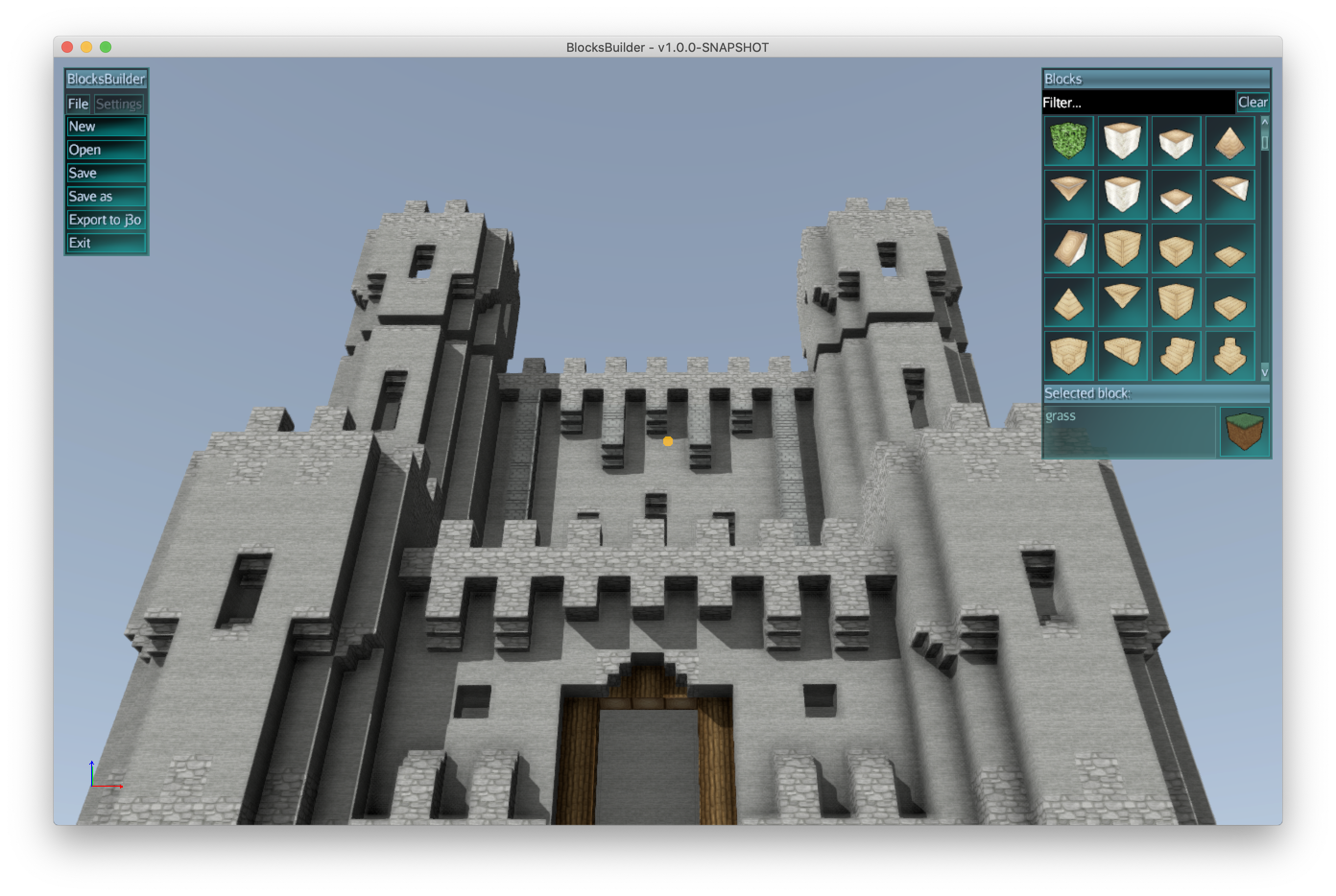 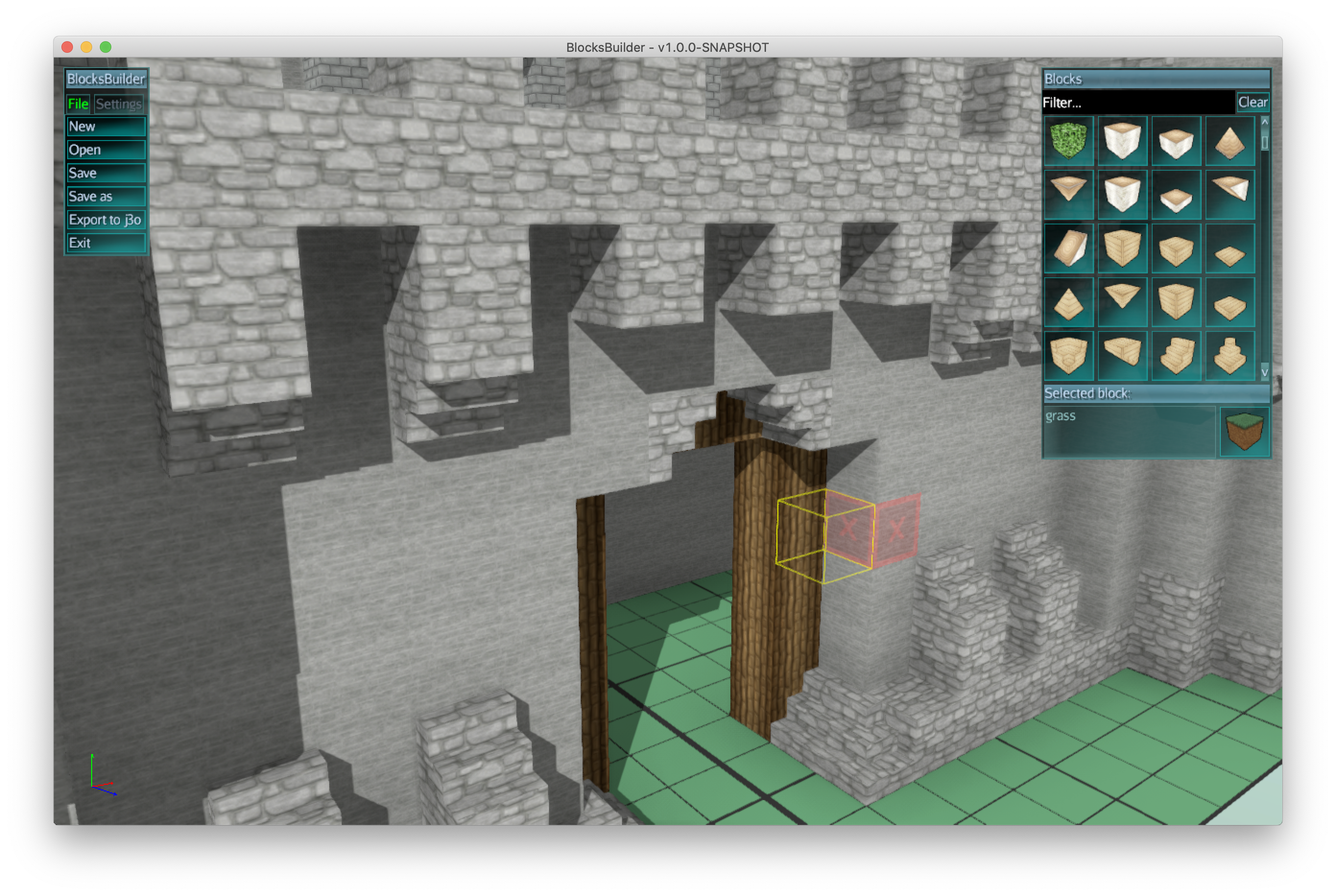 I got the inspiration from Block-Ed by @pspeed (the interface is quite similar and sky is done with SimFX).

@remy_vd
Looks awesome, the lemur GUI impresses me almost as much as the buildings themselves.

I haven’t yet laid out all my plans for the different tracks in HP, but if I choose to do a voxel style map, I’ll surely try Blocks!

Thanks! I was once again impressed by the ease of use and professional quality of the Lemur API.
The panel showing the blocks with an on-keypress filter was a breeze to build. There is no default component for it, but with the cellgrid, slider, textfield and a focuslistener it was build in no time.

Yes, Lemur is by far the best GUI toolkit out there. Once again it shows how amazing you are @pspeed

I got the inspiration from Block-Ed by @pspeed (the interface is quite similar and sky is done with SimFX).

Hahah… I was going to say that it looks very familiar.

I even checked to see if you were one of the patreon committers that has access to BlockEd source (which would have been totally fine, too).

Character rotation on waypoints is not smoothed out yet and no animation is applied to character. 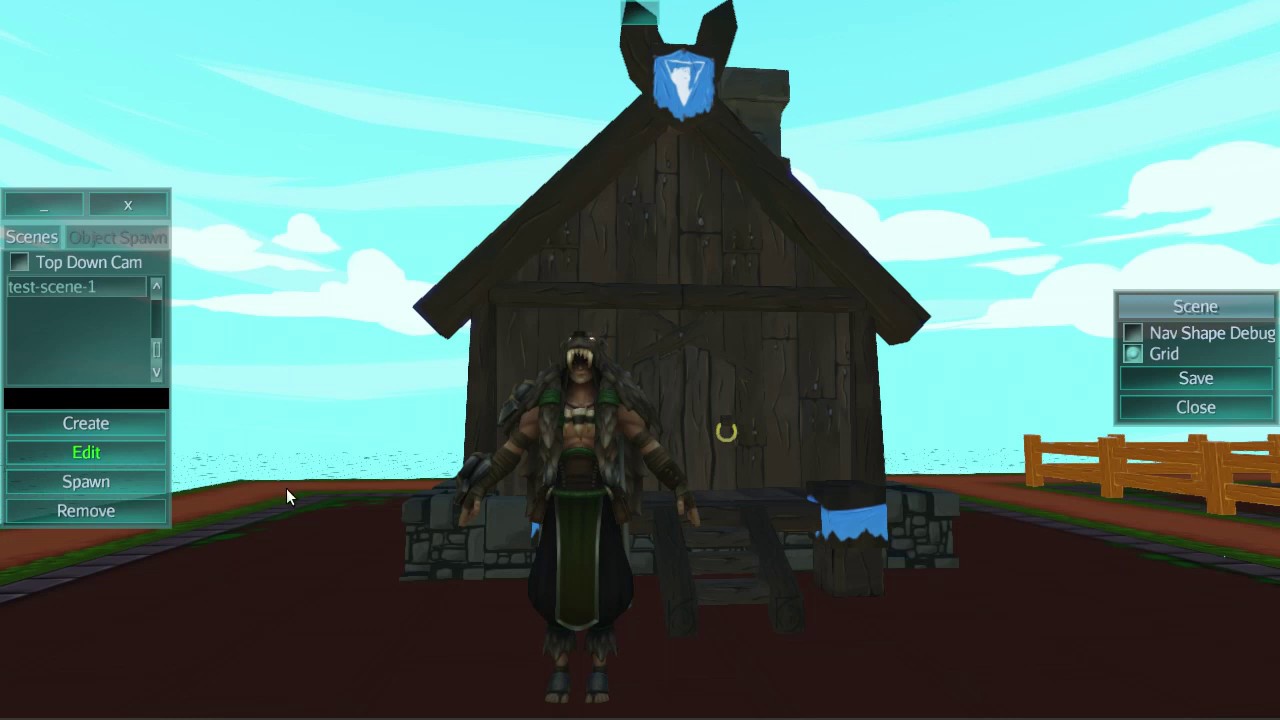 What are you using for pathfinding, your own code or something else?

What happens when you click inside the non-navigable fenced in area?

What happens when you click while already traveling along the path?

What are you using for pathfinding, your own code or something else? 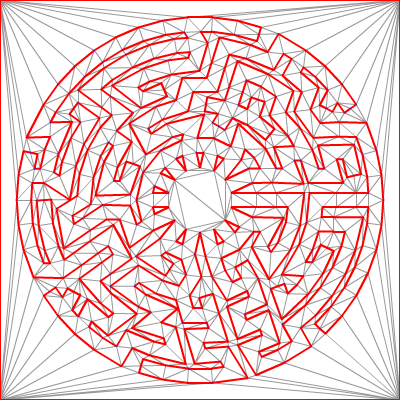 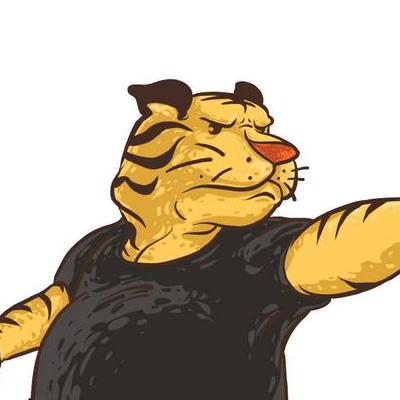 Easy 2D polygonal pathfinding for Java. Contribute to implicit-invocation/jwalkable development by creating an account on GitHub.

What happens when you click inside the non-navigable fenced in area?

It won’t find a path from outside to inside (and vice versa) if the area is closed. You can already see it at the time 1:32 from video

What happens when you click while already traveling along the path?

I have set it to cancel the current path and follow the new path.

You can already see it at the time 1:32 from video

I see now. Shouldn’t you just move to the nearest poly instead? Having a dead mouse click would suck in an emergency. Assuming there is combat in the game.

Ill look it up, haven’t heard of that one. Thanks.

I see now. Shouldn’t you just move to the nearest poly instead? Having a dead mouse click would suck in an emergency. Assuming there is combat in the game.

Hmm, yeah, sounds good idea. Will see if it is possible to do. Thanks

Ill look it up, haven’t heard of that one. Thanks.

Please feel free to let me know if you are interested to use it, I can share my code if you want.

I took an old idea and give it a refresh.
It is jmonkeyapp that can be attached to any PID and let you visualize in 3D the latest stack trace. A sphere is an individual method…and if the sphere is bigger it means that the method is called more frequently.
Also the vector length informs if you are seeing the same thread number.

Only Windows for now, and this is not an actual program running, I was just testing it with generated random stack information…

ps: sorry about the video quality 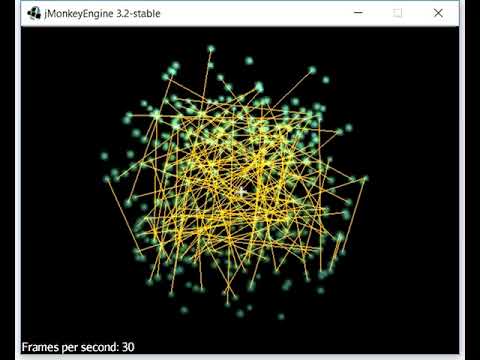 Love the ‘toony’ style of your game. It’s really nice!
I’m curious to see what it will turn in to. What genre/type of game will it be?

What genre/type of game will it be?

Super early screenshot - or more of a proof-of-concept - of a live Lemur Theme Creator / Editor. You change a setting, you see the change immediately. The settings are stored in JSON format. I haven’t implemented background images, but since you can Base64 an image - I could probably get away with storing an entire theme in a single JSON file - and thus sharing would be really simple.

It would be a really cool way to get some nice themes going. 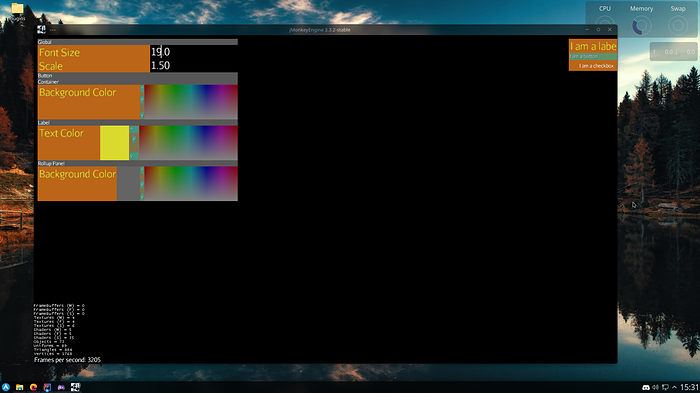