My August project is to add multithreaded physics spaces to Minie. Currently, I’m stuck. This post provides background. My next post will be status report and a plea for help/advice.

Multithreaded physics spaces are not the only parallelism available, nor are they a panacea for all Minie performance issues.

From jme3-bullet, Minie inherited ThreadingType.PARALLEL, the capability to dedicate a single Java thread to physics. This allows physics simulation to proceed while the rendering thread is blocked, or (potentially) in parallel with rendering. Bullet’s multithreading occurs at a lower level and a finer grain. It is orthogonal with this feature.

Bullet v3 reportedly has the capability to exploit the SIMD parallelism provided by graphics adapters. Minie is still based on Bullet v2, so it doesn’t yet have access to this feature.

AFAIK, Bullet’s multithreading support is limited to btDiscreteDynamicsWorld::stepSimulation(), which corresponds to Minie’s PhysicsSpace.update(). If there’s a performance benefit, I expect it will be most pronounced for a PhysicsSpace with a large number of dynamic rigid bodies. I don’t expect any speedup for soft bodies, multibody objects, sweep tests, ray tests, or contact tests. I’m unsure how much multithreading will benefit kinematic rigid bodies, ghost objects, or characters.

Not all of stepSimulation() is parallelized, and threads will doubtless conflict somewhat over shared resources such as locks and memory bandwidth. So even in ideal cases, I don’t expect stepSimulation() to execute 12x faster on hardware with 12 CPU threads.

Meanwhile, open-source development of Bullet appears to have stopped. There have been no commits to the main repo since May, and no official releases since November. Most of the user documentation is in a PDF that hasn’t been updated in 6 years.

The pure lock-step parallel execution like JME does it has the potential for odd frame stutter… and depending on how bullet is stepped it may result in varying accuracy on that side as frames are sliced up differently. Imagine the case where rendering and physics are almost taking the same amount of time. If physics is taking a little longer than 60 hz by even just a few microseconds then we may drop a whole visual frame. It can also work in the other direction where bullet has to slice up frames and ends up with one that’s super super small (which with float will definitely affect accuracy at some point).

Just something to think about.

My own physics integrations tend to be based around a networking model so I’ve already built buffering and tweening in. Physics and rendering can run completely independent as long as the view slightly lags the simulation (by at minimum a single frame). The view is always interpolated between known good values so motion is always smooth.

It comes with its own new set of things to worry about but it is nice that the physics loop and render loop are otherwise completely decoupled (can run rendering at 120 hz and physics at 50 hz and everyone is still happy).

I know you’ve had conflicting experiences. We’ve had this discussion before. I don’t wish to rehash it here.

I’ve been using the OpenMP API because it looked portable across a broad range of compilers and platforms. However, I discovered that OpenMP requires special compile/link options:

Apple’s Xcode is based on LLVM, but I had trouble using it to build for macOS. Xcode’s OpenMP support is reportedly disabled: OpenMP on macOS with Xcode tools

I should be able to work around this with build tools other than Xcode, but for now I’m focusing on Linux and Windows platforms.

For reasons I don’t yet understand, multithreading exposed an old bug in GImpact, which you can read about here: pure virtual method called during TestCloneShapes on Linux · Issue #17 · stephengold/Minie · GitHub

I’m concerned about the compile/link options because Minie’s native libraries get dynamically loaded into a JVM which was probably built without these options. How compatible are these binaries with one another? Do the necessary OpenMP libraries get loaded at runtime? I don’t know.

My concern deepened when I used GDB to step through multithreaded native code. GDB generally has good thread support. However, I noticed garbled local variable values in the stack traces. For instance:

Notice how the value of timeStep (which is passed without modification from internalSingleStepSimulation() to predictUnconstraintMotion()) appears to become garbage. I’m pretty sure this is a GDB artifact, since stack corruption of this sort would break the app’s functionality. Without a reliable debugger, it’s difficult to be sure what’s going on.

For performance testing, I modified the TestBatchNodeTower app from jme3-examples:

And here’s a multithreaded run:

As you can see, multithreading actually made physics simulation take more wall-clock time.

Meanwhile, I have a colleague who tests Libbulletjme, which is basically Minie with all the JMonkeyEngine dependencies removed. They’ve run their own performance tests of multithreading. Their app creates 500 bodies on a Windows system with 12 CPU threads. They report that all 12 CPU threads go to 100% utilization, yet (qualitative) performance is no better than it was without multithreading.

Without knowing how the multithreading was actually implemented, poor scalability almost always means high contention of shared data… but then it’s weird to have all cores operating at 100%. It’s like they traded contention for shuffling data around into thread-specific buffers but then one thread (the visualization) still has to wait for all of the buffers to sync up.

I’ll gather my own results on Windows, so I can directly compare between OSes.

Today I measured wall-clock time per physics step on a tower-of-bricks app. I tried with multithreading and without it, on both Windows 7 and Linux. The same hardware (2012 desktop with 4 CPU threads) was used in all tests.

It wasn’t super scientific, but sufficient to convince me that MT sped up physics on Windows, while making it run slower on Linux. However, the single-threaded Windows performance was much worse to start with: 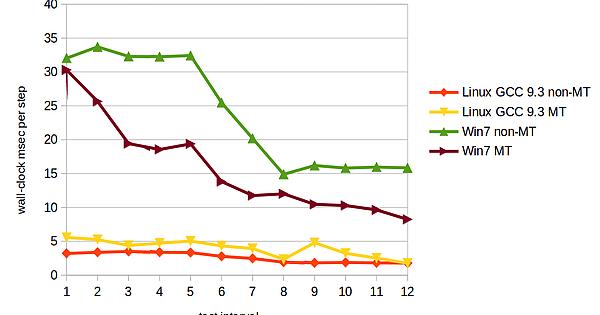 Note that the Y axis is time per step, so lower results are better.

I plan to re-run the Windows tests with Windows 10 on a modern laptop.

Also, I got Quickprof working on the native libraries. Analyzing some Quickprof dumps may reveal where the performance bottlenecks are.

Wow, I did not expect to see such a discrepancy between Windows and Linux.

Same, @tlf30. That’s a pretty wild disparity between them…

Can you post your testing app as source or executable so we can run on our machines? this way we can collect data from different devices including mobile ones

how is it possible there is so much difference between Windows and Linux?

it shocked me. Are you sure Windows were not running its Disc/etc checks that slow everything

Wow, I did not expect to see such a discrepancy between Windows and Linux.

Me neither! The difference could derive from the compilers (GCC 9.3 -O3 versus Visual Studio 2015 default optimization). However, I suspect Windows 7 was intentionally crippled around the time of its EOL, to encourage customers to upgrade. That’s why I wanted to re-test on Windows 10.

Can you post your testing app as source or executable so we can run on our machines? this way we can collect data from different devices including mobile ones

Yes! My previous post was rushed, and I neglected to include that information:

Multithreading support isn’t in any Minie releases yet, so build from source. For maximum comparability, check out commit hash 16e011be.

If you run the app using Gradle, I recommend disabling assertions (line 20 of “common.gradle”).

Multithreading is enabled for Windows64 and Linux64 … and is not available for other platforms such as Android. To disable multithreading, edit lines 82 and 88 of “MinieLibrary/build.gradle” to remove “Mt” from the build flavor … and then perform a clean rebuild of the entire project.

Here are test results from the Windows 10 laptop… 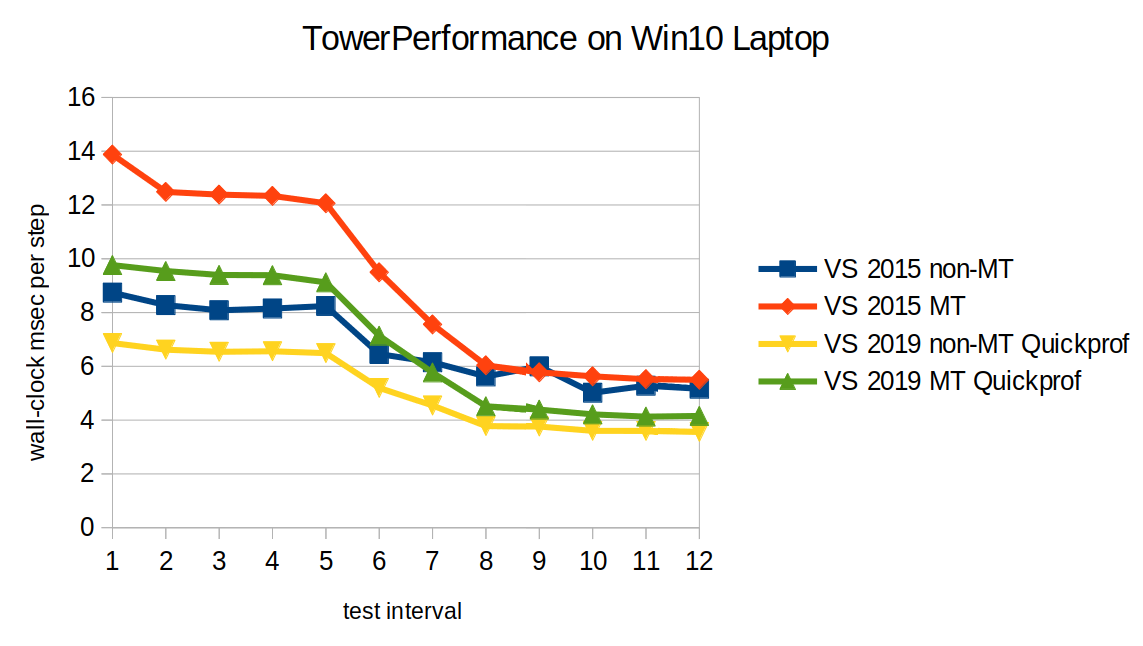 I’m not sure. If I re-run the tests, what would be a good way to check for that?

I’m not sure. If I re-run the tests, what would be a good way to check for that?

i just mean look at Task manager, when sort by name, it show “background processes” where you can check if something slow down System. Usually at least for me even without that for first 5-10 minutes it use disc at 100% so it slow down System too(idk if it defragment or what). So it would be good to check there CPU/RAM/DISC if are low usage when start doing test.

Anyway it sounds like MT help CPU when physics work slow, while performance is worse for fast CPU.
Something is odd with this grahps, but hard to say what it is.

edit: seems like i will need upgrade NB to stop using Gradle 7* for Minie project, since i have issue:

it would be good to check there CPU/RAM/DISC if are low usage when start doing test.

Thanks for the tip. 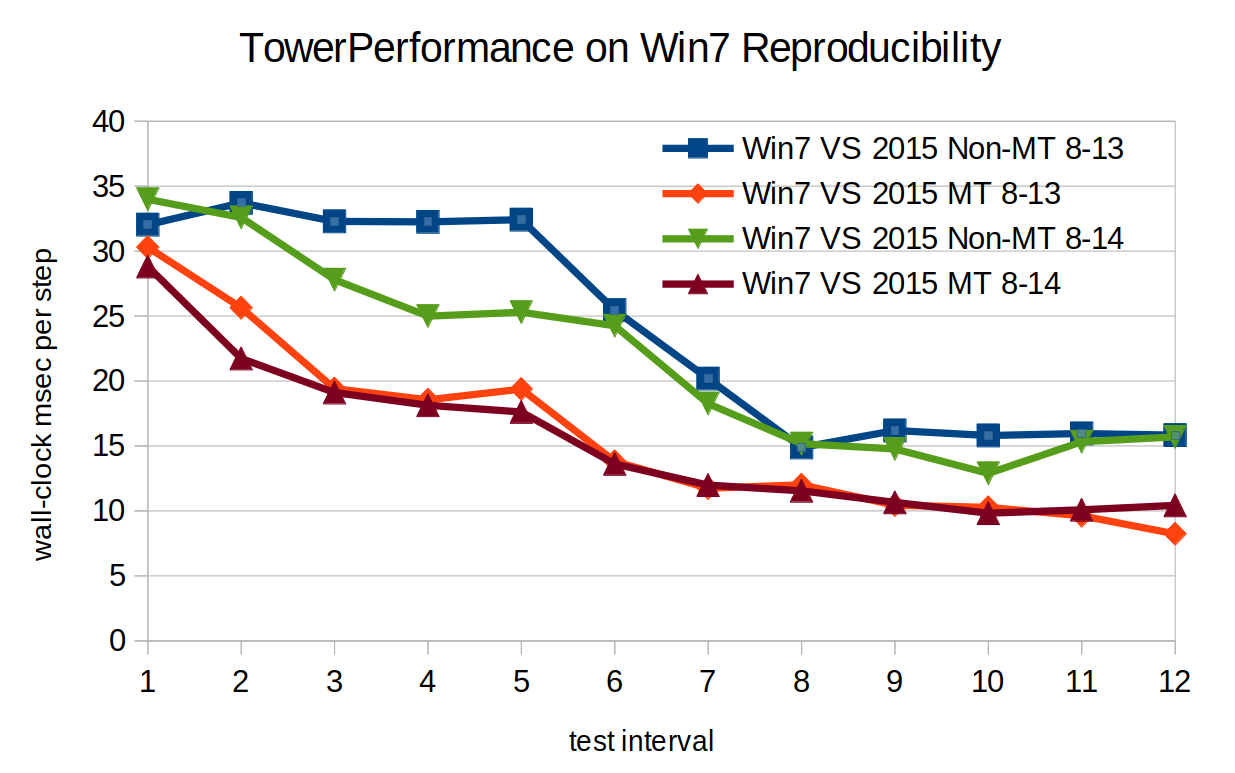 During the multithreaded test, I saw utilizations near 100% on all CPU threads.

I calculated speedups (Non-MT time divided by MT time) for the new measurements. They ranged from 1.18x to 1.78x. But it’s clear to me that Minie’s performance on Windows has major room for improvement!

I’m still using JMonkeyEngine SDK v3.2.4, which I believe is based on NetBeans 7. When I run builds from the SDK using the Gradle v7 wrapper, I get warnings because the “-c” option is deprecated in Gradle v7. So I may have issues when the Gradle v8 wrapper is released, but for now I’m OK.

If the Gradle v7 wrapper is an issue, you can either:

The upshot was a new release of native libraries for Windows, compiled with the “/O2” and “/Ob3” options. The good news is that the new libraries boost Windows performance. The boost was about 5x on non-MT tests. The gap between Windows and Linux performance (without multithreading) is now only 1.5x to 2x instead of 7.5x to 10x. The bad news is that MT performance did not improve as much as non-MT performance did. The MT speedups previously seen on Windows are now essentially gone.

Hi Stephen. I guess for the test app to work, there is a need to include Minie > 4.1.0 in the gradle config:

But for some reason gradle cannot find Minie > 4.1.0
Can you check & deploy the newest version?

idk when i will be able check windows currently.

Hi Stephen. I guess for the test app to work, there is a need to include Minie > 4.1.0 in the gradle config:

But for some reason gradle cannot find Minie > 4.1.0
Can you check & deploy the newest version?

It’s probably changed a lot over the years but a decade ago that would have been a HUGE difference.