My experiences with batching objects and the resulting frame rate

While I’ve been sick, I’ve been keeping myself busy with playing around with techniques for batching meshes. Honestly, I’m getting some results that I just wasn’t expecting.

Here are the things I have been playing with and the results I have seen so far:

Now, I get that this is not an ideal situation… this was a test mind you! But, I wasn’t expecting a frame rate as low as 35-40 FPS. I’ve been hearing for a very long time now that JME handles low object count, high vert count much better than the reverse.

For the hell of it, here are some screen caps showing what I was working on. I didn’t write it for any particular reason… though, I think it looks cool enough to consider writing a single player game around for fun. Buuuut… the frame rate issue has got me a bit puzzled… thoughts? 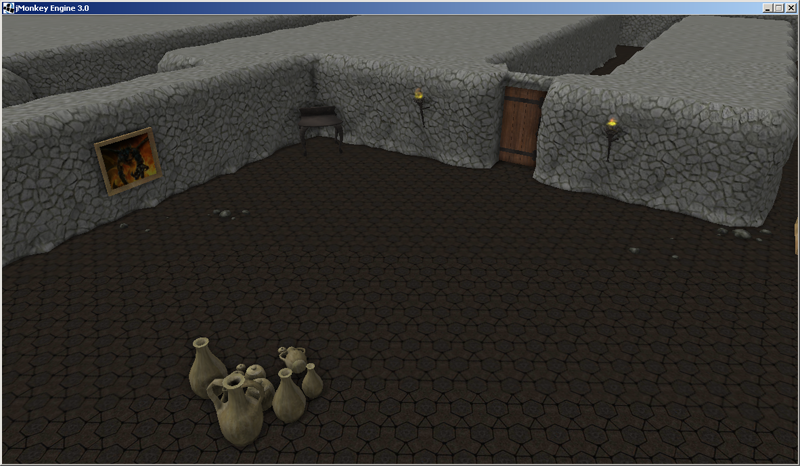 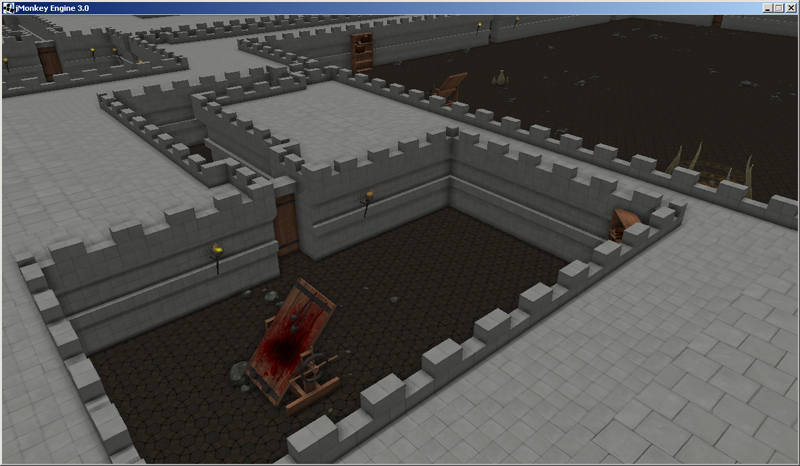 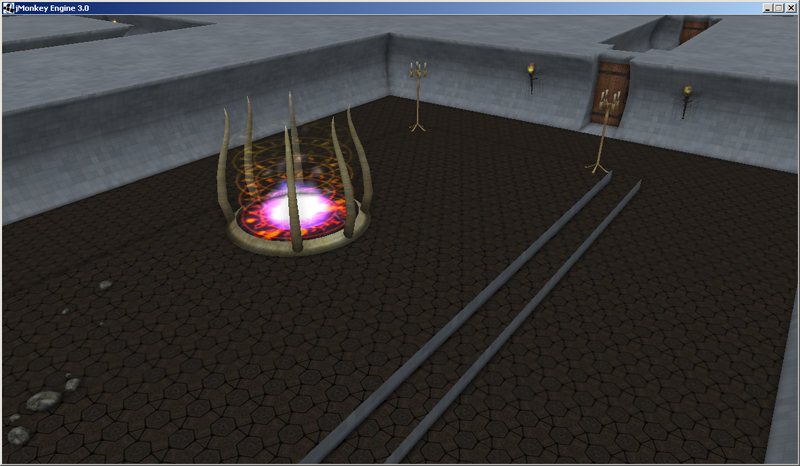 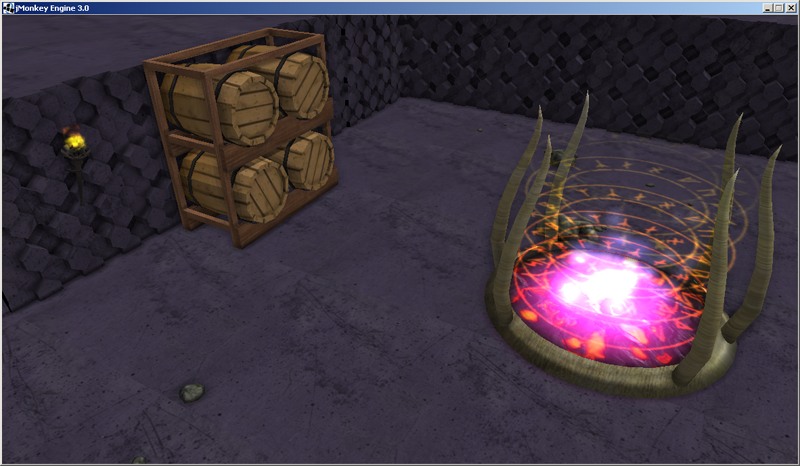 First off, I’m glad you are feeling well enough to be back with us =)

About the batching, I think you need to make a few smaller batches instead of one extremely large since with one large batch you are missing out on frustum culling optimization.
There is a sweatspot between object count and batch size somewhere between rendering one huge batch and a single batch for every object.

The game/map and the high quality assets looks really nice!

In first screenshot, are the walls using some kind of bumpmapping or are is wall uneven thanks to mesh geometry?

Can you show wireframe of all that? Might be good to see how complicated the geometry is.

As @kwando said, it’s better to subdivide the scene in several chunks so you can have some frustum culling. 3 to 4 million triangles is a bit hardcore.
I guess your maps are grid based so it should be pretty simple to “cut” the area in sub areas.
Then some LOD could help too…
In short I wouldn’t recommend using brute force batching for this kind of scene

I love how this looks so far.
I am working on an android game and I have the same issue with batching. So I would love to hear more on this topic.
What I currently do is to not batch at all and let frustum culling do its trick.
Obviously this can have its downside as well, especially if you have lots of controls in the scene.

That is one good looking test, slap in a few monsters and some fireballs and I’d play it

how do u ppl do such nice scenes? all i have done is squares and circles

Yh, its annoying how good she is

Yeah, I’d also say since you don’t cull anymore you go to the other extreme, in effect you probably render 4-6 times as many polys as before and the switching time for the geometries becomes negligible. As nehon hinted, keep a few single geometries, best dividing by areas that are being looked at.

can you show us the statistics of that scnee? Also what kind of hardware are you running?

(Here it gets funny, intel hd cards & amd fusion chips can usually go up to several times the object count than a normal pxie card can (due to less overhead for draw calls). At the same time they entirly suck at more complex scenes as the simply have not enough power to do several million polygons…

<cite>@eraslt said:</cite> how do u ppl do such nice scenes? all i have done is squares and circles :( my game looks like this, go chop some cylinder trees, build box houses and slay sphere mobs :D

Or look for asset packs online.

Looks from the screenshots you are using SSAO… does that perhaps account for some of the performance hit? My experience is that it has a big impact…

@monkeychops, if I remember correctly the SSAO filter needs to render all visible objects at least one extra time, maybe two times. This is because the SSAO algorithm needs boh a depth map and a normal map in order to make it’s magic.

@monkeychops
Heh… nice call on the use of SSAO. Yes, the scene is using SSAO, though it is not the standard JME SSAO filter and only requires one extra pass as I believe that the depth map is being rendered in all cases. This has minimal performance increase if I disable it.

@kwando
Dividing the scene up did the trick… I completely spaced frustum culling while I was barreling through the idea.

@abies
Here is a screen of the wireframe… 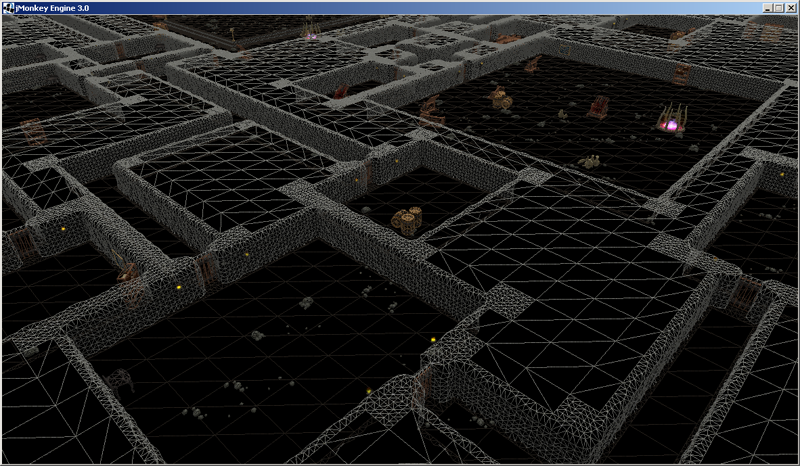 I haven’t spent any time optimizing the models yet, so this will probably help as well. I think the tiles sets require a total of 18 models… and a LOT of rotation lol… so optimizing shouldn’t take much time. I’ll try that out next to see what kind of help it is.

@EmpirePhoenix
I’m running this on an older gforce card… this is definitely playing into the lack of performance, I just wasn’t expecting the results I was getting (mostly due to not considering culling).

Oddly enough… the test wasn’t really for the sake of playing around with batching. I did the whole thing to test out the particle emitter being used to generate all torches as a single emitter. And then the OCD kicked in >.<

This worked out pretty well. To generate about 150+ torches, it required a single emitter with about 3000 particles to keep the dispersion/effect looking nice.

Any chance of sharing the piece of code responsible for generating wall geometry? They look really cool…

<cite>@abies said:</cite> Any chance of sharing the piece of code responsible for generating wall geometry? They look really cool...

The tiles were put together in Blender… they could be generated via code easily enough, I would imagine though. If you’re referring the to code for laying out the tiles… generating halls, rooms, etc, etc… I’d be more than happy to put together the project into a zip file and share it with others. It still needs a little bit of cleanup, as I threw it together in like a day or two and it still has some leftover code from first attempts.

I’ll put together a thread for generating the tiles in Blender as well… as it takes no time what so ever to make a tile set that way.

For generating the tiles via code… here is how I would go about it:

Assuming the the tiles are in a 2x2x2 unit cube. You can use scaling past this…

Anyways… this is how I would generate the tiles programatically… though, this will only work simple tile sets, like caves, castle walls… anything basically squarish… ish…

Did you try geometry batch factory? I believe it does directly what you were doing by copying the mesh out of the batch node?

For the torches I’d batch them up as well - then sections can be culled if not needed.

<cite>@zarch said:</cite> Did you try geometry batch factory? I believe it does directly what you were doing by copying the mesh out of the batch node?

For the torches I’d batch them up as well - then sections can be culled if not needed.

I’ve had some odd results with GeometryBatchFactory… though, I’ll give it a go again and see how it does.

I’ll also give the multiple-emitter thing a go and see if there is a difference in performance.

I’m anxious for deferred lighting as well. Lighting makes a world of difference for sure. For now, I think I’ll work with a set number of point lights and move them to new locations based on the camera. At least I can get some idea of what the lighting would look like this way.