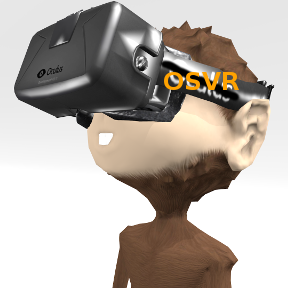 It’s been a long time coming, but I finally have come so far as to be able to commit an initial version of a native OSVR integration.
It’s very basic so far, only extended mode, and hard-coded distortion due to that. More features will be added in the coming weeks, and hopefully direct rendering too.
In parallel I’m working on the stand-alone JNI project (this is where most of the work has been put, by far).

Why would anyone be interested in this when OSVR can be used in jMonkeyVR (which is also way more feature-rich) via the Steam plugin?

I can think of two scenarios:

Woah great!!! My inner monkey is running in circles, jumping up and down and wagging its tail! :chimpanzee_closedlaugh:

Another major reason is Linux / Mac support. Neither Oculus SDK nor SteamVR support Linux or Mac.

Thanks for sharing this – I use Linux and I was planning to get an oculus soon but after reading that I’ll need to rethink it.

Aha. Well, I don’t think there are any binaries for Linux or MaxOS yet, but it being open source makes it of course easier for someone to do it by themselves.

Isn’t the game developer responsible for building the binaries and then distributing it with the game?

I meant server side binaries. There are pre-built windows runtime binaries which make it a whole lot easier for end-users.

I’ve updated the libraries and fixed some JNI issues. I’ve also done some refactoring of the project and prepared the use of distortion meshes (currently using a shader). I hope to be able to use the same for my cardboard library.
I also created an examples repo showing some jme stuff. I haven’t been able to look much into direct mode as it was more comprehensive than I had expected. There’ll be quite a lot more JNI to do first.

Version 0.5 is here.
Replaced the PostFilter distortion with a distortion mesh instead. Show improve framerate.
“Proper” extended mode support by extracting HMD size and positioning the window accordingly (will override resolution in the settings)
Fixed so that GUI is now shown in both viewports(nothing fancy though)