So after I talk with @jayfella on discord earlier today, I’ve decided to maybe be the website artist/designer (Hopefully I succeed).
I’ve only worked on this for a few hours now, but I’m going to share some pics of what I’ve got and the changes I made. 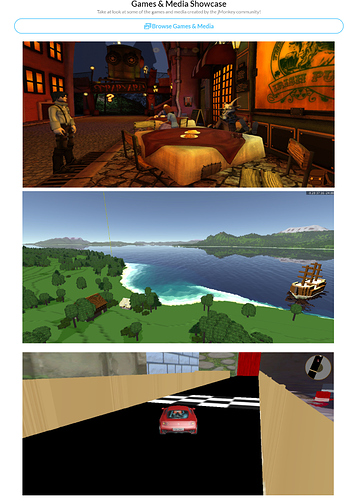 So, these are a few ideas I had. Of course a few I didn’t change because I felt that they were already looking very professional.
If you want to add/change something, let me know what part it is and I’ll work on it some more and again, these are just ideas. A lot of work probably needed.
So let me know what you all think.

Looking good! Personally I prefer the homepage version without icons, although that’s just personal preference. If icons are used, however, a consistent style/coloring would be preferable, especially a modern monochrome styling.

dont get me wrong, but about the icons, the more professional looking might be having “same theme not-pixelated ones”

its not so easy to create professional icons.

by same theme i mean for example like bootstrap have:

about theme - in your example they have much different tcheme, like each would be from different world

would need use same kind of style.

about pixelated - you would need make them in higher resolution.

im not sure from what game is first screenshot, second is fine, and last one, i know its yours, but its not looking very well for presentation

i would rather use car from store that Jayfella used. There are anyway so many good Monthly screenshots to use and idk why noone give them there. Look all monthly topics

Anyway for now there are games listed, fact is there could be just screenshots too.

about 5. i thought there was discussion already, and was told to not give something listed.

I’ll say right off the bat that unfortunately these changes aren’t really what I’m looking for, but I’ll try to explain why.

Whilst I do welcome contributions, it also needs to be from a professional in their field. It’s not something you can pick up over the course of a few weeks.

Those people usually have a portfolio, live websites to view, and when presented with a preview of proposed changes it would be very clear that they have a distinct flair for design.

As an indication, the last graphic designer I contracted charged me $600 for a single PSD and couldn’t start for 3 weeks. I’ve worked with this guy for years. That was cheap and fast.

To me at least - it is very clear to see the distinction between somebody that is willing to “have a go” and somebody that does this day in, day out as a professional, and I’m really looking for the latter to add an open source project to their portfolio.

Either way I’m very grateful that you and others are willing to put themselves out there and try. Art is personal. And I would urge any amateur of any field to take that rejection as fuel to become better at whatever it is you do. I would have nothing but a massive grin on my face and a brain full of pride when I say the words “boy was I wrong about you!”.

Well, its my first try, and I’ll keep trying to make it all better.
I don’t want to go “overboard” first try and start changing everything, but make my way up to something professional.
So thanks for your opinion.

I guess I’ll be doing a brand new design for the site. Would you agree with us having a “solutions” section like Unity? Because something about the engine is you can put the jME Context in a swing window, and you can really do whatever you want with Swing.
So maybe like “jME for Games”, "jME for Design, “jME for Films”?
I know examples of people using jME for the latter 2 anyways, so I thought maybe try it.

I mean I’m not against it, but I’m not sure those situations are common enough to warrant sections. I could be wrong.

Ok, I suggested because I know for example @danielp is using jME for MyWorld, which is not a game, rather it would be “jME for design”
And by advertising that jME can be used for more than simply games would probably help attract more attention to us.

Well, MyWorld is a social virtual world/MMO platform so I’d still place it in the “games” category. What are you referring to as “design”?

@danielp,by “games” at least in today’s terminology typically refers to some game that a bunch of lazy teenagers who have no life at all are going to get addicted to.
MyWorld sounds like something a lot better than that, so I never placed it in games category.
By design I mean something kinda like this. Architecture, Engineering & Construction | Unity And I thought MyWorld was kinda similar.

You certainly could use it for something like that, although the primary focus is on social virtual worlds & game dev.

Hmm, simply never looked at MyWorld as a way of making games.
But all in all, MyWorld wouldn’t be an example in your opinion of software (not game) built on jME?

Oh, it’s very much intended as a tool for making games - but it does more too. It’s not a one-trick pony.

That’s true - it’s definitely a software platform built on jME that is not a game itself.

Not too related to topic, but kinda sounds like a game engine in and of itself, so what are the finer details?
Sounds cool by itself.

I’d call it a “platform” although I suppose “engine” is also technically accurate. Essentially, you set up and run the MyWorld server cluster, your users install the client, and developing your game is as easy as dropping your content into the running world. Game objects are given behavior via either Java plugins (server-side and/or client-side) or our in-house scripting language, Chipmunk (dynamically typed w/first-class functions, objects & polymorphism, exceptions, etc.). All your content is fully managed - loaded on-demand and auto-updated. Full network support for real-time games is in the works also, so you can easily mix FPS elements into your MMO.

The perk for developers is that all of the low-level programming is handled for you, and the perk for users is that all games developed with MyWorld run on the same client, so there’s no need to install more than once.

So its like the “Unity Editor” built for jME technically or something?

No, it’s the end platform in and of itself. By way of analogy, it’s the Unity editor, player, & a full MMO server system all in one. Editing support is built-in, but it’s also the same software you’d use for playing games built with it.

Neat, I’ve read the blog post a few times already trying to get a hang on it. About Chipmunk, is it modelled after another scripting language or is it completely custom?