OpenGL ES 3.0 and newer on android

Thank you greatly @joliver82 for your hard work and contribution to the android side of jME.
I am a huge Android fan and have a few apps out on the play store.

I however have one question to you, what is your development cycle for android apps?
In other words how do you develop? Do you use jMonkeyPlatform, gradle or android studio?

Any feedback would be appreciated.
Thanks

Sadly my development cycle for jme3 based android apps is unconfortable as hell.

As I started with really old versions of jme3 (alpha2) and my project was not defined only for android, I’m using jmonkey sdk + a slightly modified android studio project from GitHub - noncom/jme-android-example

I have NBandroid installed and enabled android build so the mobile path is created. I used that as base for the project I linked (adding symbolic links for libraries, code, assets and so).

Probably there are plenty of better options, like just using the linked project or any other similar as starting point for your development but if using android studio or any other IDE you’ll loose the functionality jmonkey SDK has…

Not still. I’m adding stuff day by day and now I’m focused on getting shadows working 100% which is taking me more time than expected. It’s a complex topic for me

Not an android developer, but hopefully this might be helpful, I was able to create my ever first android hello world app in JME easily using this Gradle template.

This was a good opportunity for me to learn and test android using above gradle template. I locally compiled jdk-11 branch with Java 8 and created a hello world (blue cube) example apk and I was able to run it on my phone with android 4.0.3 successfully. I used following tutorial to install android sdk on linux (No need to install Android Studio at all) : https://linoxide.com/linux-how-to/install-android-sdk-manager-ubuntu/ Then I set sdk path in https://github.com/aegroto/JMEAndroidTempla…

After build it generates two apks, one inside debug directory an one in the release directory. The debug one can be easily installed on smartphone, but I guess the release one needs to be signed with Java Keystore which unfortunately I couldn’t figure it how.

Well my approach is a bit different.
I am also using the jMonkeyEngine SDK except the difference is I actually build android using the old sdk ant build as documented in the wiki.

I have to make my own build of the SDK because in order for the NBAndroid plugin to work in the jME sdk you need version 8.1 of netbeans.

After that I also need an old version of Android SDK manager but I install the latest versions of android platform tools and sdk tools.
I use this version: https://dl.google.com/android/installer_r24.4.1-windows.exe?hl=id

Then it is a matter of setting up my custom jME SDK to point to that android sdk.

So far this works for me very good and has been for years now.

Hope it helps a bit if you want to go into that route.

I can’t wait to see the shadow work you are doing.
If you want I can also test the code by creating some sample test projects for the test cases.

I could have used the gradle scripts from the android studio project I used as reference instead of fully install android studio but I think for my use case it’s better to have it, specially if you develop other android apps not jme based and/or to be able to debug android apps more or less easily.

On the other hand, it’s a good manual

It’s a good aproach. I didn’t realize the issue with nbandroid was that newest jmonkey sdk is based on a newer netbeans release. Anyway, I would prefer to have NBandroid updated but it seems that the developer stoped mantaining it

There’s a project called nbandroid-v2 (GitHub - NBANDROIDTEAM/NBANDROID-V2: Netbeans Android support plugin) that I’ve not tried still but seems to be less stable / finished than original nbandroid was in its time. Have any of you had time to check it?

Hi, hopefully you can help me with this…

I’m calling some methods of the GLES31 class (https://developer.android.com/reference/android/opengl/GLES31) but I cannot get it to compile:

The build.gradle is the default of jme3:

The "compileOnly ‘android:android’ is supposed to get the android dependencies but it’s failing for this class.

This class was included in API level 21, so maybe I should add something to the gradle file that I’m not aware of…

There are quite a few more gradle settings to configure. Not sure if you’re aware since you didn’t specify them in your post.

Thanks for your comment @jayfella but it’s the whole build.gradle file. What I’m trying to compile is the jme3-android library, not an application, so all other settings related to android are not accesible :

I could try to change it from regular java to android library (apply plugin: ‘com.android.library’) and setting all stuff there but I think there should be other method.

OK, I found out… it’s the library at /jmonkeyengine/lib/android.jar the one having the android classes. Just updating it to a newer version including GLES31 and GLES32 will suffice

Sorry, I missed the part of your comment about properly signing the apk. I use a small shell script as follows:

I’m working trying to get shadows to android gles3 but I’m facing a weird issue, depending on the device I’m getting the shadows rendered or just overriding the scene in grey: 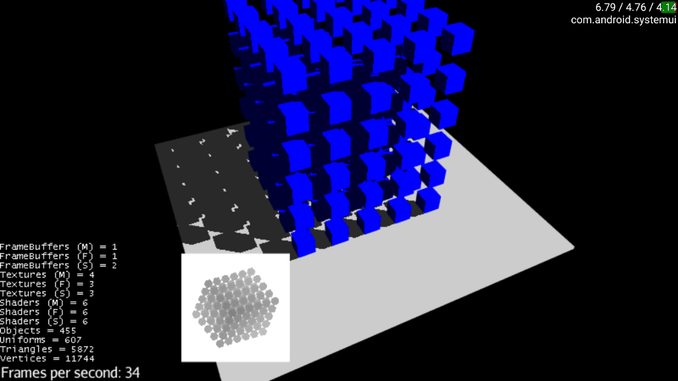 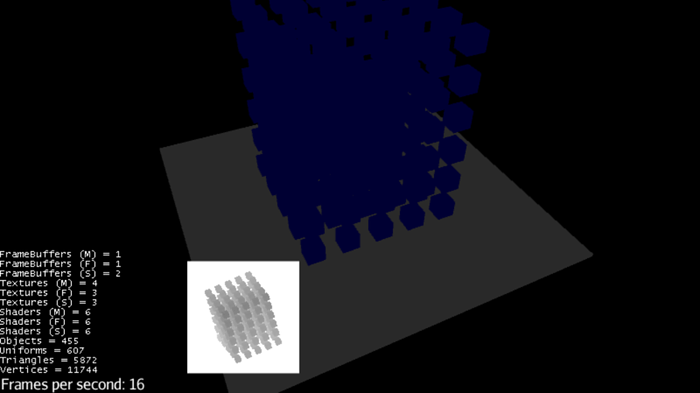 And I don’t understand why. The depth map is properly generated in all devices tested and I’ve simplified the rendering by creating a new material based on the unshaded.j3md but instead of using the default PostShadow.frag I’m using a simplified version that’s just rendering depth over the scene:

Everything is defined to use GLSL300 ( #version 300 es) added to the header dynamically to the shader by new jme code I added.

It’s been one week focused on shadows and finally I got them working rendering on both GLES2.0 and GLES3.0: 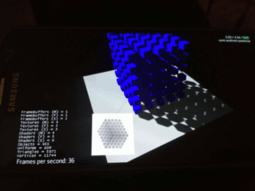 I’ve tested it on all my devices with good results. It would be nice if you have time to test it and give me some feedback

I hope you have success with PBR too.

btw, it is recommended to use https://imgur.com/ to upload your screenshots, then you won’t have a limit on image size.

I am busy testing you code but when I enable the DirectionalLightShadowFilter I get the following error. As a side note I am using the “Common/MatDefs/Light/Lighting.j3md” material on a box.

Thanks for the feedback. I forgot to specify that I was working with shadow rederers not filters

Just in case it was relevant, could you tell me the device you’re using?