fine tuning is something like seeing the port but not beeing able to reach it.

Whatever here’s the second beta version of pirateHell: “ye wanna be a pirate?”

So what do I want from you, my fellow monkeys?
At first: have fun. If you’re not having fun, please complain (if you have fun, please tell me, too^^).

Then please tell me what issues you’ve found.

@normen: I’ve added an option for the axis inversion in the gamepad config popup. Can you please test it?

So to get you guys in the mood while the game is loading: some new screens.

edit: Oh and please be patient at the intro sequence. There’s a control that goes nuts when you press a button before the scene has finished (it’s an high priority issue on my list)

You can reuse your old savegame. Just make sure to save the save.bin file (the game creates this one next to the pirateHell.jar)

Looking good. I hope I have time to play it.

re: the joysticks, I think I’m still looking for someone to provide me the proper mappings for the xbox style sticks that are all wonky. Then the default joystick support should work “out of the box”

Well it looks quite nice so far, however I’m stuck at the beginning of the tutorial mission. How can I close the initial dialog? I literally tried every key on the keyboard and the mouse, however i cannot continue.

(Maybe of relevance, i only have ~780 pixel height, is a button clipped or similar?
Also i noticed, that while i can start the game with 1024x786 resolution, all menues are somewhat crippled, you may want to filter out to small resolutions?

Hi, Just gave it a whirl, looks like all those years playing “Sid Meyers Pirates” paid off

For controller I had to dig out my old PS1 usb adapter and PS1 analog controller !!! but it worked fine.

As for the game, thoroughly enjoyable!

Issues: Once I defeated the Knight (mission 5 chapter 1) If I even return to the harbor I cannot see any missions beyond the 5 in Chapter 1, so I have to re-play that level and keep selecting “Continue” in order to play further missions, if I return to harbor I need to repeat. Am I missing something?

Also: Seemed a bit choppy frame-rate wise when the way-points were on the screen to follow.
Also may I pick on grammar/spelling?

Other that that awesome, great graphics too!

@radanz said: - On the brothel's description I think you should use the word "lose" instead of "loose"

I suppose that depends on whether they are telling you that you will “lose” your money or they are talking about “loose” women.

(I haven’t played the game so I don’t know.)

@pspeed said: I suppose that depends on whether they are telling you that you will "lose" your money or they are talking about "loose" women. :) (I haven't played the game so I don't know.)

@radanz said: Heheh, should've expected that one ;) could be the reason... wording is "if you win or loose", in the context of missions so I assumed in that context it should be "lose".... but then maybe we're talking pirate here and I'm in the wrong too :P

No, you are right. I just thought the brothel connection was kind of funny.

@Empire Phoenix: Can you give me a screenshot with the problem?

@radanz: ha, you’ve found a glitch.^^ The beta only provides the first chapter and I forgot to check this after defeating the first boss. Should be an easy fix. However feel free to sneak into the other missions.^^

Thanks for the grammar correction. I’ll fix that immediately.

@pspeed: no, he’s right. It’s about losing a mission. the context is: the brothel will only generate money when you win or lose/loose (damn…) a mission. If you cancel it via the pause screen the pirates will be angry and demand the money the whores gathered (or something like that. It’s just a fix so that no one can start und immediately cancel a mission to gather free gold)

And about the mapping. Me and my xbox controller will take care of that.

I had issues to configure the keyboard buttons. I click on the action to configure, it says “listening to input” or somthing like that, a widow apprear saying “press a key to turn left” (i was configuring turn left). There no matter what i press nothing happens., I still can click on cancel, but if i do i’m stuck on the previous screen and have to stop and start the game again.

Strangely, mission 2 is an instant win. I have “let’s see if this map…” then “that was a close one…” then “Victory”. I switched to the harbor between mission 1 and 2

Mission 3 : i like the concept of escorting missions, for some reason though, on of the ship got stuck and they got separated…that’s kinda hard to follow. Also the popping of the enemy boats is quite strange, they can pop just in front of you next to the boat to protect. They should come from outside of the screen,

Then my kid woke up from her nap, so i had to stop, I’ll continue later

Very nice work so far, the graphics are just awesome, adn the game is very fun to play! 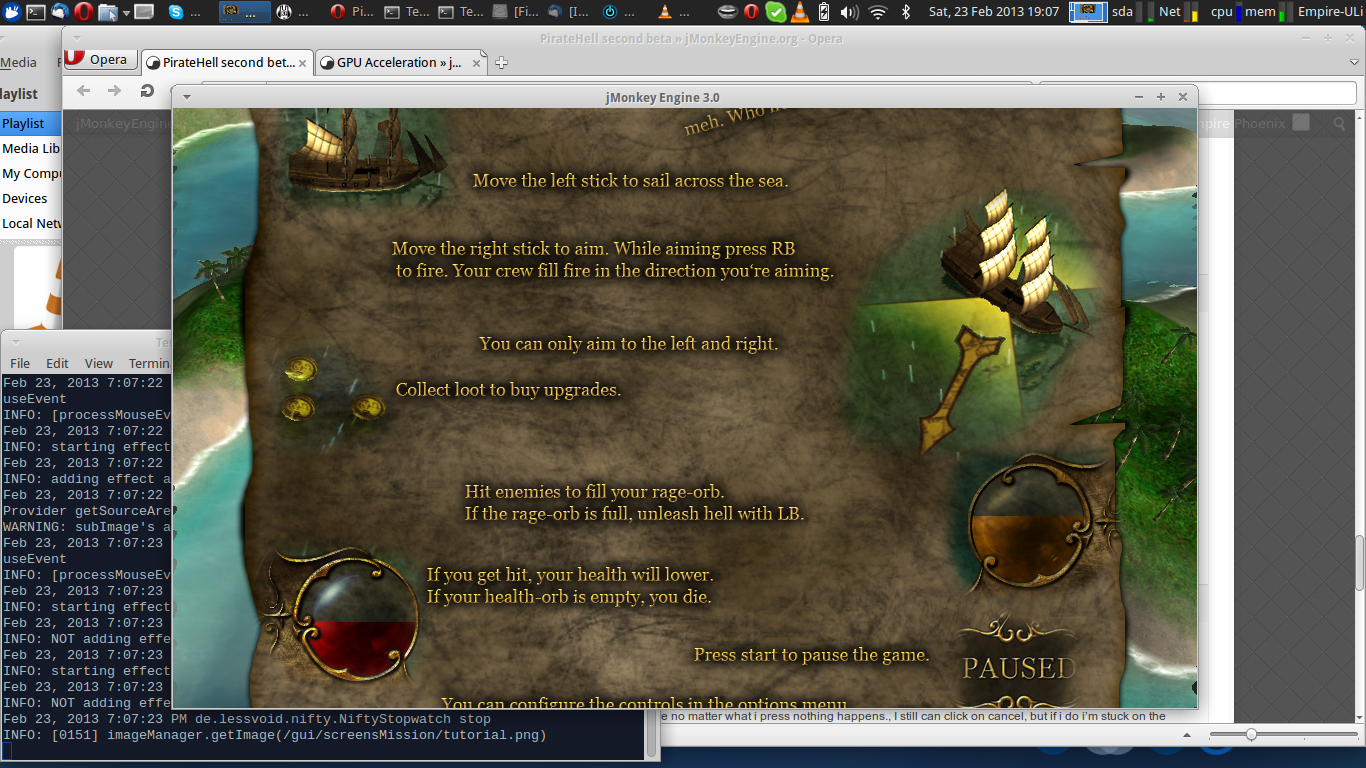 @All: New version with several fixes is up.

will try it on ym computer later

Is the GUI a nifty one? If so you can check the screen resolution in simpleInit and if its too low you can set an option in nifty to automatically scale it.

Basically you give nifty a resolution to pretend the screen is it, it draws the gui in this res and transforms it to the screen. (I’m not sure the exact mechanic). so if cam.getHeight()< blah then nifty.setScreenBlah

@zarch: Ha perfect. Just what I need. Only problem is that I have issues to switch from nifty 3.0 to the new version. Somehow it doesn’t listen to my element controllers.

Sorry, can’t help you with that except to say that all my events are working fine. (I don’t use element controllers though, just screen controllers and event bus listeners).