Hacked this together at the last hackathon at Facebook.  Using jME. 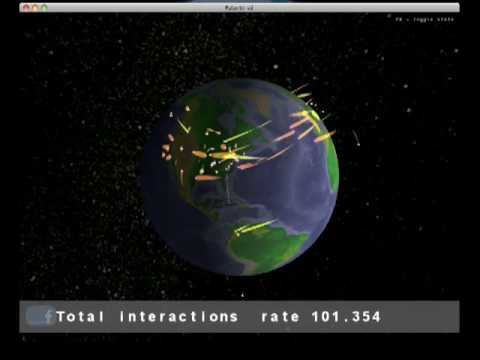 I'd love to be able to use the framework to show edits going in semi-real time for OpenStreetMap.org. Can you release the globe code?

Thats awesome! You did a really nice job on that. I like the corona of the sun.

Congrats, very good job. I like the sun too

Really nice… was all that data really real-time?

Really nice.. was all that data really real-time?

Really nice.. was all that data really real-time?

its very interesting to visualize the communication paths around the world

i would like to see a time-lapse view of a whole day, to see how the hour of the day influences the activity in different continents.

At the bottom click "About".  It's on the feed, in the middle.  The same video, but less quality.

If you have ideas that you think would be cool, you can let me know.  I've got lots of ideas myself, but can't tell people yet   8) 8)

Your geo-data visualization framework could be used for many more things than facebook data.

Dude, that was awesome!

I agree! it is awesome… so do they keep the data, or just stream it to you and lose it?