Right settings in Blender to properly export? [And fracturing!]

I got this strange bug that makes my models made in Blender (only the complex ones, simple box seem to work properly) missing some faces. After some reading and testing I came to conclusion that some normals are flipped but the funny thing is that:

So how to properly export models so that I can write down settings and never bother again?

P.S. I also had trouble with black models at some point but it seemed to be Blender default black ambient color. After changing it to grey this works fine - would be nice to include this information in tutorials though - took me some time to google this out.

Did you looked at the wiki ? There is an entire section on how to work with blender.
Also, bether to fix the normals before importing into sdk. If its too complex to fix manually, try some software like MeshLab.

I did click “recalculate normals” in Blender if that’s what You mean. Also have checked “write normals” while exporting. Not sure about Y and Z directions.

I did look this. Nothing about normals and strange effects I got.

You will need to check face by face to do the “flip normals” in those are wrong.

Ok, this is exactly opposite to what I’m looking for. Is there a way to automate exporting-importing process?

I mean jMonkey is a 3d engine so it has to have some dedicated way of creating assets right? Don’t tell me that such hassle (checking every face separately or slipping assets through several other apps to make them work etc.) is natural… It’s sick…

Having a proper method when creating the mesh helps. A good modeler doesn’t end up with faces pointing in all kinds of directions in the first place.

If you edit a model that has been imported as j3o and update the original model (i.e. press save in Blender) the SDK asks you if you want to update the mesh in the j3o file.

See this for some tips on modeling, import etc. 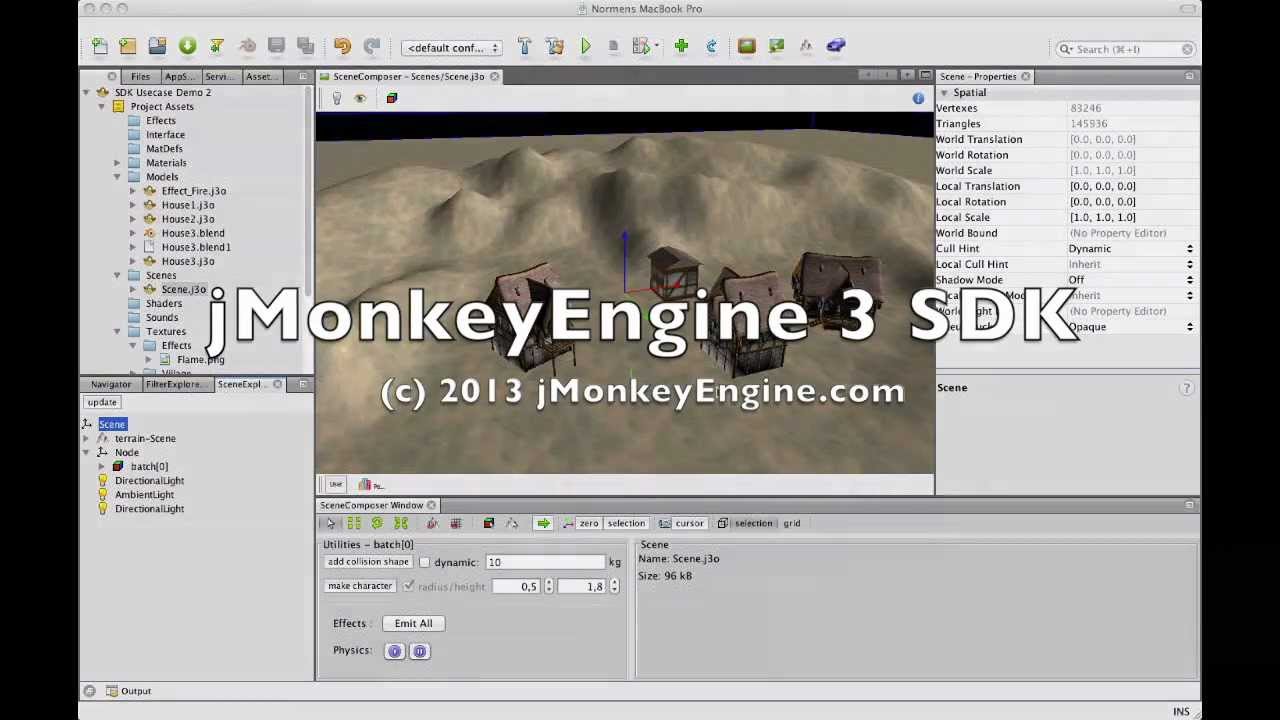 I mean jMonkey is a 3d engine so it has to have some dedicated way of creating assets right?

To be honest in the beginning I hoped for completely avoiding jMonkey SDK (I work in JetBrains IDEA anyway - wouldn’t trade this for anything else). But somewhere in Your tutorials I read something about .obj being good only for testing and .j3o being the only REALLY SUPPORTED (like end-user production supported) format so I started using jMe SDK for exporting. It generally works well except for some strange cases when models look like they have dark-grey material right after import (disclaimer - I didn’t make such material) or they deform (which looks like triangulation issue - jMonkey seems to dislike quad+ polygons that Blender on the contrary loves) or they loose faces (which I have absolutely no idea what caused).

As for creating good model… Well literally every high-poly model will have faces pointing in every possible direction. I would even take the bet that no two faces has exact same direction in good detailed model (and Yes, I know high-poly is good only for static stuff).

In the end what bothers me is not having an exact rule of “what goes wrong in what situation” so sometimes I have no idea which thing I forgot.

In the end: What is THE BEST (safest, issue-less, simplest) way of placing models in my application?

And what parameters in Blender I need to take care of?

The thing with triangles is that all video card will use triangles internally, so any game engines/export use it pre-rendered.
You can use any import process, I use blender → j3o almost every time, I just dont use it when I have animations, if you read in the wiki, you will see what is supported and what is not supported in blender direct import, and when you need to use obj/ogre.
What normen said about better models is that your models probably has lost vertices outside the model or worse problems, if you build an good model, you will not have this kind of problem, I mean, the problem in your model is not the number of faces or where its pointing, but common problem with modeling.

[quote=“wagfeliz, post:9, topic:33281, full:true”]
The thing with triangles is that all video card will use triangles internally, so any game engines/export use it pre-rendered.
You can use any import process, I use blender → j3o almost every time[/quote]
You mean:

I just dont use it when I have animations.

What You use in that cases instead?

if you read in the wiki, you will see what is supported and what is not supported in blender direct import, and when you need to use obj/ogre.

Actually WIKI tutorials gave me the fake impression that everything I mentioned above is 100% supported. But all those tutorials in wiki also seem to be outdated (some syntax changed from the time WIKI tutorials were created and they are surely not meant for beginners).

How can I loose vertice outside the model? I’d have to literally drag some vertex inside-out through some backface of the model. That thing actually happen to people? Would that explain loosing faces in random places (like in my image B few posts above)? There are like few dozen lost faces there if You compare it to A and B (B being deformed because of triangulation which I got rid of now).

P.S. Can You tell me this second thing too (the one about deforming/cuting models inside application programmatically to have some kind of destruction modelling)?

http://wiki.jmonkeyengine.org/doku.php/jme3:external:blender :
Animations for jME3 have to be bone animations, simple object movement is supported by the blender importer, mesh deformation or other forms of animation are not supported.

So, if you use animations, export using ogre for example.

About the modelling, its very possible to have invalid vertices in blender if you delete neighbor vertices for example. This is not the only thing that can happens, you can have duplicate vertices, duplicate faces ( I had problems with this myself at the beginning ), and much other problems. Doing an good 3d modelling for games can be trick, the model cant have any problem with vertices/faces, and you need to care about the number of vertices/faces in order to have an good fps.

About how to deform / change meshs in Jm3, its possible, I have done it myself, there is a few examples here in the forum, also in the wiki, start with http://wiki.jmonkeyengine.org/doku.php/jme3:advanced:custom_meshes

By destruction modelling I thought of something like "cut the shape of model A in model B in position (X,Y,Z).

As for animations, You’re right - I didn’t read that part too carefully, my bad. Although I hoped animating Shoggoth - Wikipedia this guy would be possible. Looks like not really…

I dont know how the model or animation of Shoggoth is, but I can guarantee, with Jm3 anything is possible, actually since you have more freedom, you can do more stuff in Jm3 than the other game engines. I just wrote in my game some stuff that I could not have done in Unit for example.
About destruction, I am doing this in my current dev game myself, some proc generated asteroids, break in also proc generated peaces when the ship shot on it, I will release a demo after 1 month, if you want you can take a look.

If “destruction modelling” means fracturing, it’s definitely possible - After creating the Cubes plugin, I did another one for fracturing, but never decided to publish it since there wasn’t any free time and too much stuff with other projects around… 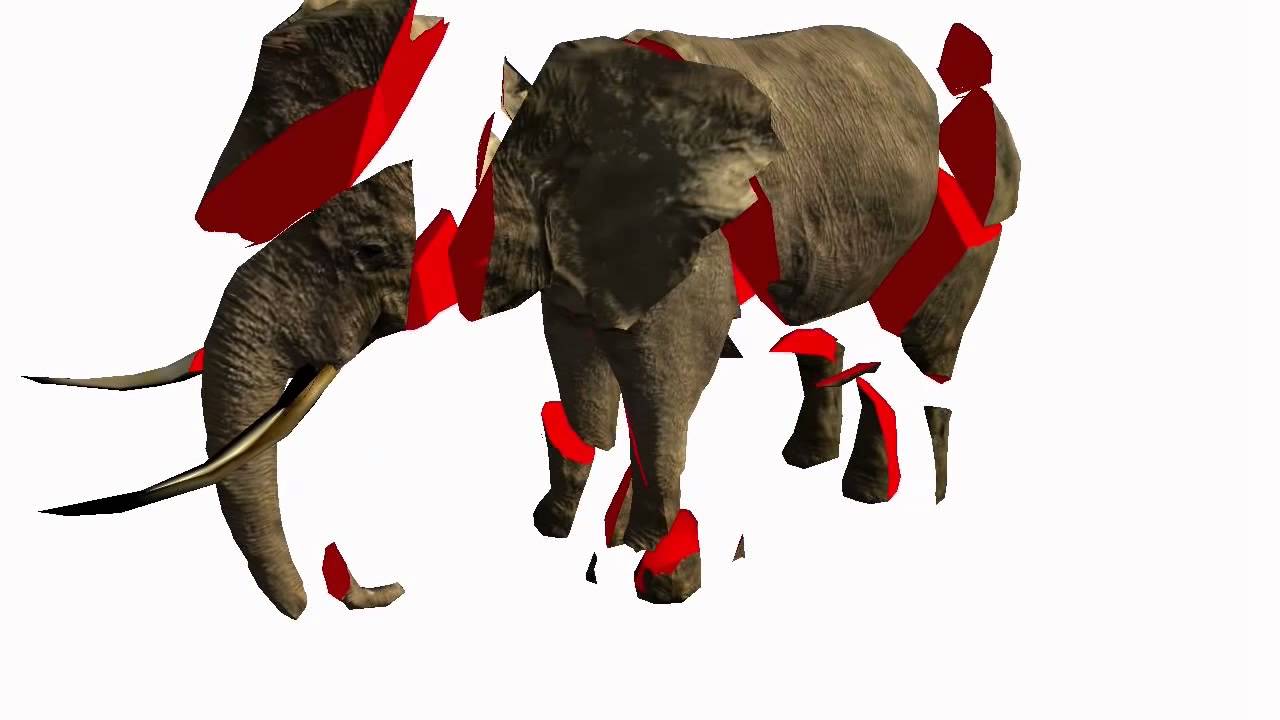 It’s based on Voronoi points, basically the points that seperate each part. You can then just traverse the models vertices (no “predestructed” meshes, the original solid model as it comes out of blender or w/e you’re using) and calculate new partmeshes, interpolate the UVs etc. etc. It’s doable, but it takes a fair portion of math and abstract thinking in terms of triangulation, plane orientations, 2D->3D etc.

destroflyer
Awesome, that’s exactly (to the letter) what I was talking about when I said “destruction model”. Can You point to some place where I can read more about this fracturing in jMe? Check some demos or something? Or at least some TestCase to reverse-engineer?

wagfeliz
I kinda hoped You’ll check the monster description. Shapeless, Amoeba-like, can generate any number of limbs/organs of any kind just right out of its goo-like body. Seems to me like deformation or won’t happen.

No, because there is no “fracturing in jme” site or demo. Otherwise I wouldn’t have wrote my code^^ And since I never published it, there’s no code available. The principle behind the whole thing are voronoi points, the wikipedia articles give a pretty good idea of how it works:

In mathematics, a Voronoi diagram is a partition of a plane into regions close to each of a given set of objects. In the simplest case, these objects are just finitely many points in the plane (called seeds, sites, or generators). For each seed there is a corresponding region consisting of all points of the plane closer to that seed than to any other. These regions are called Voronoi cells. The Voronoi diagram of a set of points is dual to its Delaunay triangulation. The Voronoi diagram is named...

I see what you said about your monster.
Anyway, the Voronoi algorithm @destroflyer showed is the same I am using with my asteroids.
Also, you may be able to use the same algorithm for your mosnter, since the basic of it is to generate meshes.
There is a lot of info in the internet about it, and its easy to understand it really.

Well math side, doesn’t seem too hard here. Just finding (try and error way if nothing else works) the points in 3d space that will split my model.

But what about the code? How can split model of any kind in jMonkey? Simplest case: I have a cube importet from Blender of size 1 in every dimension and I want to cut it in half:

Didt you find those anwsers in the http://wiki.jmonkeyengine.org/doku.php/jme3:advanced:custom_meshes ?
Just create the vertices/faces for the new object and add they to the scene.

I have a cube importet from Blender of size 1 in every dimension and I want to cut it in half:

Please read at least the introduction of the link I gave you - Splitting an object in half means you have two voronoi points, not four.

How do I refer to newly created objects, sinse they are not a whole now?

If this is a problem, please start with something simpler and don’t rush into some cool-looking destructable models application, but learn jme basics like meshes (and how to create custom ones, see wagfelizs link) first.

Sorry if I sound rude, but asking for code without understanding the basic principles behind the algorithms won’t help you. This is something a bit larger than a usual “code snippet” you can ask for in a forum - Really learning stuff doesn’t mean to play around with demos. You will have to do the math, sketches and researching by yourself if you really want to come up with something useful.