A new and improved second prototype out ,improved the weakspots of the previous one ,Hope you like it 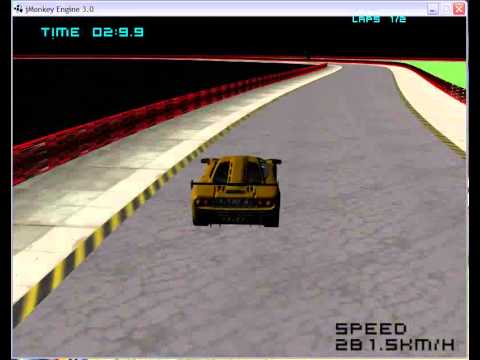 Right you are. Moved.

Nicely done @Rhymez , a lot of working parts. Looking at the car though, I feel like its current physics configuration looks more like that of an F1 car. Also every 3 seconds there’s some kind of low pitch boom sound in the background. What’s that supposed to be?

The speed at the hud not proportional to the real speed. It would be fun if You could record the video without lagging, I"ve heard that Jme is capable of recording to a video.

It doesn’t record sound though.

Well the thing with the boom sound is that i converted my original accelerate soune to mp3 format,so could not use it anymore and had it replaced by that sound ,didnt realise it was this bad .As with the car ,it is a sports car ,tho i made the front wheels rest length higher the back wheels .As for the lagging part , il try and turn on game mode to clear most of the little 1.5gb ram i have the next time i make a recording.