Minie implements debug visualization differently from jme3-bullet. For one thing, it has a debug-mesh cache, so a single debug Mesh might be shared between multiple collision objects.

I can re-implement the getDebugShape() and getDebugMesh() methods for compatibility. Or you can use the dummy-object technique you described. Just be aware that the resulting meshes may be shared, so you should avoid modifying them.

Also, it will be nice to have a DebugShapeFactory.clearCache() method to empty the whole cache.

About a page worth of TODOs remain, including:

Adding this just in case

Provided it had a clean interface, this would make a nice add-on to Minie.

I think it’s best for features to be developed by someone who’ll actually use them. If you think you’d use this, perhaps you should develop it. If there’s anything you need, let me know.

Spending “quality time” with my app has convinced me that Minie v1.0 should provide access to Bullet’s automated convex decomposition algorithm: bullet3/Extras/ConvexDecomposition at master · bulletphysics/bullet3 · GitHub

Checkout VHACD, it does the same but better. You can see the comparison here Khaled Mamou's Blog: V-HACD 2.0 vs. HACD

There is one version that is included in the bullet source and one, more updated, that is released by the author, that i have implemented here GitHub - riccardobl/jme3-bullet-vhacd: This is a library that uses java bindings for Khaled Mamou's V-HACD to decompose concave meshes into hull-shapes in jmonkey engine.

I encountered difficulty running your tests, but I eventually got VHACD itself working in my game.

This is a “game changer”. Literally!

The main drawback of VHACD is the CPU time required to generate collision shapes. But I believe that, with Minie, most apps will be able to generate shapes in advance. Already I’m tempted to deprecate GImpactCollisionShape…

I encountered difficulty running your tests, but I eventually got VHACD itself working in my game.

What difficulties did you encounter exactly?

Fun with rigid-body physics. The objective of this game is to defend the fortress knock barrels into the swimming pool. 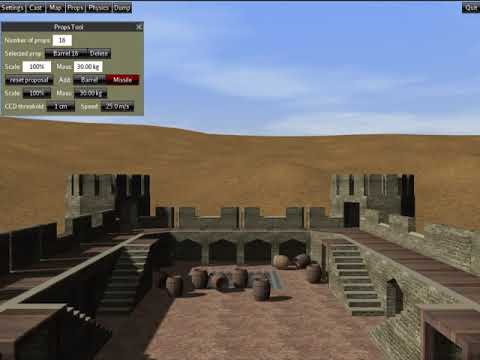 Both releases have V-HACD built in. There’s no demo for it yet. In case you want to try it, Minie’s interface is at CollisionShapeFactory.createVhacdShape().

Awesome! I tried v0.9.1against jME 3.3-alpha5 and it wasn’t working. Glad I’ll be able to keep going with Minie shortly.

i would love to see Minie as internal package part of JME, like jme-bullet-minie package

always working with each version of JME. i know something is already supported there, but would like see all

To incorporate Minie into JME, there are technical and administrative issues to be worked out, though doubtless they could be overcome.

I wouldn’t feel comfortable making such a decision myself. I would want an explicit go-ahead from a release manager. Currently @pspeed is, by default, the release manager for JME 3.3.

I want Minie to be in JME v4. I believe that proposal has been greenlighted: remove jme-bullet, jme-bullet-native, and jme-bullet-native-android · Issue #9 · tlf30/jme4 · GitHub However, it’s probably too early to begin integrating Minie code into the v4 repo.