I uploaded a video on how to create, build and run a JMonkey project with gradle if anyone wants to check it out 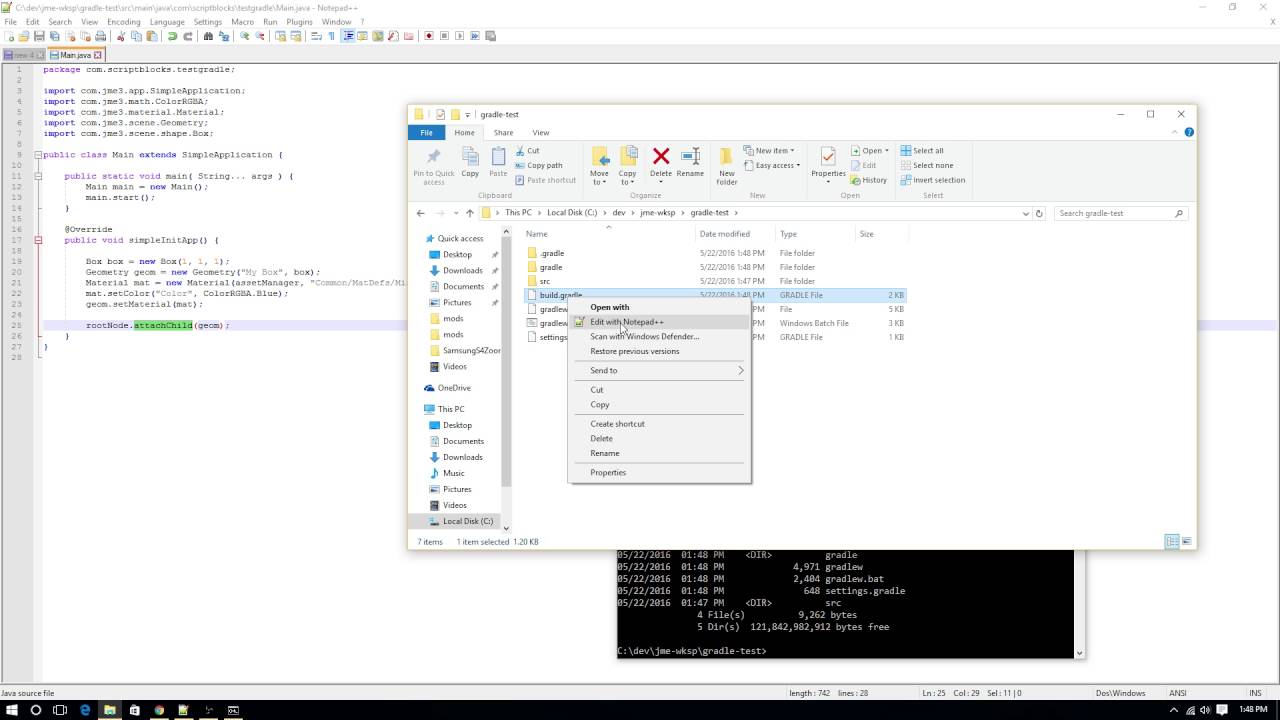 Thanks @gbluntzer. Was very helpful for me.

Single quotes and double quotes mean different things in gradle. As I recall, single quotes means a string literal… no variable substitution. Also, I think if you used single quotes for the dependencies with the range expansion then it wouldn’t expand the range. You used var substitution in yours but some folks also do:
“org.jmonkeyengine:jme3-core” + jmeVersion
…which I’m 99% sure wouldn’t work as:
‘org.jmonkeyengine:jme3-core’ + jmeVersion
…because the [3.1,) won’t get expanded.
…that could be superstition though.

jme3-core is the core library.
jme3-desktop is what you need to run on desktop (as opposed to mobile).

For most people, the next immediate step would be to have assets. Adding an assets folder that compiles to an assets.jar turns out to be pretty simple with some gradle tricks.

Gradle supports the idea of subprojects that have no actual project file. (ie: no build.gradle of their own).

That tells gradle about the assets subproject.

Now in your project’s dependencies include:
runtime project(’:assets’)

…to include the assets.jar file as a runtime dependency.

Now if you were to package up your application then it will also include the assets.jar file.

As per another thread, a full project example can be found here with assets support:

Thank you for watching it and for the feedback.

By the way, what does this notation actually mean?

By the way, what does this notation actually mean?

In short, it means anything greater than or equal to 3.1… in this case, the ‘latest’ by whatever logic latest is using to determine latest. (Unfortunately, more or less just string comparison.)

Gradle also supports 3.1.+ but then if you publish to a maven compatible repo then you screw up any maven builds that try to depend on you.

You could also use a custom pom generation in gradle, that when uploading resolves the actual version for that build, so that it stays compatible to the specifications.

I’m not sure I understand why one would want one build to behave differently than another.

And for Android, what changes should i make?

And for Android, what changes should i make?

This may be helpful for you.

thanks for the information, really useful

Rather that use the subproject why not just declare the assets folder as a resources folder?

The subproject approach seems to upset some IDEs (e.g. Intelij) whereas its happy with the resources approach (And delegating to gradle for the builds is much slower than letting Intelij handle it)

That could be the solution to my problem having to sync every now and then when intelliJ doesn’t know anything about the codebase anymore. And also I had delegate because of some problems enabled, I think

Edit: So thanks for sharing

Note that treating the assets directory as source resources has some down sides. Your mileage may vary as to how significant those downsides are… but…

For projects without many assets this shouldn’t matter. Anything over 20 mb or so, I suspect it will be unpleasant in the long run.

Perhaps what’s need to make the IDEs act more intelligently is a build.gradle in the assets folder?