I’ve just implemented a simple project including a geometry shader based wireframe rendering material for GLES (it also works also on desktop GL):

@sgold if you think it’s good enough to have it integrated in jme3 core to fix the debug shapes issue, tell me.

If there’s anyone needing something similar, just feel free to use it

I forgot to mention that this should work properly with instancing, skinning and morphing. If there’s anyone using any of those jme3 functionalities wanting to test it and give me feedback is much appreciated

Screen capture running on my phone:

EDIT: rework the post to reflect the current repositories properly

@sgold if you think it’s good enough to have it integrated in jme3 core to fix the debug shapes issue, tell me.

I’m not an Android developer, so I don’t feel qualified to judge your contribution.

OpenGL has a default wireframe mode, OpenGLES does not have a wireframe mode (POLYGONMODE), so this needs to be implemented with GLSL.

Yes, that’s the point here, the material I posted in the linked github project implements it using geometry shaders

Obviiously it’s mostly useless for desktop but if you want to use the exact same code in all your binaries either using openGL or openGLES, instead of having to check when to use one material (or flag) or the other, you can directly use this one

Well, I got some more spare time and I implemented also the barycentric coordinate approach for wireframe rendering, so, if using this technique instead, you can have wireframe on any openGLES release

It’s all detailed in the readme but… from left to right: Geometry shader approach, jME3 default wireframe mode (will render solid on android) and Barycentric coordinates approach: 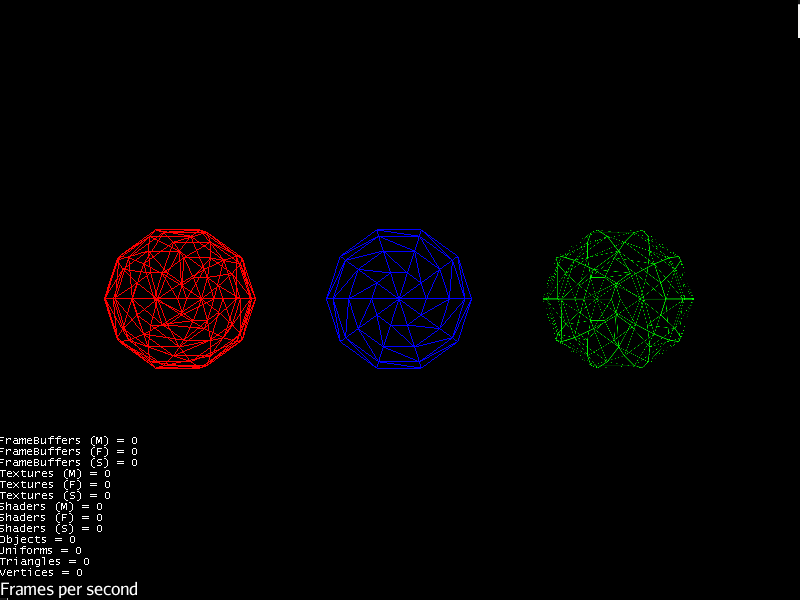 is it possible make them look more similar to default JME one? (backface culling or something to make less chaos draw?)

Yes, sure. Just by leaving face culling and depth test by default instead of overwriting it as it’s doing now

Adding screenshot with the change to mimic jME3’s behaviour 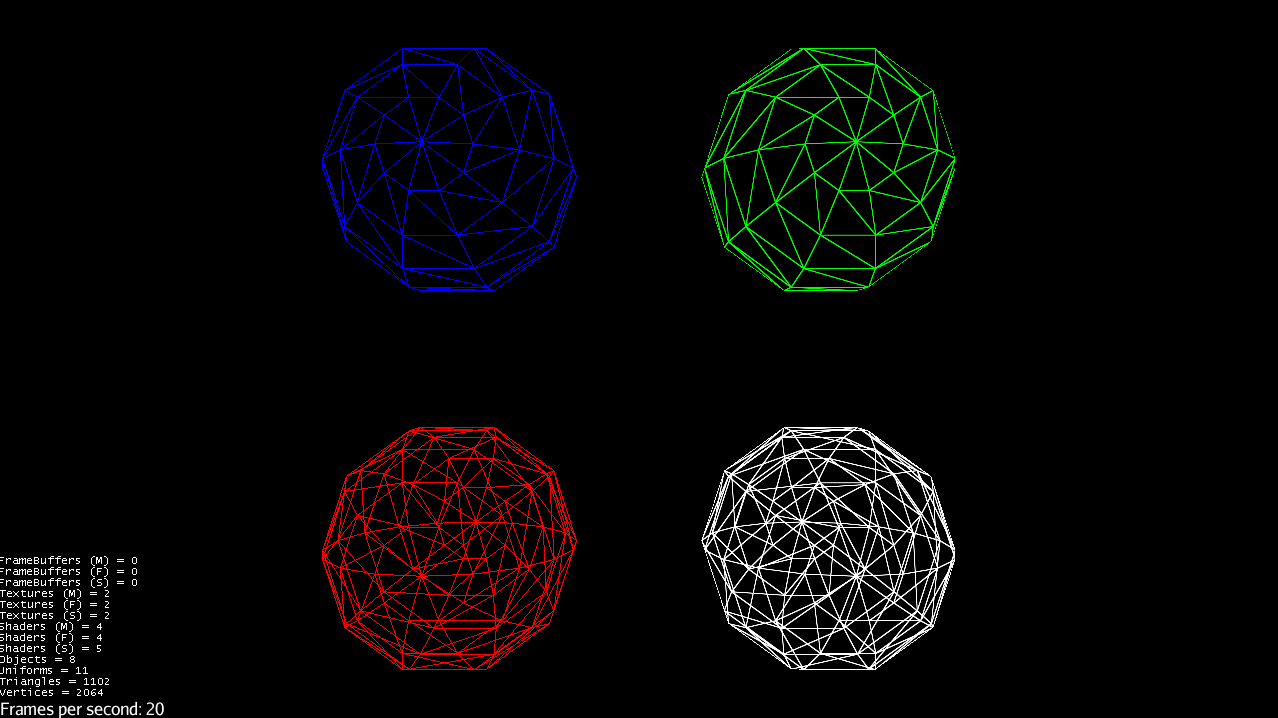 I’ve been having a look at how to integrate the wireframe I implemented with jme3 to solve issue 1345.

I’m using Heart’s library MyMesh.expand to have the mesh in the required state for barycentric, so I would need to add this to jme3 somehow. I’m not sure which would be the best class to add this. Maybe the mesh class itself as expandSelf() or other external helper class as it’s done in heart

. Also, @sgold are you OK with copying your code into jme? as it’s from your library…

Same for the method setting the bary coords, not sure if Mesh would be the class to add it or any other class.

Currently I’m using the normal buffer for bary coords, in this case when rendering wireframe normals are useless but maybe I should add a new buffer to the mesh for this instead. Not sure but I think normals are used or even overwritten when animating a mesh

In my opinion, the GLES wireframe renderer should be an add-on library for now and not become part of JMonkeyEngine, at least until it’s in widespread use. As an add-on library, there shouldn’t be any issue with it depending on the Heart library.

My reason for wanting to integrate it into jme is to properly support the physic debug shapes on android nowadays rendered solid. Probably it’s not a big issue for most people here…

And yes, for sure it could be kept as a library, in fact, if finally not included in any way, I may update the project as a library and add it to the store

Adding it to the Store sounds like a good plan.

At this time, I’m looking to reduce the amount of code maintained by the JMonkeyEngine “core team”. That includes (probably) cutting physics out entirely, which would of course include debug shapes.

Then physics will be removed? I thought you were adding minie as replacement of jme-bullet in the long term.

They will be separate projects… so that they can have their own lifecycle not linked to the glacial JME releases.

Minie is an add-on, not part of JMonkeyEngine. I don’t see that changing anytime soon.

oook, I see. So jme-bullet and minie will be projects fully independant of jme and they both could use my wireframe stuff to render the debug shapes if required. Then I’ll change this to be an addon library for jme

Thanks for your comments

The plan (as I understand it) is to move jme3-bullet and its related libraries to a new repository in the jMonkeyEngine-Contributions project, alongside jme3tools.navigation, BlenderLoader, and shaderblowlib. Unless someone volunteers to maintain it, it will then cease to be maintained.

Recent discussion of this transition can be found in the Suggestions for v3.4 Forum topic.

This will sound as a really noob question but I’ve never needed to do it… Where and how can I upload the library so it can be downloaded when added to the gradle dependencies?

The usual path is to create an open-source account at BinTray, create a Maven repo, create a package in the repo, create a version of the package, upload a POM and a JAR for the version, and then request that the package be linked to JCenter.

There are many potential pitfalls, so don’t be shy about asking for help.

If you use gradle there are also ways to automate the publishing process once you have the accounts setup. JME does it… but has a beast of a build. All of my published projects also do it.

SimMath may be the easiest example… though I’m still using an older gradle:

This file has been truncated. show original
2 Likes
next page →