In my game, I move platforms. These platforms have a RigidBodyControl attached in Kinematic mode. I am also attaching a second control that takes care of moving the space.

When a character is on the platform, he must accompany it.

To do this, I thought to apply the velocity of the platform to my character.

To know when my character is on the platform, I capture the collision with the implementation of the PhysicsCollisionListener listener.

The character accompanies the platform in movement, only here is my problem:

here is a video of the problem: 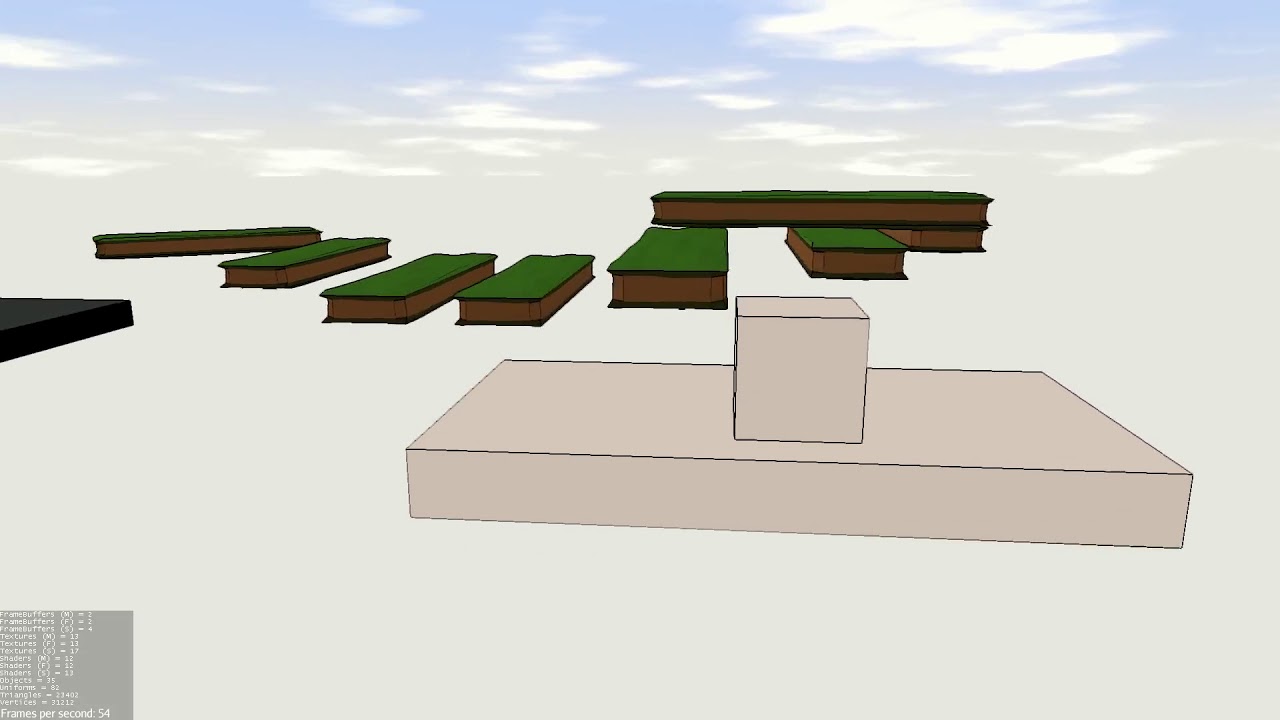 I think the problem comes from the difference in refresh between the Bullet engine and the frame rate per second of the JME3 controller’s update method, but I can not understand how I could fix that.

What do you think should be changed or configured?

Here’s how I move my space into the controller:

Here’s how I add my two vectors in the character:

Shouldn’t this be like an emergent properly of a high friction coefficient? At least that’s generally how it works in real life physics…

So I guess setFriction(something) should solve it.

Unfortunately, the friction has no influence because the platform is a RigidBody in Kinematic mode.

Can you please try with following settings.

This should update platform spatial position in sync with physic tick, i guess.

I think I have already tried this, but I do your test again tonight (Belgian time). I will post the result. Thank you. Thoced

It’s not supposed to influcence the platform, but the cube. Is the cube kinematic as well? Why are you using physics then?

Edit: Indeed it should in fact, work this way.

Edit: Indeed it should in fact, work this way.

That sounds like a problem with the character controls. Then again I guess the result may be too jittery for the camera without some unphysical hacking.

That sounds like a problem with the character controls.

I guess that is the predicted behavior for character controls

Most games simply make two physics spaces for on-the-train and off-the-train. Then you have to round off the edges of the transition. Theres many funny videos where that goes wrong in AAA engines, like a guy hanging on the car making the car have a bulge in it’s “real world” physics space etc. For a simple platform you should simply by able to put a physics object on it and it will move along but that won’t work when you modify the velocity directly (as its the only result of the physics). So n…

This seems to be a common problem. Shouldn’t there be an internal solution for this in Bullet engine !?

Well thats kind of the point - it’s not “internal” because its something you do differently from game to game.

I made the changes, my problem is solved in part.

First of all I have to tell you that I did not use BetterCharacteControl but a custom class derived from RigidBodyControl.

I was inspired by the code BetterCharacterControl but did not use it because each time I use it, my character seems to jump constantly. So I decided to make a custom class.

To go back to my platform problem, my first problem was that I did not consider the resulting velocity. Let me explain.

I initialized with each frame, the x and z fields of the velocity vector at 0. (I kept the y for gravity). I did not take into account the velocity results due to friction.

Now my character moves at the same time as the platform, I do not need to manually add the velocity of the platform, all done alone.

Only now, I have another problem.

I must add, at this velocity, a direction vector (walkdirection). As this vector is added to each frame, the velocity increases almost exponentially.

I have to find a way to cap velocity.

I try to get inspired by the code of BetterCharacterControl.

Thanks for your help.

I was inspired by the code BetterCharacterControl but did not use it because each time I use it, my character seems to jump constantly.

Do you mean vibrate wildly or does it actually move in up and down jump motion?

Sorry to answer so late

The body really jumps without stopping
As if he is bouncing