This is the code of MonkeyBrainsAppState.addAgent():

That isn’t the problem for the now. MonkeyBrainsAppState gets the reference to rootNode through setApp() method, if it makes that much of the problem, you can extend it and override setApp. All parameters in MonkeyBrainsAppState are protected, so the developers can change it if there is need. I will have in mind for this suggestion.

That isn’t the problem

Well, actually I had to fork MonkeyBrains just for deleting this line. I understand that putting the rootNode away from MonkeyBrains requires a huge refactoring, but that’s for the good of the library on the long run… at least I think so.

I am currently very busy with my work and research so I don’t have enough time to correct it all. Your (@pesegato) ideas were very helpful in refactoring MonkeyBrains. If you like I can give you access to github code so you can improve API without me. Post your github username, and I will add you as contributor.

On another note, I was thinking how to remove boilercode. As I don’t see how it is possible with MonkeyBrains, I am exploring the possibility for creating language on top MonkeyBrains or something similar. If you have idea for some next improvement, post it here.

My username is Pesegato also on github

Thanks! If you add me, this is what I’ll do:

This will obviously break the monkeybrains samples

On another note, I was thinking how to remove boilercode. As I don’t see how it is possible with MonkeyBrains, I am exploring the possibility for creating language on top MonkeyBrains or something similar.

What do you mean by that exactly? What kind of language would this be?

Glad to see more MonkeyBrains contributors coming on board

@erlend_sh I don’t have slightest idea how the code will look like. I am researching the programming paradigms to see there potential, as they need to be supportive of objective Java. For now I am inclining to functional programming like Clojure, but it is still too early to discuss it, so if anybody has idea how they want to code AI, please suggest it here.

Idea is there will be 2 supported MonkeyBrains framework like iOS Objective-C and Swift (I am now iOS developer), everything can be built with java code, but there will be support for that new language to make some things easier.

BTW @erlend_sh What is recommended Java version for working with jME?

@Tihomir, take a look to xtend (xtext), some of the goal is to remove (hide) boiler plate and to generate java code. Currently it’s only supported on Eclipse, maven, gradle, but a IDEA port is coming.

Back to more serious arguments: since I am a contributor of MonkeyBrains, I can speak openly about what I think are the problems of this lib.
The core concept is cool: agents, behaviour, teams, not to mention the steering behaviours.
Unfortunately, the lib makes several assumption about your game that may or may not fit the developer’s needs.
This is what I was referring above: split the non-AI related stuff on a separate package.
Until this step is finished, I doubt that a higher level language will alleviate the issue…

Nice, did not know a IDEA port is coming. Having it on my radar now

I’ve kind of wanted MonkeyBrains to become an AI framework that work and useful. But from my point of view, it’s not really well adapted to JME3 nor have good abstraction for an extensible AI framework yet… I kind of write my self a AI library long time before MonkeyBrains and I go back with it… Anyway, this is my opinion, as this thread said open for suggestion, and I can introduce my self a game developer not an AI expert or anything near that, to judge MonkeyBrains. I just know what I know, bare with me

I’ve also used Agent concept in a lot of my games written in Java, Java dialects and C-family languages.

In Java, I’ve implemented my framework with a leverage of Guava and RxJava, for extensive ultilities collection, composing of functions and routines (threads, actions, events …). So it’s not very pure Java but I also use this two libraries intensively anyway, I think it’s a good point use it for AI. The foremost abstraction of the framework is:

What I have learn from a mix background of game developing and software development research (tools for AI) is: making AI things more composable as possible to make it helpful!

-) I’d like the Container (scope and space) concept. Container instruct an overall Layout for Agents (alignment, movement, formation, rules)… Container may also introduce something like a Blackboard of information exposed for Agents within scope.
-) Layer is a Software managed concept, introduced to bring code generation and GUI creating into AI. Layer along with Container provide managed information (as Events, Data) for Agents to process in update loop. Layer is somewhat like Steering for movement, coporative Pathfinding, goal - decision making … which should be made to be able to “layering” one on top of another with mininum of interleaves.
-) Event, State, Data, Sampling are too generic and have a lot of library did excelent works defining them. I just wrap the library I want and use them with JME3.

That’s some thought on top of my brain right now. Hope this useful someway…

I must say @atomixnmc that I didn’t completely understood your explanation as I am AI programmer and not game programmer. A lot of stuff probably looks like they don’t belong there, like team. Team is collection for now and I agree with you for that, but it won’t be forever. The problem with this kind of agents are communication. In first-person shooter game, agents won’t know the position of each other, except we enable them to know the map, which I think is cheating, so the idea of team is communication group. Also expectation for team class is to become sort of group agent for real time strategies and to enable them to have group behaviors. I think some steering behaviors team as parameter.

Inventory has also been target, like it doesn’t belong to AI. I beg to differ. Steering behaviors has mass of agent to properly calculate velocity. Inventory is interface. If you don’t implement it and add it to agent, nothing will happen, but I think you should include mass of inventory in mass of agent. Without it you will have to override mass of agent… a lot of work for little benefits. Also inventory inside agent will update all cooldown of stuff in inventory that programmer think it should have cooldown. I hope I have defended my idea.

Agent is interface. Ok, it can be, but that way a lot of AI stuff can’t be implemented. I have made Agent generic so you can use that generic class for extending what ever you like. In MonkeyBrainsDemoGame Sword & Gun, I demonstrated it when generic class extends physical object class. Also I used in game for updating agent, as matter of fact I used it as dual (agent as thinking object and model as physical object).

World is too much for light framework, but it will needed for complex calculation. Example for now would be Recast Navigation (please, do not ask me when it will be completed

MonkeyBrainsAppState should update all agents in game. It is based on Entity system.

I hope this explains my plans for MonkeyBrains and why the things are now as they are.

I know the struggle to make things abstract and also useful at the same time.

The problem is if we assume too much about the “universe structure”, we will missed a lot of features that should be easier to adapt if we don’t assume that.

Java utils library itself does excellent work in not assuming anything, to be used as generic as possible. I think we should continue to make it that way, stick with Collection, don’t force an Event mechanism but let the user give their own.

I’m talking about blackboard architecture for example. An Agent will want to contribute its knowledge into knowledge base by giving a way a piece of data call “Signal”… This is depends in user implementation. Signal can be anything from primitive (numbers) to complex data.

To support this kind of flexibility, we should not:

I will give two examples how I do this differently in several projects:

Then later if you want to debug the game AI, you just make a Swing frame Subscriber that take signals and display in another thread (Obsever pattern).

This is incredible transparent, composable and extensible. So user can make up their own solution, make component and contribute back. I’ve learned from various of sources, and sell my Unity AI components for living.

I suggest you take a look at RxJava’s Obsever pattern to see how their wrap their mind around real-time pipeline and events. I’d like to think about AI is nothing then a stream of ideas, that’s why I looked at RxJava intensively and comeup with this.

It’s modern and cool as hell at the same time!

And maybe a video of how cool a Rx can be in game. 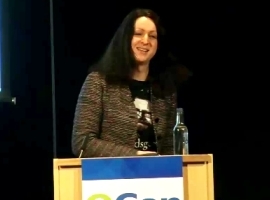 What Every Hipster Should Know About Functional Reactive Programming

Bodil Stokke demos building a complete video game from nothing in the span of a conference talk using functional reactive programming.

For character-based game, which FPS or Fighter game for example is a candidate:

Behaviour that related to Spatial infos (positions, boundary, visibility) should be implemented in JME (I’m afraid of making this to wide without focusing into anything; in other engine, it can be different)

Please proceed the discussion on this thread What's happening with MonkeyBrains?