I need a bit of help with vectors and direction. As I tried to create AI car which steers and move itself to the some point on the map, the car steers only to match the direction of the vector I told him to go. But it would be nice, if the car steers to the exact point. And yes, I’m using a part of code from MonkeyZone class AutonomousVehicleControl.

For example: the car starts at vector A (0, 0, 0), I tell it to go to vector B (0, 0, 10), the car will go straight forward because it match the rotation to vector B. BUT if I move the start point of the car to (5, 0, 0) but keep the rotation, car go again straight forward to the “vector B”. The problem in this case is that it misses the point and will go forward till the end of map.

I need to calculate new vector, what stores the direction between car and point and by which car can steer to the told point. Basic diagram below. The green point is location on the map, red one is vehicle, where arrow shows forward vector of the car. 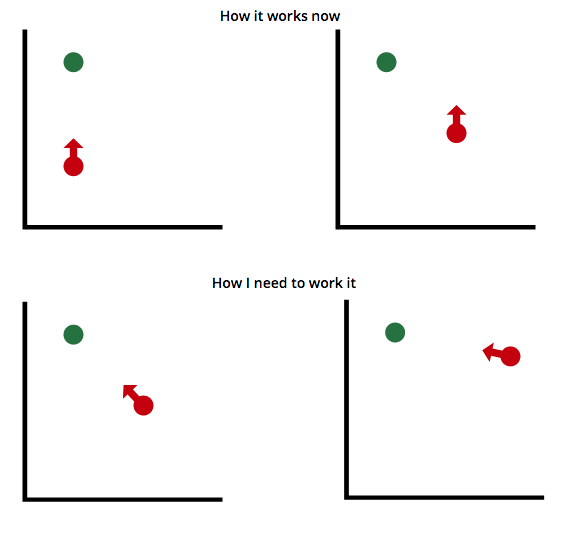 I failed in solving this math problem

Thank for any help (or docs, topics where it has been already solved)

it will be just vector.

How can I calculate the rotation value of a model to look at a position? General Help

I need the Y rotation to rotate the head of tank animated not fast in one step. I need the Y value to use it in this way: public void head_to(float deg) { Quaternion qua = new Quaternion().fromAngleAxis(FastMath.DEG_TO_RAD * deg, new Vector3f(0, 1, 0)); Tween rot = SpatialTweens.rotate(head, head.getLocalRotation(), qua, 1f); anim.add(Tweens.smoothStep(rot)); turning_sound.playInstance(); }

Thank you guys for every post. I’ll look at in next days

Now just have to do the calculating for steering. Car steers only left. If the target is on right side, car does the 270 degree rotation (90 degree steers left, then steers right but go backward, and at 225 degree steers left again to match the new direction)

I went over how to do this without angles here:

How can I calculate the rotation value of a model to look at a position? General Help

If you can only turn left or right to get there… then the target is either “turn to the left” or “turn to the right”. How would you calculate that with a y angle? With a couple of dot products it’s simple. Given: Spatial target, Spatial player… we want to figure out if player should turn left or right: // Find the direction we want Vector3f relativeDir = target.getWorldTranslation().subtract(player.getWorldTranslation()).normalizeLocal(); // Find the direction we're looking and the left ve…

This doesn’t work for me. If the target is on X axle on the right side of the vehicle, in “left” it won’t have value like -1 or 1. When moving to the right straight to target It has value from -1 to -50. I need to calculate some float which will say if the target is on left or right in any direction of the car, not only the X or Z.

The float which will tell if the angle should multiply by -1 or not.

If you have a vector pointing left and a normalized vector of the “other object” relative to the ‘steering’ object then the dot product of those two vectors will be between -1 and 1.

Gonna try it. Thank. I’m going mad with these vectors