First day of coding in 2017… Temporal Reprojection, which will form the foundation for a better quality and faster post effects pipeline :: 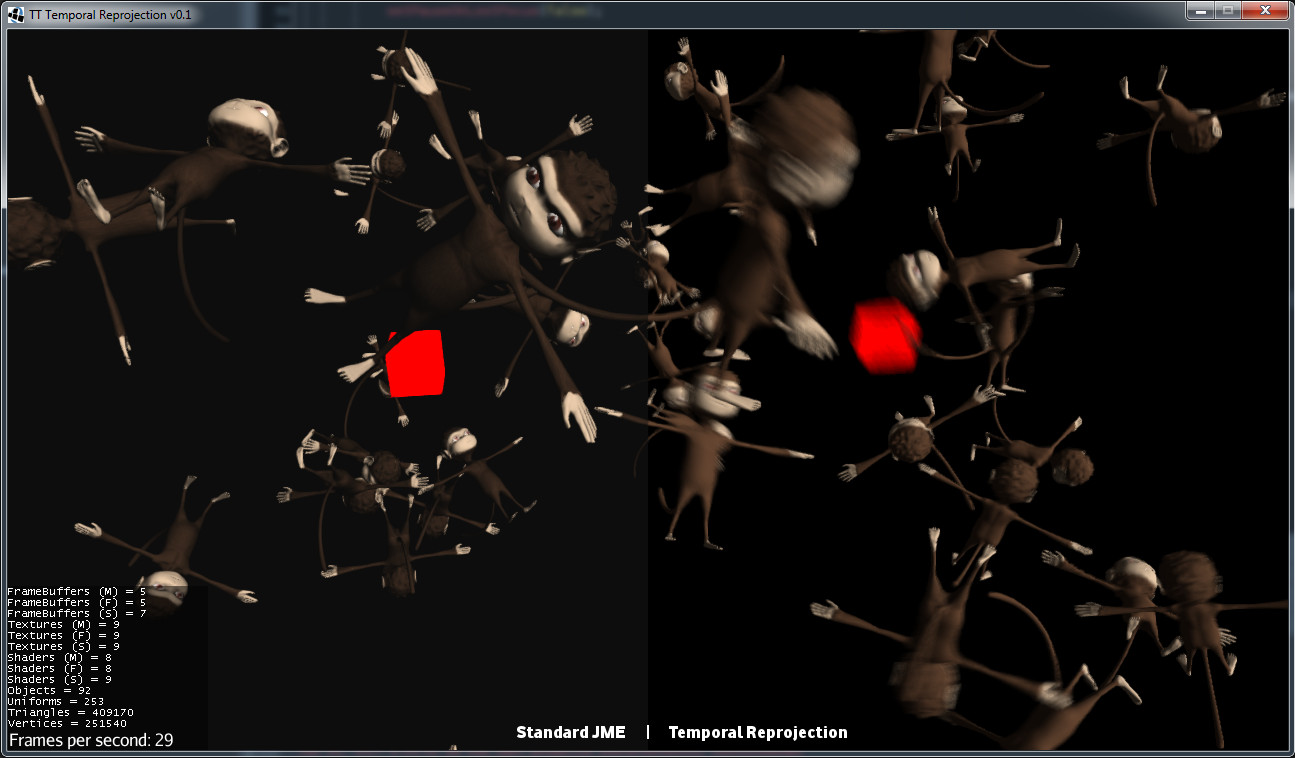 and a video that is over saturated and ass or whatever. Left side is normal jme, right is using a Temporal Reprojection Filter, visible in the form of exaggerated motion blur.

This past weekend I started getting joints working in my physics engine… Sunday I was going to take a video but fraps was slowing my app down to 3 FPS. In the process of trying to sort that out I rebooted my machine and discovered it wouldn’t. I’ve been taking drive images and backing things up every since.

I feel that “Like” is probably not appropriate in this matter. Hope it works out.

I’m still not completely sure what I’m looking at, but I like it

I’m still not completely sure what I’m looking at, but I like it

Exactly what I was feeling when I saw that.

Do I understand it right that it’s some form of a blur filter?

Do I understand it right that it’s some form of a blur filter?

I think yes but iirc it uses data from previous frame, matching stuff up?

From my understanding, it’s basically scaling with built-in AA. Storing a history of three frames and thus being able to discover each pixels vector (direction) and as a result, it’s potential future, and sample (second-guess) it at a higher resolution. So a 720p could become a 1080p game, without the disadvantages of doing so…?

Your demo proves your implementation works with moving objects and light/shadow. 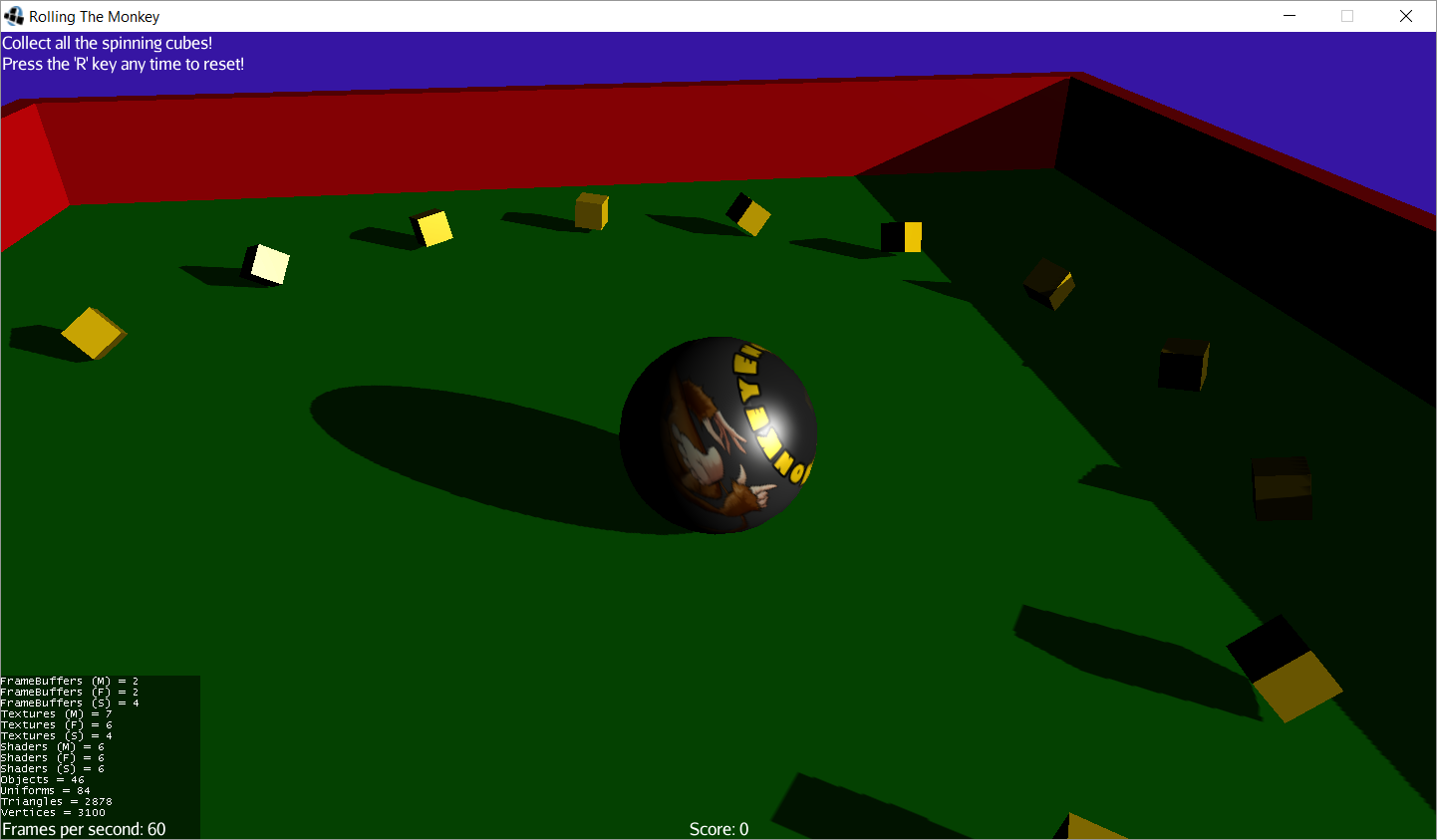 Hello I was hoping to get a simple example game into the jme-examples project. It’s not much but it is one class like the others. and only uses one asset from the core project. technically it is a complete game…LOL even though there isn’t much challenge to it. [Rolling The Monkey]

Working on a new android game,here’s a little demo. All you have to do is making the ball run for as much time as possible,switching various forms to adapt to the ground,otherwise the ball will fall in the dark.

Temporal Reprojection as I’m using it, is basically keeping reference to previous frame’s space translation matrices e.g. WorldViewMatrix, then combining that with the current frame’s information to regenerate the last frame (or frames).

Using this information results in motion blur, as in my example, being trivial to implement (you get a velocity buffer virtually for free, which you use to blur the frameBuffer).

I plan to leverage this for SMAA, Subpixel Morphological Antialiasing, which sort of antialiases across frames to get a cleaner result. I also want to this to improve ray casting or marching operations in three ways :

Here’s a video for my one class game…LMAO 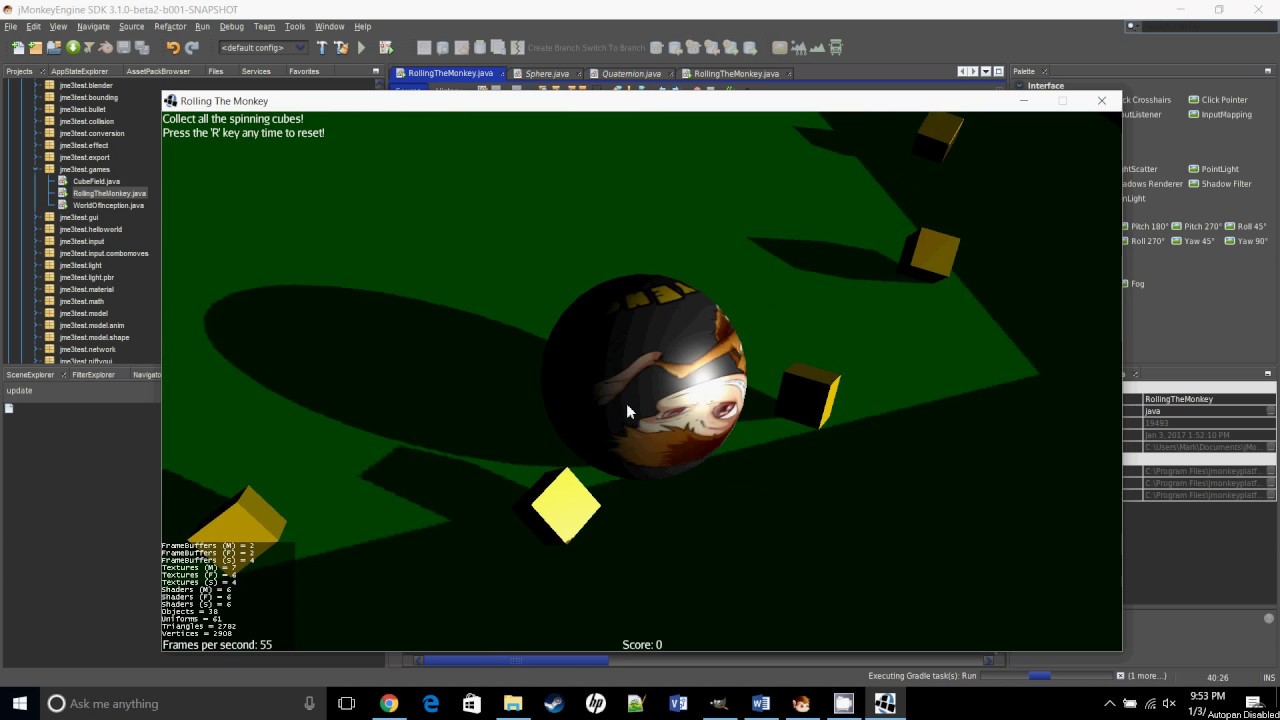 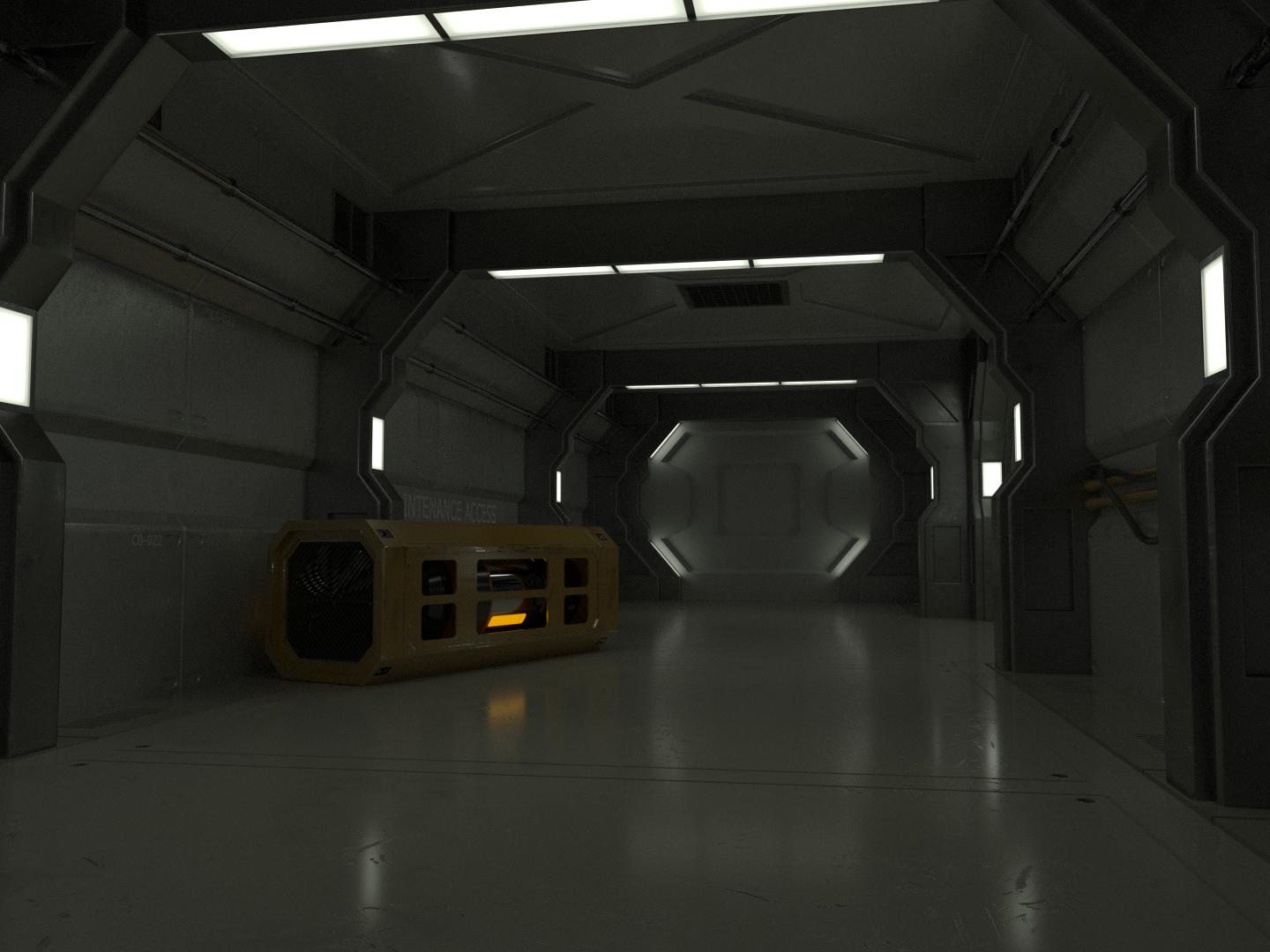 background image I made in blender, nothing exciting just a relatively empty corridor section. To be used in JME though so it still counts as JME work

I know this is the WIP but I have a question I didn’t want to make a thread for - what motherboards can you get to support 4 or more graphics cards? How do people put together computers that have 6 or 12? I am pretty sure they weren’t sort of… server rack types, the ones I’ve seen that is.

It depends on what you want. PCI-Express 2.0 (x16) is the equivalent (laymans term) of PCI-Express 3.0 (x8) - but triple cards are the norm for high-end gaming rigs. Six cards are usually bitcoin miners and render monkeys. They wont be cheap - but don’t fall for the marketing hype - do your research. I have an ATI 7970 in a single x16 slot. Two of these cards couldn’t even saturate a single x16 slot. So really I could have dual x8’s or triple x8’s. 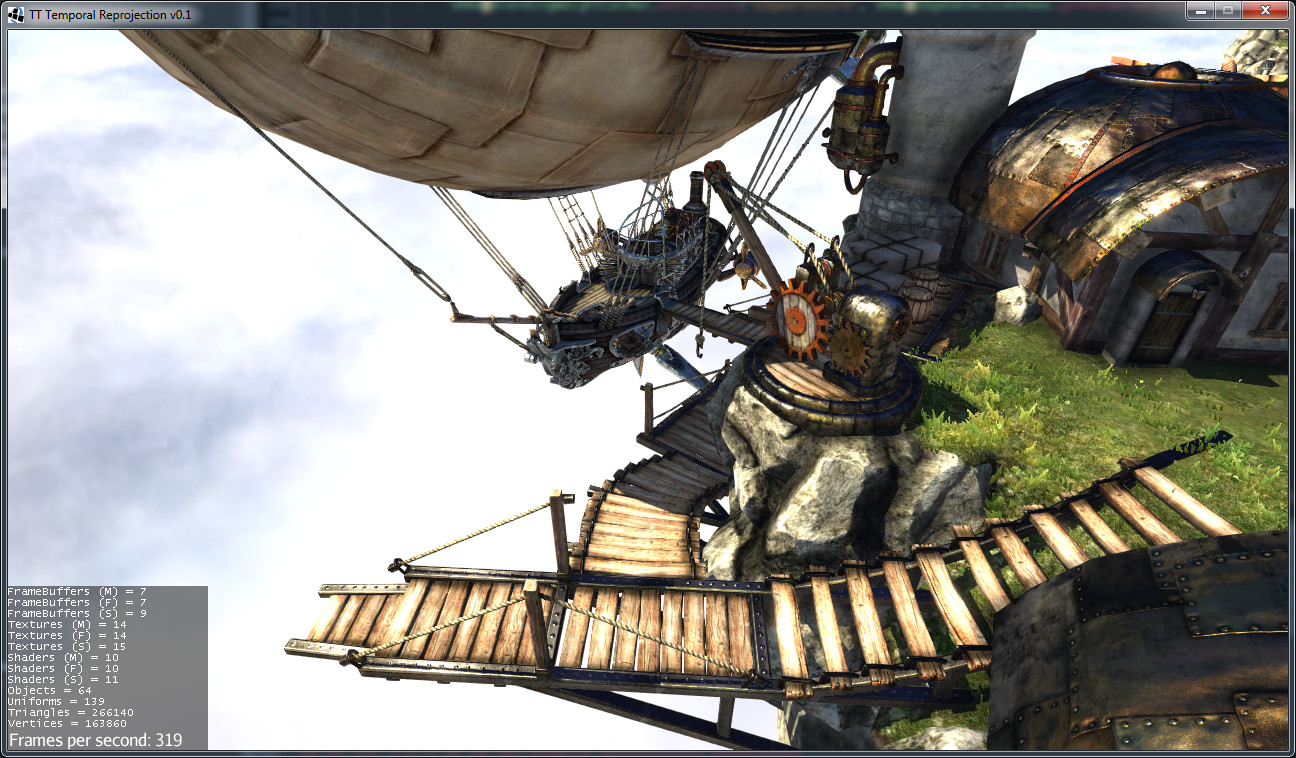 no AA for comparison

(the image is just a screenshot, it’s not from a jME game.)

Arcade/sim blend racing game with terrain based randomly generated terrain and roads (although i have recently broken that). Has a few cars and other maps to play.

Can be played from http://murph9.com/mygames.php, requires java8 and a not terrible computer. 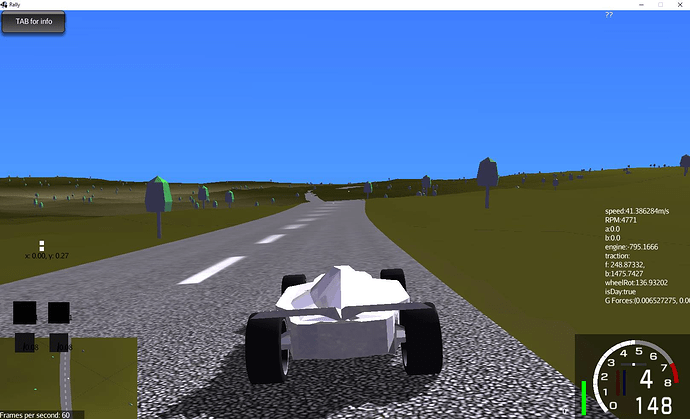 The cars are fun to drive, but I’m missing any sort of mouse camera controls. Also can you go backwards? Pressing S seems to only brake, is there a way to manually shift?

Oh and how do you do the tyre marks btw? Texture splatting or projections or something else entirely?

randomly generated terrain and roads (although i have recently broken that)

You hear that?
That is the sound of progress, my friend.