I am currently working on this issue#1649, and i want to know your opinion (not really reviewing the PR, as it’s not finished yet, but if you want to review, feel free to do so), the PR:

This is initial implementation for the testable api, targeting issue #1649. …**Note: this PR isn't yet mature to be merged and i know this, it still lacks some docs (+ package-info) and clean-up, i will work on it the next 2 weeks, but let me know your opinion about the approach in general.** This is a video demonstrating testables in action : [![Video](https://user-images.githubusercontent.com/60224159/170361202-c6c75a54-4197-446a-a653-fbe2fb2b7e7d.jpg)](https://www.youtube.com/watch?v=u9biai9Yg38) FAQ: **How can i make my own test ?**: A: Your test should `extends JmeTestApp` or `JmeTestState`, in either cases, you will override `launch()` method and add what you want to test there, whether a `JmeApplication.attachState(this); for AppStates` or `setting up AppSettings and start()` or `setting up a JmeSurfaceView for android`. **Does this approach provide a recursive way of opening a package ?** A; Yep, all you need to do, is to give the package, which can be done by 2 methods : METHOD-A : ```java TestableExecutor.execute("jme3test", "--No-Data--", signatures); ``` METHOD-B : ```java TestableExecutor.execute(Main.class.getPackage().getName(), "--No-Data--", signatures); ``` **Can i test multiple packages that aren't on the same tree, at the same time ?** A: Yep, just use : ```java TestableExecutor.execute(new String[] {"jme3test.app", "jme3test.animation"}, "--No-Data--", signatures); ``` **Can i use multiple signatures in the same `@Test` annoation ?** A: Yep, use this : ```java @Annotations.Test(signatures = {Launcher.SIG_WATER_FILTERS, Launcher.SIG_ALL}) ``` But, no `@Test` repetition...it complicates simple stuff and not clean anyway. **What will happen if i have non-class files on my package** A: Don't worry, the utility skips those. **What will happen if i have other classes not implementing the Testable ?** A: Those are skipped too. **Can i use this on android ?** A: Theoretically, you can, but i haven't found the time to test that yet. **What will happen if i extended JmeTestApp and didn't add a `@Test` with a signature ?** A: The utility will exclude this test, because how should it know 'is it ready to be executed?', if you want to run all Testables under a package then use a unified signature in all those classes, for example, add this to all the testables you want to run `Launcher.SIG_ALL` while you can still use other signatures to filter your tests for other run configurations : ```java @Annotations.Test(signatures = {Launcher.SIG_WATER_FILTERS, Launcher.SIG_ALL}) ``` I think that is it, for now, if that is what you are seeking, then i hope it will be helpful, please give a quick review. EDIT: An example: 1) The Testable class : ```java package jme3test.app.test; import com.jme3.testable.impl.JmeTestApp; import com.jme3.scene.Geometry; import com.jme3.scene.shape.Box; import com.jme3.system.Annotations; import jme3test.Launcher; @Annotations.Test(signatures = {Launcher.SIG_ALL, Launcher.SIG_APP}) public class TestBareBonesApp extends JmeTestApp { private Geometry boxGeom; public static void main(String[] args){ new TestBareBonesApp().launch(null); } @Override public void simpleUpdate(float tpf) { super.simpleUpdate(tpf); boxGeom.rotate(tpf * 2, tpf * 4, tpf * 3); } @Override public void simpleInitApp() { // create a box boxGeom = new Geometry("Box", new Box(2, 2, 2)); // load some default material boxGeom.setMaterial(assetManager.loadMaterial("Interface/Logo/Logo.j3m")); // attach box to display in primary viewport rootNode.attachChild(boxGeom); } @Override public void launch(Object userData) { super.launch(userData); start(); } } ``` 2) The Launcher (main class) : ```java package jme3test; import com.jme3.util.TestableExecutor; /** * Tests the new jme test api. * * @author pavl_g. */ public class Launcher { public static final String SIG_ALL = "ALL"; public static final String SIG_WATER_FILTERS = "WATER-FILTER"; public static final String PBR = "PBR"; public static final String SIG_APP = "TEST-APP"; public static final String[] signatures = new String[] { SIG_WATER_FILTERS, SIG_APP, }; public static void main(String[] args) throws InstantiationException, IllegalAccessException, ClassNotFoundException { TestableExecutor.execute(new String[] {"jme3test.app", "jme3test.light", "jme3test.water"}, "--No-Data--", signatures); } } ```

Questions i want to ask about the fix:

BTW, this video showcase the Testables in action : 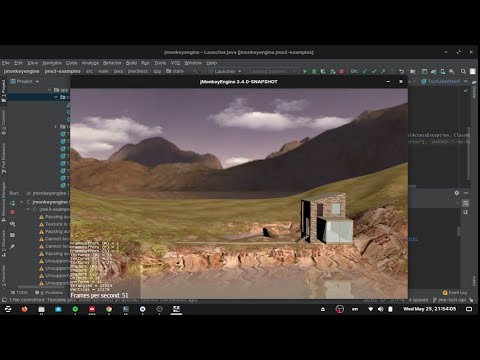 Sorry, im just not sure what could get from this except easier run of some test.

Already at the beginning of the PR, the general approach involving filtering out some of your testcases in some packages and run them synchronously, so test by test…you can read more at the description of the PR

Just so I understand the aim here. This is for launching test cases that a human will look at to decide if JME is working correctly. Not for automated tests. I guess I’m with @oxplay2 that I don’t understand what the aim is (the PR description jumps to how to use it not why and I can’t really follow the video). Wouldn’t an opening menu of example applications that the human tester clicks to launch make sense?

Wouldn’t an opening menu of example applications that the human tester clicks to launch make sense?

Yep, a gui can be built over this simply, you can read the issue also for more…it was an issue initially.

The issue was suggesting to make a better test chooser to select which testcases to debug from jme3test, so i built the pattern that will do so…and the video showcase it, to build a gui test chooser that’s another issue to address and it’s mainly will be built on top of this PR.

ok, i think i start to understand.

We all know current “start window” have a lot problems and there were topic with question if remove it or still have it. There were several system issues and resolution issues with multiple monitor and for me sometimes it didnt draw well.

So in general this PR is API for new GUI Testchooser(that will be created along with this PR), right?
im rather interested what will be used for new GUI there.

edit:
The api looks ok, well, its for GUI only anyway, so i belive it dont need to be super user friendly since its just for clickable TestChooser anyway.

The GUI chooser was an idea came to me several days ago while working on thia issue, though the original issue doesn’t address any kind of GUI choosers, only backend test chooser (and that what i made in this PR, a backend API for selectively choosing which testcases to run)…

The GUI chooser should be deferred to another topic, however its easy to do so, using this backend, just define some constants and a CheckModel that will wrap those constants for the api and execute (edit: also known as MVVM pattern).

ok, got it, thanks

Sure it will help people to use this API for a TestChooser.

thanks again for explain, in my opinion API looks clear enough. I would even say it have more than expected.(signatures i mean)

thanks again for explain, in my opinion API looks clear enough. I would even say it have more than expected.

im rather interested what will be used for new GUI there.

I think we have only one option (swing), since jfx needs quite a bit of exhausting setup and differences between jdks and lemur cannot be used outside of jme.

The api looks ok, well, its for GUI only anyway, so i belive it dont need to be super user friendly

Yes, just basic functional GUI is sufficient, no need to extra frontend stuff (something like the SettingsDialog), but to be honest, from my learned lessons while doing fullstack apps, i did a lot of mistakes and one big mistake was incorporating both the frontend and the backend in a one territory (on the same files), they should be separate and a frontend work would be just an implementation (direct call) to a backend api/code, that way we have made a user friendly maintainable api, just even users can rebuild it for their own projects !

Well, yeah that’s @Darkchaos 's idea…to use annotations to filter testcases, i just applied it in a clear way, hopefully.