We are working on main menu’s background for Skullstone. It would be a video played in loop mode, here is one frame taken from the early version: 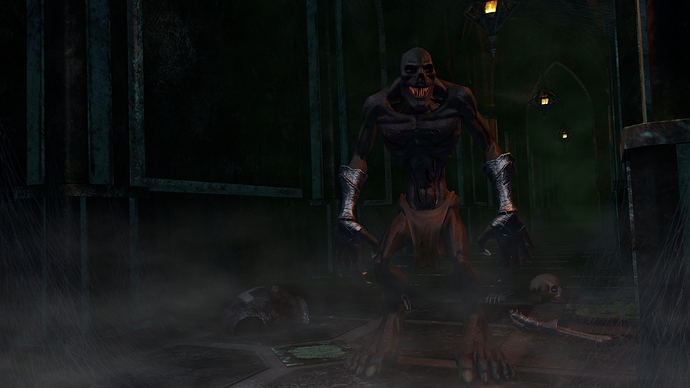 Nice! I like the atmospheric fog and the random objects on the floor. Are those viney things on the sides supposed to be spider webs or tree roots? The look a like tree roots to me.

I’ve also been working on something more eerie than usual. An empty anomaly, inspired by that Star Trek Voyager episode. 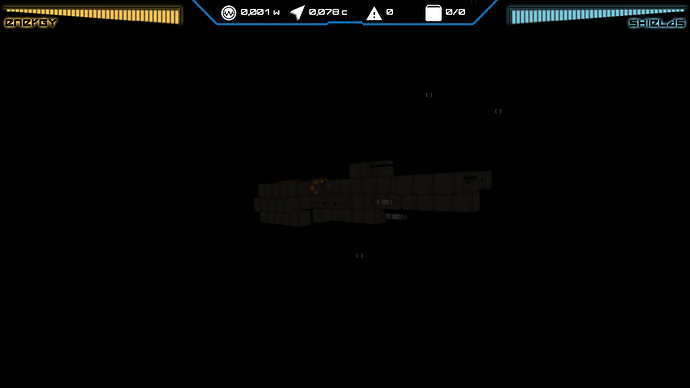 The journey begins by getting close to a black hole. 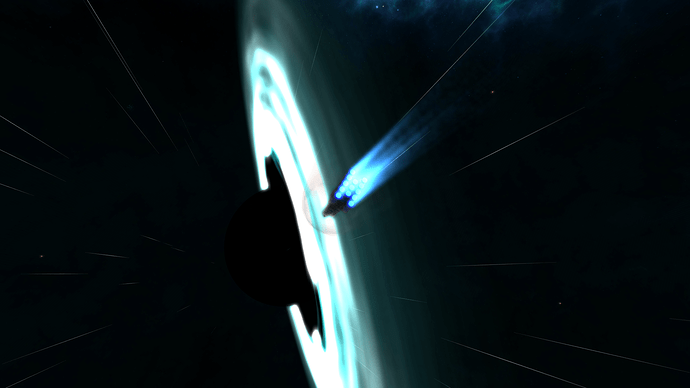 Once you get into a certain range the singularity’s pull increases rapidly, effectively sucking you in like the trope demands.

If you react quickly and reverse course with a fast enough ship) you can escape the pull, but don’t count on it. 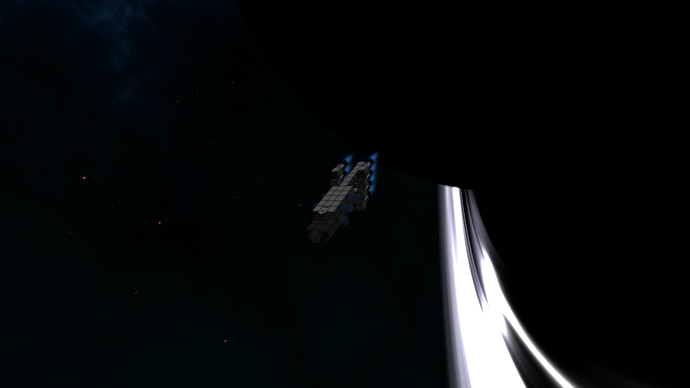 Inside, the interstellar warp chart ceases to work and you have only one way to return to normal space. 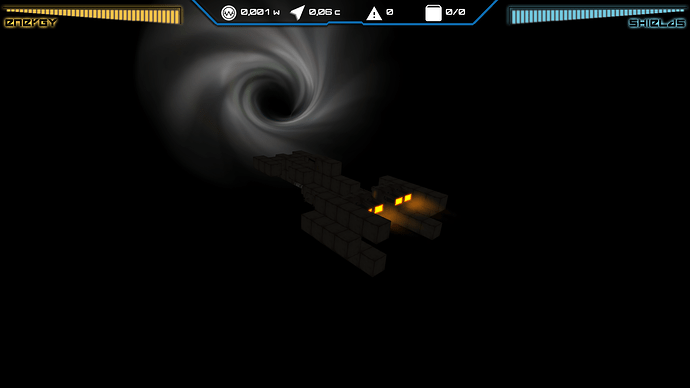 These will appear randomly inside the anomaly and close in a short time (20 - 40 seconds) so it’s a race to get out once they appear. 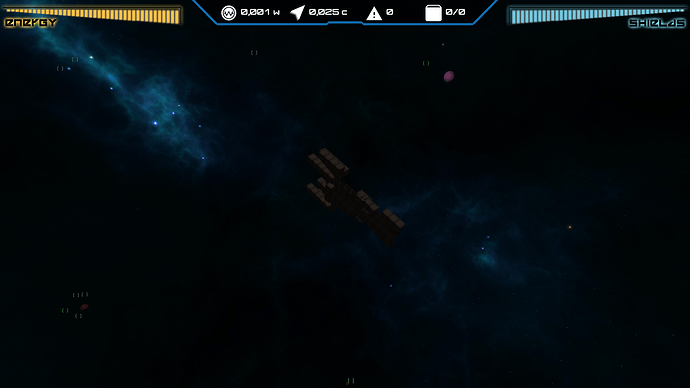 Once you manage enter once of those you are instantly transported back into a random star system.

Something from me:
A model that is going to be used in the endgame, but also maybe before once or twice. Can you guess what it is? 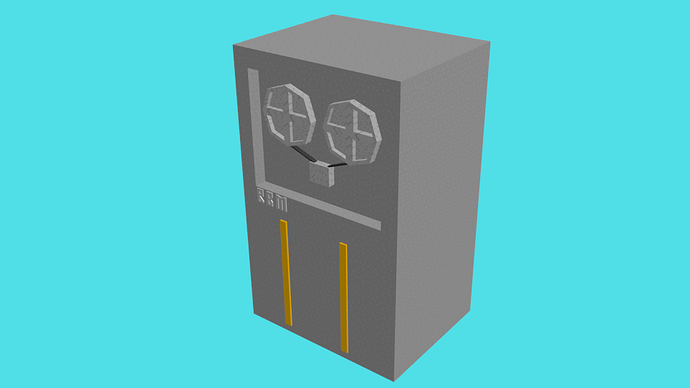 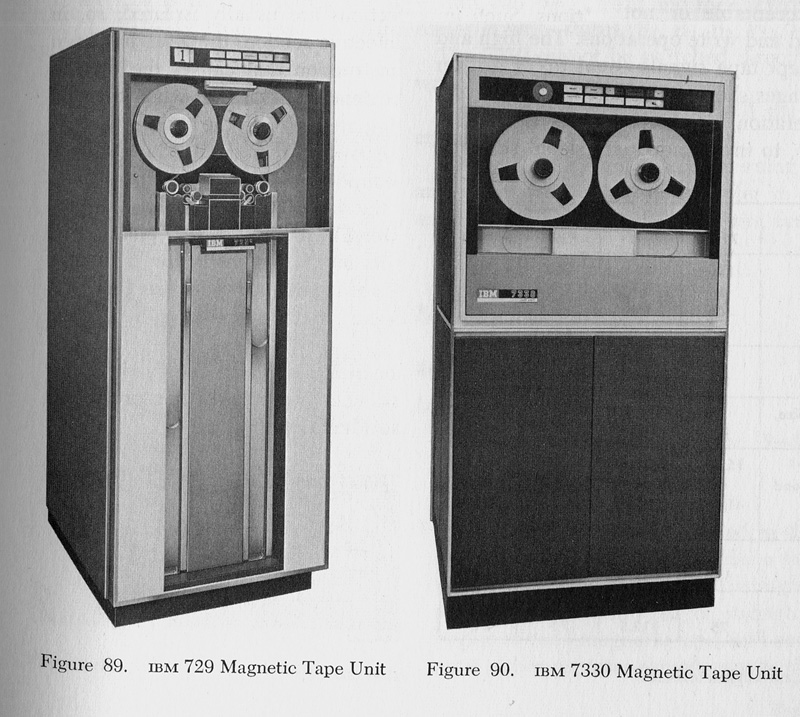 Did I guess right?

Unfortunatelly, the fog would be present only in prerendered video. I have no idea how to make it ingame, influenced by light and shadows.

@MoffKalast That literally was one of the images I used.

Unfortunatelly, the fog would be present only in prerendered video. I have no idea how to make it ingame, influenced by light and shadows.

Hmm, perhaps you could try using particles with a lighted material and maybe add something more advanced like a soft particle gradient when they intersect things.

I wouldn’t make them billboard towards the camera though, just have them be quads that use that [nebula trick] (3D Nebula Graphics (How-to)) and float around with a very slow speed.

Not everything has to be done with super advanced filters

Actually I have an mechanic to light up the particles, but at the cost of transparency (I’m using deferred shading). I don’t keep lights on the scene graph, instead of that I put them directly into renderer.
In theory there is a way to do that, just draw all particles on the scene, after the deferred part, for every light draw every particle in its radius, apply shadow and calculate light… heavy thing.

Hellow! Still late in every schedule but here is some more stuff for this new month. Integrated the DING outline filter, added the concept of a group and level scaling for the monster, did some more job on the animated texture front, and bought and integrated a flying golem. Some information display on the combat part, and turn display is also pretty much done but I’ll show that later. So ya stuff

Still preparing the big update for recruitment sake but most members are late so far and so am i x) If everything goes great the 3D model of the berzeker woman will be finish eventually, same for the 2D concept art of the bandit. Also a brand new connection server page interface.

So ya, here is some gifs x)

I made some progress in my game project I’m working on. I can not open and close doors, can solve simple puzzles (that I could as well in the last post), I have a effect system integrated, I get hints when I click objects and I can talk to opponents. I even have i18n integrated by now 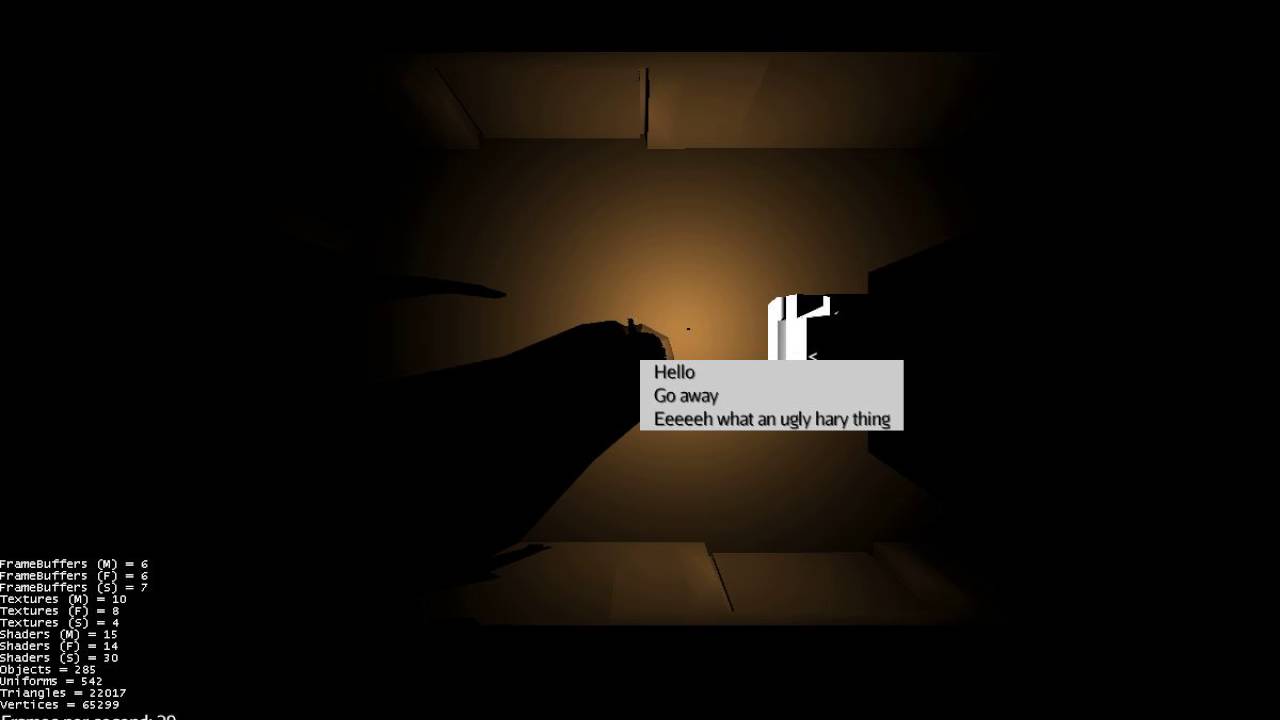 I will improve now as well the talk by animate the talking on, make that opponents walk around and I also have sound on the plan. Of course I also want to improve the graphical stuff but at this stage it is not that important, first the mechanics. 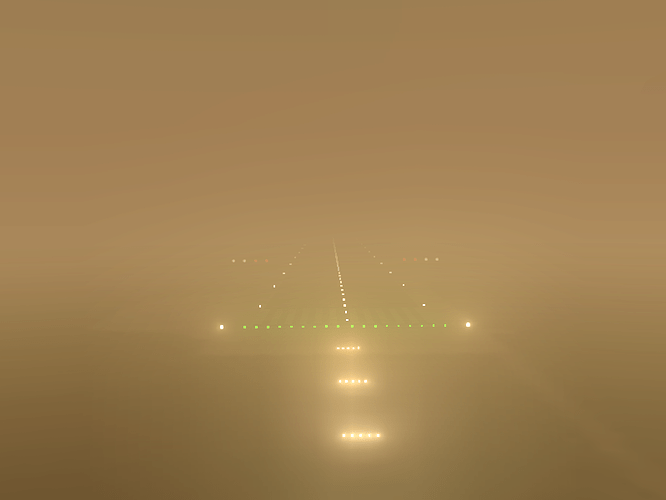 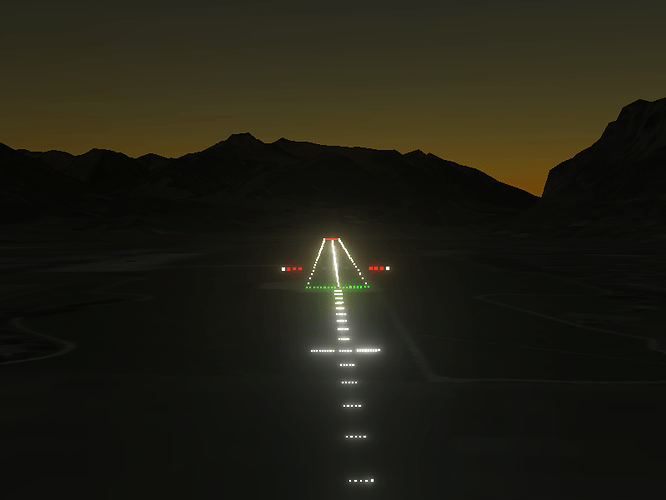 how
does it work ? I always fund the default bloom unsatisfactory, but have not found a viable performing alternative

Well, I use the extract pass of JME’s bloom filter and generate mipmaps of the rendered texture down to a resolution of 3x2 pixels (or so). I then sum all the mipmaps with a certain weight, which is increasing with decreasing mipmap size. Voilà.

It suffers from a blocky blur due to the nature of mipmaps, so you have to be very careful with the settings, in particular the weight factors mentioned above.

Upon generation of the mipmaps I use the center pixel and its eight neighbors, this makes the blur look more softly when the camera is moving, especially with all those bright points in my scene.

What would be the preferred way of sharing?
Copy-paste into forum?
GitHub?
Downloadable Zip?

(I’m asking because I’m a beginner in opensource.)

Well, a github repo would be the best solution yes.

Ok, I will start learning how to set this thing up. Expect a bloom shader in a couple of days there!

(Minor changes to do first)

JPony plugin for the JME SDK. Yes , I named it JPony.

The plugin automates common core features you find in most modern games. Currently I find it more useful for building open worlds but you can use for about anything your heart desires. I have it about 80% complete and a growing JavaDoc file for it. The following scene took only about 40 additional lines of code to the Base simple application project with the help of JPony … nieeeeegh.

Hey everyone, I just wanted to show the actual game at the moment, if you see some sort of lag/rollback in the video don’t worry it s Xsplit… I don’t know why but it seem it was laggy sometime.

There is no gameplay yet but I’m working on it at the moment. I had to setup the multiplayer correctly first! The whole video is played over a server and the red box is the player location on the server. 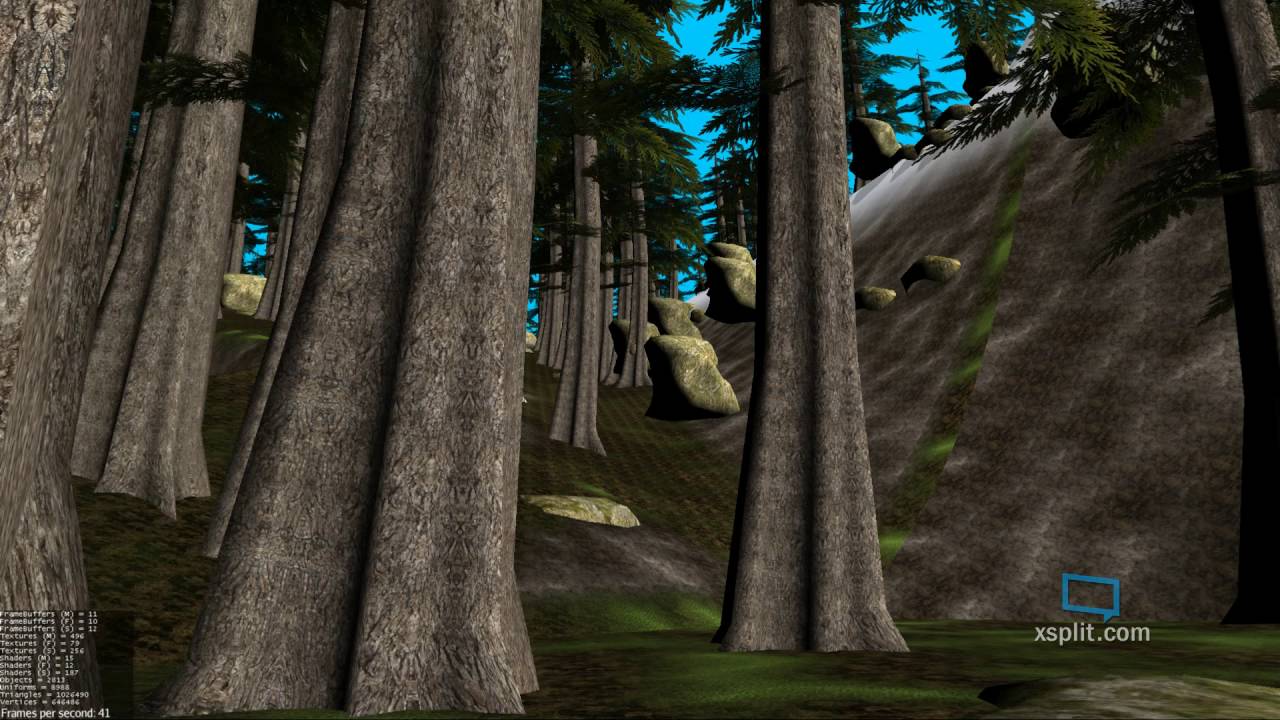