Stumbled upon this little gem. Creating material from an single image, 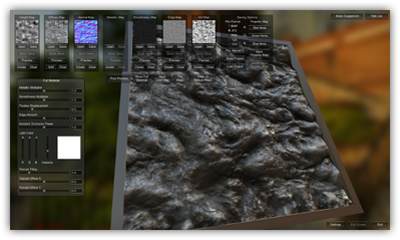 but not sure about license
there was already topic about PBR materials create and was mentioned there.

but sometimes you need to do heightmap manually and use it to create other textures based on heightmap not generated from albedo. in blender you can just have second texture as heightmap.

but please note that in blender there is nice way creating highpoly over lowpoly, then you batch heightmap or normalmap or other map based on difference from highpoly and lowpoly.

but not sure about license

From the FAQ page,

Is there any problem with GPLv3?

Only if you want to use their code in your project. The output of the app should be safe to use.

Been using it ever since it came out and it’s pretty good. My only nitpick with it is the fact that it exports Shininess map instead of Roughness, so I have to invert it manually.

Only if you want to use their code in your project. The output of the app should be safe to use.

you sure about it? GPL is very infecting license. Thats why i said im not sure about license. its logic like using photoshop or any other bought program you can use output(if they dont have special license points), but i was always not sure if something is marked with GPL license (as free product)…

GPL doesn’t extend to the output, unless it contains parts of the original software or calls to its apis.

In what cases is the output of a GPL program covered by the GPL too? (#WhatCaseIsOutputGPL)

The exception would be when the program displays a full screen of text and/or art that comes from the program. Then the copyright on that text and/or art covers the output. Programs that output audio, such as video games, would also fit into this exception.

If the art/music is under the GPL, then the GPL applies when you copy it no matter how you copy it. However, fair use may still apply.

Keep in mind that some programs, particularly video games, can have artwork/audio that is licensed separately from the underlying GPLed game. In such cases, the license on the artwork/audio would dictate the terms under which video/streaming may occur. See also: Can I use the GPL for something other than software?

When is a program and its plug-ins considered a single combined program? (#GPLPlugins)

It depends on how the main program invokes its plug-ins. If the main program uses fork and exec to invoke plug-ins, and they establish intimate communication by sharing complex data structures, or shipping complex data structures back and forth, that can make them one single combined program. A main program that uses simple fork and exec to invoke plug-ins and does not establish intimate communication between them results in the plug-ins being a separate program.

Using shared memory to communicate with complex data structures is pretty much equivalent to dynamic linking.

If I write a plug-in to use with a GPL-covered program, what requirements does that impose on the licenses I can use for distributing my plug-in? (#GPLAndPlugins)

If the main program and the plugins are a single combined program then this means you must license the plug-in under the GPL or a GPL-compatible free software license and distribute it with source code in a GPL-compliant way. A main program that is separate from its plug-ins makes no requirements for the plug-ins.

Materialize show output in renderer so its like full screen output, but then it can be saved into file.

what about this line? saved file is same as visible output, and based on this line its exception so under GPL right? (as i understand correctly)

i understand its fine to use it because probably most people use it(and nothing happends), but GPL description is very problematic like a lot people already told me and i agree.

If your gpl program outputs audio or video that comes from gpl resources, you can’t grab it and relicense it.

For example, you can’t record the sounds of a gpl game or screenshot the sprites and expect them to not be under gpl.

In the case of materialize what is shown is user generated content.

By the way GIMP and Blender are both GPL software.

like i said, i dont say its illegal use GIMP/Photoshop or materialize or any else output, because everyone use its output without problem. (at least i dont heard about any)

i was just confused about gpl description. “art that comes from the program” to be under GPL. (and here is nothing about user generated content via gpl program, maybe somewhere below or in other description)

i dont have time read all carefully now, so i will anyway just ask friend lawyer abut this exceptions.