not sure why it happened.

I got 2 models, with similar armature.

First is exported via gltf so have different bone names like “Armature_Something” other was blender file exported so have just “Something”.

Anyway i use same test java files for both, the only difference is in bone names and file to load name.

And only with character First model i receive exception like:

even when i add only “ragdoll.addBoneName(“Armature_Root”);”

i dont have this error when i add non exist bone like “ragdoll.addBoneName(“dsfgsdfghdgf”);”
but then ragdoll dont work ofc.

what can be the issue? gltf importer issue?

I don’t know what version of JME you are running and the stack trace doesn’t line up with the current source code… but an educated guess is that the ragdoll util is assuming that all bone indexes will be bytes but gltf is importing unsigned short buffers.

I think this is a bug/limitation in the ragdoll utils… it’s just expecting a very narrow type of model.

DynamicAnimControl is more flexible than KinematicRagdollControl. It handles bone indices that are unsigned short.

about DynamicAnimControl :
yup, i awaits for this one. it will be in JME 3,.3 right? as this is feature. i dont want create jme fork

Anyway about KinematicRagdollControl:
it works, but if i export SAME model via blender exporter in SDK.

so i really also not sure if DynamicAnimControl will work too. because it looks more like exporter issue?

If you’re on JME 3.2, you can start using DynamicAnimControl any time you want. You don’t have to wait for JME 3.3 to be released.

I agree with @pspeed that the differences you’re seeing between glTF and straight Blender probably have to do with the layout of the bone-index buffers. I’ve tested DynamicAnimControl on a similar model (glTF with 16-bit bone indices) and it worked. Of course, without access to your models, I can’t be sure they will work.

Of course, you can open a GitHub issue for KinematicRagdollControl not working with 16-bit bone indices, and I’ll fix it if I can. But I see that route as a dead end.

By the way, Bone.setUserControl() is a feature of the old (pre-3.3) animation system. It will be deprecated in JME 3.3, as will KinematicRagdollControl.

How can i use it then? i thought i need create jme3 fork and add jour job there.

about deprecated Bone.setUserControl() - what should i use then for customizing character? currently it works perfect for me - i can customize character and it work with animations.

edit: ahh i see, there is removed line “which is part of the Jme3-utilities project” in your post. so its only Minie project related? im not familiar with it much. just wanted DynamicAnimControl. Anyway if you can instruct me where and how add Minie i would be grateful.

I’m on 3.2.1-stable-sdk3 myself, so I can certainly instruct you. I’ll need to know which build system your project uses: Ant or Gradle?

thanks Stephen, i use Standard JME IDE(Netbeans based one) that use Ant, nothing changed, all configuration are default (almost all, because there was added some code encoding on full build(not runtime) by team member, but anyway it was disabled temporary as i know)

I just wrote up some detailed instructions for adding Minie to an existing JME project:

I welcome any constructive feedback on this document.

The physics API is about 90% unchanged from jme3-bullet to Minie. The biggest changes
are the removal of CharacterControl and KinematicRagdollControl.

I expect the hard part will be switching from KinematicRagdollControl to DynamicAnimControl.
The code in the MinieExamples subproject may prove instructive.

Feel free to post questions/issues here or send me a private message. I’ll support you as best I can.

thanks, will try it for sure.

), but i understand there are some alternatives so can replace with something.

Most important is ragdoll so will try it first place. Also important is maintain Character customization i made. You said that Bone.setUserControl( will be deprecated. Could you please tell me if there is some alternative or why its deprecated(i understand there is other way, or just dont need set it?)

anyway i understand it will come to JME in future release( i hope so) not sure why you dont have core developer, but hope you will get soon

Bone.setUserControl() is still fine for JME 3.2.x . It won’t be deprecated until 3.3 .
I’ve haven’t looked much at MonkAnim (the JME 3.3 animation system), so I’m unsure
what the JME 3.3 equivalent of setUserControl() would be. Perhaps simply
mask off the Joint in the AnimationControl?

With DynamicAnimControl you can have as many (or few) kinematic bones as you want.
So you could have the arms, legs, and neck dynamic but keep the facial bones kinematic.
There maybe some issues if DynamicAnimControl tries to clear the user-control
flags on those bones. We’ll see…

all fine, but when i added All Jars, i still dont have for example:

am i missing something? 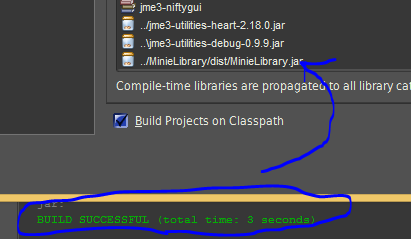 also anyway some tests dont have this issue, but when try run them i got:

(as i understand i properly get rid of native bullet JME libs, replacing them with Minie Jar, so why it dont work?)

UnsatisfiedLinkError is about JNI c libs right? should i include it somehow to classpath?(this bulletjme.dll but idk where it is) hoped there will be less dependencies

That MinieLibrary.jar looks like something you built yourself. To get you started, I recommend downloading the prebuilt JAR from GitHub.

right, i even mark i build it myself. thought it will work, ok will try use ready2use one.

ActionApplication is only needed to run the examples. The Minie library doesn’t need it.

Since the examples don’t include build instructions for Ant, the easiest way to run them is to install Gradle.

ok, but as i understand im ready to make tests myself based on tests source code.

the only thing stay to fix for me is this error

that im not sure why its needed, maybe i messed something with project, because JME projects see them, or its Minie exclusive?

where is bulletjme.dll, because currently i dont know.

Yes. ActionApplication is found in the jme3-utilities-ui library. It extends SimpleApplication.

With jme3-bullet the bulletjme native libraries are typically provided by
a separate jme3-bullet-native library. With Minie they’re included in
the class JAR. If they’re missing, it’s likely because your MinieLibrary.jar
wasn’t built properly and omitted them.

right, anyway when i use ready2use Jar of minie, it works. 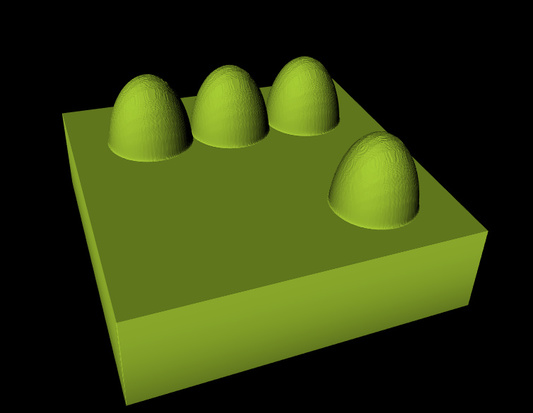