I want to make a game where a flying saucer (the player) drops a wrecking ball to knock down block structures. My strategy for now is to place the blocks and add RigidBodyControl (along with a position tracker for score tracking) in the scene composer. So far, there is a terrain with a stack of blocks that fall on each other when I hit play, but when I open the scene in game there are just stationary floating blocks. Shouldn’t the physics automatically kick-in when game play starts?

I couldn’t find a tutorial on adding physics in the scene composer, and I looked back a ways in the forums before asking.

You have to create a BulletAppState and add the physics objects in the loaded scene to it using physicsSpace.addAll(loadedScene);

Did you pass a weight more than 0 when you initialized the RigidBodyControl? 0 means static.
edit: nevermind

Thanks a bunch. The physics tutorial make a lot more sense now. I’ve been grinding at this too long today. Want to have something to show by X-mas, ya know?

3D game dev has a steep learning curve, but I think I’m getting the hang of it. 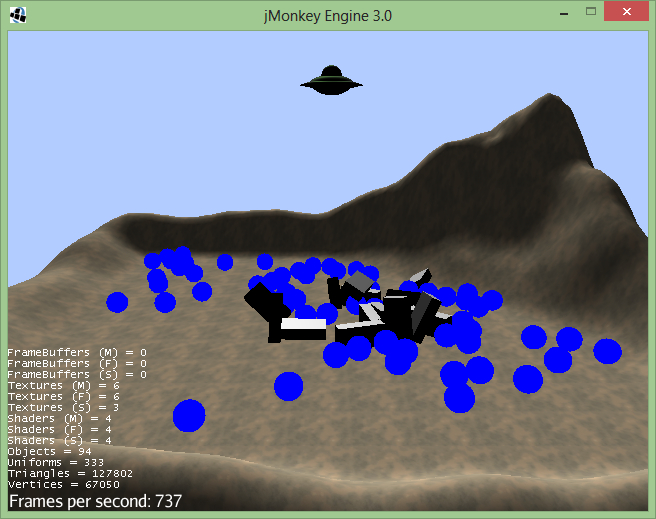 Screen capture of what could be the alpha of my first game!

Btw, I put the origin at the far corner of the building blocks, so much to my surprise the building tore itself apart when I first ran the game. Center of mass is placed at origin eh? :lol: