After falling off the face of the jMonkeyEngine world in June 2014, I’ve pulled myself back together. My first order of business is to revive the SkyControl sky simulation and related projects which were formerly hosted at Google Code. I’ve migrated them to GitHub and am currently in the process of tidying and documenting them.

I’m available to provide support for SkyControl, if anybody’s still using it. I’m particularly interested in making sure it works well in JME 3.1. Also, once I’ve got the Maze Game cleaned up, I’d like to begin recruiting volunteer collaborators.

if anybody’s still using it

Of course we are using it . I was worry you may left it.

but see you moved it to GitHub and continue working on it , makes me happy. This is such a great Christmases gift for me

SkyControl looks really cool but when I follow the instructions I get missing libraries, jme3 and jme3-libraries. How do I fix this?

SkyControl looks really cool but when I follow the instructions I get missing libraries, jme3 and jme3-libraries. How do I fix this?

What version of JME are you using? Do you use the SDK? If so, then just add those missing libraries in project properties (look for libraries).

In 3.0 there were only 2 “big” libraries called “jme3” and “jme3-libraries”. But the packages/jars are seperated.
All you have to do is removing those 2 libraries which have a red “!” sign. Then just add the libraries.
Should look like this: 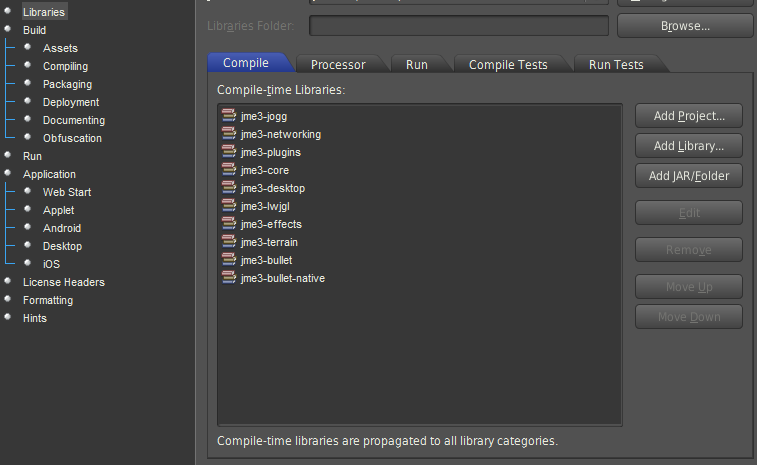 Thanks so much. I will try that.

As of about 10 hours ago, the jme3-utilities project (which includes SkyControl) has a branch for jME 3.0 support. The “master” branch now targets jME 3.1. Both are working, as far as I know, and I’ll be keeping them closely synched for the foreseeable future. This should help reduce confusion caused by missing libraries and the like.

Just a hint there: If the 3.0 version is a SDK project then you can right click “upgrade project” so it updates the libraries. This however won’t solve api changes introduced in 3.1