Rendering only visible Geometries: How to improve performances by rendering managment?

. After the notices about the Cubes library I was working with, I decided to start my own project, and generate a world from noise, with block. I used JME3 's Boxes as blocks, and I used custom textures. The only problem are the performances. FPSses are really low (10 FPSses is the maximum I reached). And there are lots and lots of Objects and Triangles to render, outside the camera too. 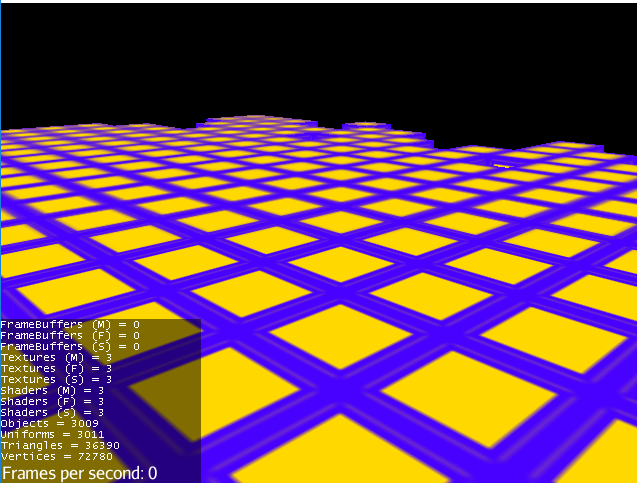 P.S.: How do I render different textures on each side of a box? That will be very useful…

Cube worlds are not made of cubes. As you’ve noticed it is too expensive to render many objects. So the trick is to create a mesh that looks like the surface of a cube world but is actually a larger mesh. There are numerous articles (even in this forum) so search for some keywords like ‘cube world’ or ‘meshing’.
Personally I found these articles pretty good.

Meshing in a Minecraft Game

The last post I wrote on Minecraft-like engines got a lot of attention, and so I figured it might be interesting to write a follow up.  This time I’ll try to tackle a different problem: Meshi…

Thanks so much! I’ll see…

I guess from what I heard and read in this form is to draw only the visible part of a cube and not a real cube. I’m sure you will find some useful hints in this form which are more JME specific and maybe that what you are looking for.

Any specific idea? I can’t find anything

http://alexstv.com/index.php/posts/unity-voxel-block-tutorial
Unity tutorial, but concepts translate almost 1:1 to Jmonkey, I personally have used this tutorial to create a block world in Panda3d Python game engine

Did not find anything on this forum. And code from other Engines it’s not so much useful…

Not to sound harsh, but you might want to pick a simpler game idea until you get better at it. Climbing Mount Everest right at the start is not the best way to work your way into mountain climbing and block world games are almost the hardest kind of game to write.

https://hub.jmonkeyengine.org/search?q=voxel:
Some which I can remember in that list:

Starting work on a voxel-based game - Some preliminary questions SDK

Hello all, I am starting to work on a JME3 game which consists of a cube-based voxel world, a la Minecraft. I tried googling for voxel libraries in JME3, and pretty much everything I found was just people’s personal, half-baked projects but no finished, tested products with documentation and such. Maybe I just didn’t search well enough, and I missed something? If so, please let me know. I did notice the TerraMonkey project and had a brief look at it. From what I can tell though, it is geared t…

Hi, I am trying to create a voxel-based world (e.g. Minecraft) and I would like to know how to implement the Perlin Noise/Simplex Noise for use with jMonkeyEngine. I know there is the cubes plugin for JME but it does not seem to support heightmaps (?). So far I managed to create normal terrain by using heightmaps (following the tutorial on the wiki), water and a skybox. Do you have any ideas/reasources on how this can be done?

Hi, You can get this library here: https://github.com/francois5/voxelengine The code is not well documented yet but I think it’s pretty easy to use and there is an example in the test package. The engine has 3 very simple interfaces that let you define your voxel types and the world generation procedure (the world is generated on the fly). This is my first 3D project and this library is not very good for graphical stuff right now but I will work on that soon.

The tutorial will show how to only draw faces that are needed, and the greedy meshing can be found here:

Contribute to jMonkeyEngine-Contributions/cubes development by creating an account on GitHub.

for the github repo it can be found under: Cubes/src/com/cubes/BlockChunk_MeshOptimizer.java

Hi all, I recently added a greedy meshing implementation to my voxel engine - which you can see in action right here: https://github.com/roboleary/GreedyMesh[video]https://www.youtube.com/watch?v=0OZxZZCea8I[/video] Since greedy meshing is tricky enough - and I haven’t seen an implementation around that accounts for comparison of varying face and vertex attributes during meshing, as well as just simple voxel type attributes - I thought I’d share my implementation. For anyone who’s interested…

And yeah @pspeed already said what I also heard a lot: Cube based stuff looks simple but is not simple. I believe them

I have already worked with Cubes library. It’s not this great thing. Full of limitations…

Yeah but maybe you clone it and go with something existing, is better than nothing. Or at least look how they solved the performance issue you have.

I have already worked with Cubes library. It’s not this great thing. Full of limitations…

Yes, but it’s a working example showing how to construct a mesh from blocks. If understanding that is beyond your current abilities then you should shelve this project until you are better at game development.

You won’t find ready-made solutions without limitations because it’s impossible. There will always have to be design tradeoffs to support infinite block worlds. Always.

I don’t want to shelve this project. That’s my big project, that’s a great idea. I know how to make it. Just performances

I know how to make it. Just performances

Then you don’t know how to make it. Because that’s everything right there.

In a block world, every single decision you make will be performance related.

“I don’t want to learn to swim… just dump me in the middle of the ocean, I’ll be fine.”

We aren’t to discourage you. Quite the opposite. We’d like to see you succeed by picking a simpler project that you might complete without giving up.

To make your own block world you will basically need to build everything from the ground up. You will need to know, quite well, how to:

And that’s just the easy stuff.

And look, I’m not just some random guy who doesn’t know anything about block worlds or picking projects that are too big.

I’ve got exactly both of those things with my project:

Role Crafting Game - What will your story be?

I know how to make it. Just performances

Hmmm but … then why do you ask? I mean the performance issue you have is because you have no clue. I might be wrong, but it does not perform for a reason and the reason is you draw every cube even the ones can not been seen…

That’s the problem. And I asked how to solve!

But I did my part in this discussion and delivered some links I remembered. It may or it may not help. I’m out now of this thread…